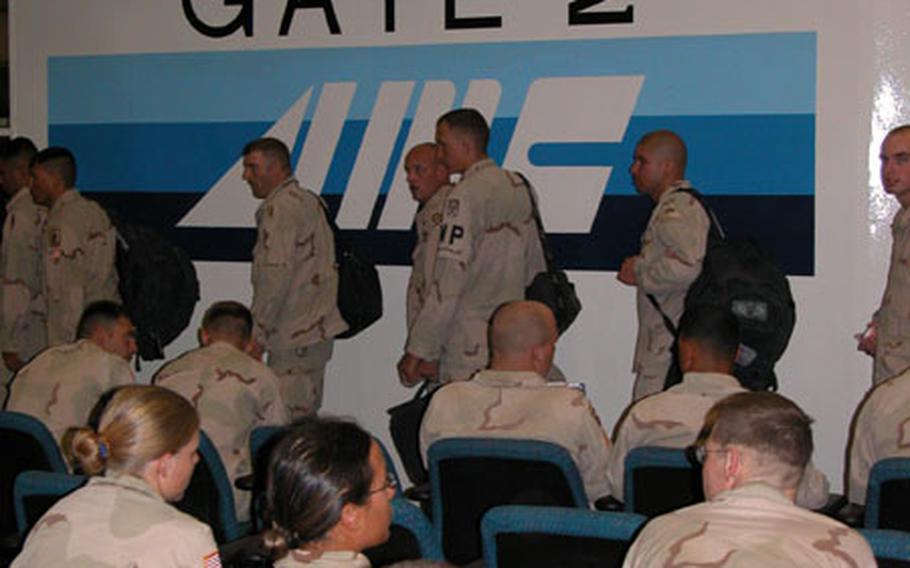 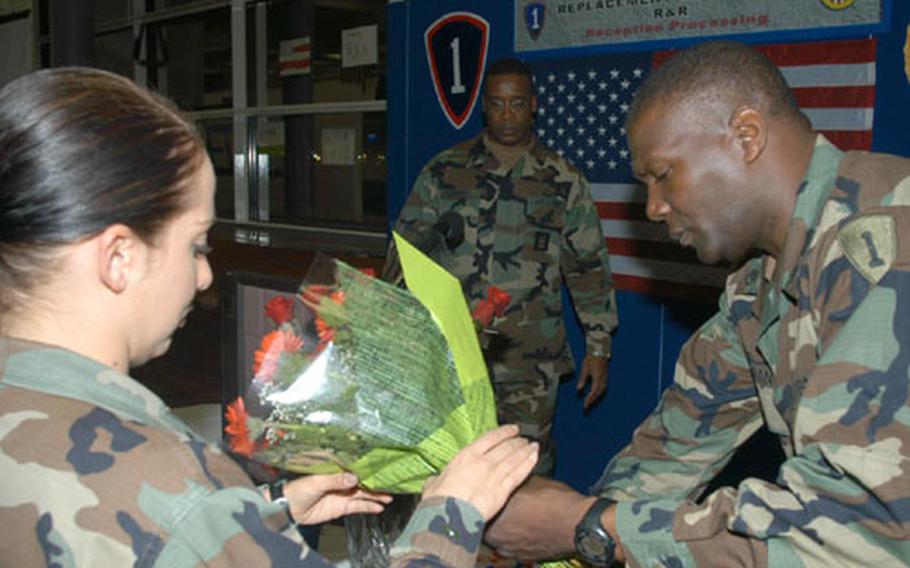 First Lt. Rosemary Reed and Staff Sgt. Tony Jordan of the Army&#39;s 64th Replacement Company at Rhein-Main Air Base, Germany, prepare flowers for the arrival of the first soldiers returning from Iraq on two weeks of leave. In the background is 1st Sgt. Willie Lemons. (Jason Chudy / S&S)

RHEIN-MAIN AIR BASE, Germany &#8212; Her children bundled up beside her, Jennifer Arquette waited anxiously in the cold Friday night air outside the Rhein-Main passenger terminal.

Like many other spouses, Jennifer had not seen her husband, Spc. John Arquette, since February, when his unit was deployed to Iraq.

John Arquette, with Mannheim&#8217;s 181st Transportation Battalion, was one of roughly 270 soldiers whose flight from Kuwait arrived in Germany just after 12:30 a.m. Friday.

The flight was the first under the Defense Department&#8217;s R&R program. Soldiers on board were granted 15 days&#8217; rest and recuperation from their 12-month combat tours.

Other soldiers, who didn&#8217;t want to spend their 15 days in Germany, had to wait another 75 minutes before hopping on a plane headed to Baltimore.

Most troops found out Tuesday that they would be leaving at the end of the week for a little time off.

While most soldiers were able to contact family members about their arrival, others weren&#8217;t as lucky. Pfc. Edward Diaz, of the 501st Military Police Company from Wiesbaden, had a special surprise in store for his wife.

Also waiting for the bus to Wiesbaden was Pfc. Mark Burke, of the 141st Signal Company. His girlfriend is flying in from the States this weekend, and the two plan to &#8220;take it easy&#8221; and possibly visit a spa and Munich&#8217;s Oktoberfest.

Spc. Eric Scott also has no definite plans. He does, however, have a new son to meet, 4-month-old Clayton, and plans to spend time with his daughter, Tyler Sue, 5. His wife, Melinda, said she has meal plans that definitely do not include Meals, Ready to Eat.

While 15 days may not be enough to get back into a regular routine, Valerie Carter&#8217;s time with her husband, Spc. Daryl Carter of the 16th Engineer Battalion in Giessen, and their new baby, Madison Rose, will be a small taste of what &#8220;normal&#8221; feels like.