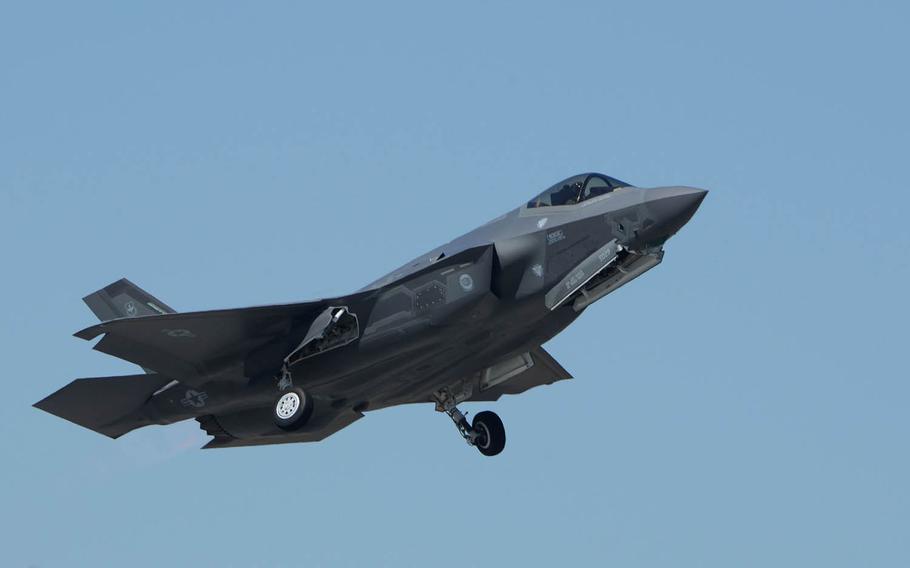 YOKOTA AIR BASE, Japan — Japanese pilots will fly the F-35A Lightning II fighter jet for the first time by year’s end, according to a Lockheed Martin spokesman who was in Tokyo this week to meet with the Japan Air Self-Defense Force.

The first four stealth planes earmarked for Japan will roll off a production line in Fort Worth, Texas, in November, said Eric W. Schnaible, the company’s F-35 international communications manager. Schnaible will also visit Nagoya and Misawa facilities associated with the aircraft later this month.

Japanese pilots are slated to take off in the jets for the first time at Luke Air Force Base, Ariz., where Australian, Norwegian and Italian personnel are already learning to pilot the F-35, he said.

Japan is one of eight countries jointly developing the high-tech fighter. With a price tag of $1 trillion, it’s become America’s most costly weapon.

The Fort Worth facility is one of three places where F-35s are being assembled. The others are Mitsubishi Heavy Industries’ plant in Nagoya and Alenia Aermacchi’s factory at Cameri, Italy.

The first of 38 additional Japanese F-35s will roll out of Nagoya next year, said Schnaible, who is also the former U.S. Forces Japan public affairs chief.

The new jets will be stationed at Misawa alongside U.S. F-16s from the 35th Fighter Wing, with F-35 pilot training eventually taking place in Japan, he said.

Many of the first F-35 pilots are transitioning from other aircraft such as Harriers, F-16s or F-18s. However, the Marine Corps and Air Force recently began sending pilots to train on the aircraft immediately after flight school, Schnaible said.

While the pilots are honing their skills, Japanese aircraft mechanics will head to Eglin Air Force Base, Fla., to learn how to keep the F-35s in the air.

Another 40 F-35As are in production for South Korea, with delivery scheduled from 2018. They will be based at Cheongju Air Base, south of Seoul.

The F-35 has received plenty of bad press because of technical glitches and cost overruns. However, Schnaible said many of those challenges have been overcome, and the project is building up steam.

Lockheed Martin’s F-35 website says 43 aircraft will be produced at Fort Worth this year with output set to triple by 2019.

“The Marines have reached initial operational capability, and the Air Force will reach that later this year,” Schnaible said.

Initial operational capability means that a unit has enough aircraft, weapons and trained personnel to deploy in a contingency.

Schnaible noted the Marine Corps is preparing for an F-35 deployment to Marine Corps Air Station Iwakuni next year.

“They have done sea trials landing on carriers and [amphibious assault ships],” he said. “They will be demonstrating the ability to deploy when they come to Japan.”

The Air Force will base its F-35As at Eilson Air Force Base, Alaska, which puts them close to potential hotspots in the western Pacific.

“Look around at who threatens our partners in the region,” said Schnaible. “Having that deterrent capability to respond to things in a non-permissive environment is important to allies.”

Brad Glosserman, executive director of the Pacific Forum think tank in Hawaii, said the F-35 is the sort of weapon the U.S. and its allies would want to have in a fight, but added, “I don’t think decision-makers in Beijing are looking at it and adjusting their behavior.”

Glosserman doubts the aircraft’s deployment would, on its own, make much difference to security in the Far East.

“Potential adversaries will take cues from the way that the U.S. responds to provocations from North Korea or indications of American intent in the South China Sea,” he said.