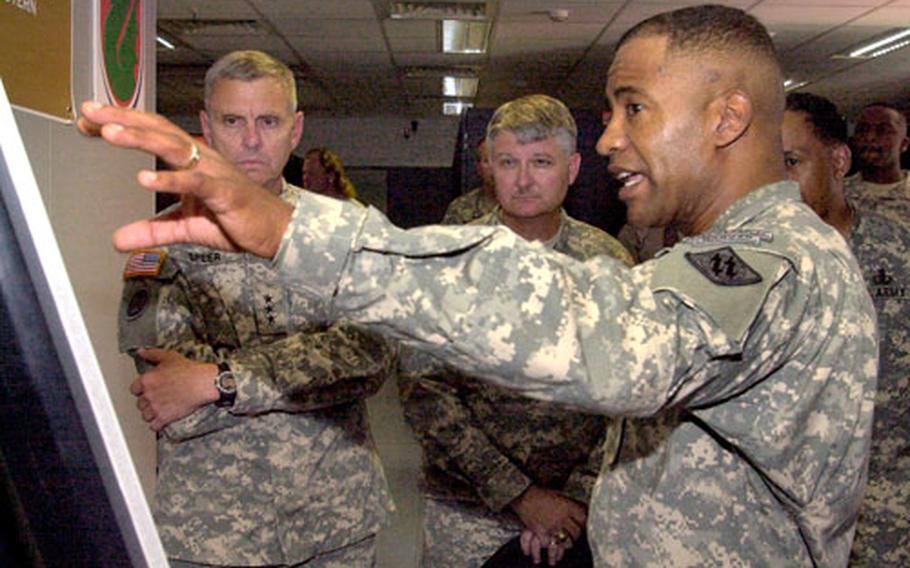 KAISERSLAUTERN, Germany &#8212; The Army on Wednesday officially christened a first-of-its-kind computer network facility commanders believe will be the model for the rest of the service.

The 7th Army Area Processing Center Kaiserslautern will be one of four computer network hubs in Europe. They are designed to make such things as e-mail faster, more efficient and secure.

The other locations are in Grafenw&#246;hr, Belgium and Italy. The Kaiserslautern center, located in a former warehouse on a small base just outside of the city, will be the largest and serve nearly 40,000 users.

Col. Robert Ferrell, commander of the 2nd Signal Brigade in Mannheim, said the new centers would consolidate servers from bases and commands spread across the European region. That means instead of each base or unit having to fund and maintain its own servers, it will use a bank of servers at the four hubs as customers.

The new network facilities will allow computer users to send and receive immensely larger amounts of information due to the upgrades, Ferrell said.

The Army could not provide cost figures of the program, but the centers are expected to make communications more efficient because they are centralized.

Technology and the ability to centrally locate servers with a much larger capacity than ever before has made the move possible, commanders said.

The Army is looking at creating similar processing centers in the States, but the Kaiserslautern center is the first in the service. The new center will have about 10 people maintaining and overseeing the stacks of servers in the air-conditioned warehouse.

The main processing center also will have a &#8220;help desk&#8221; where staff members will be available to troubleshoot network problems with users across the region.

While staff members at the hubs will be able to solve network problems, small teams at bases across the continent will be able to fix problems with equipment at specific bases or far-flung commands.