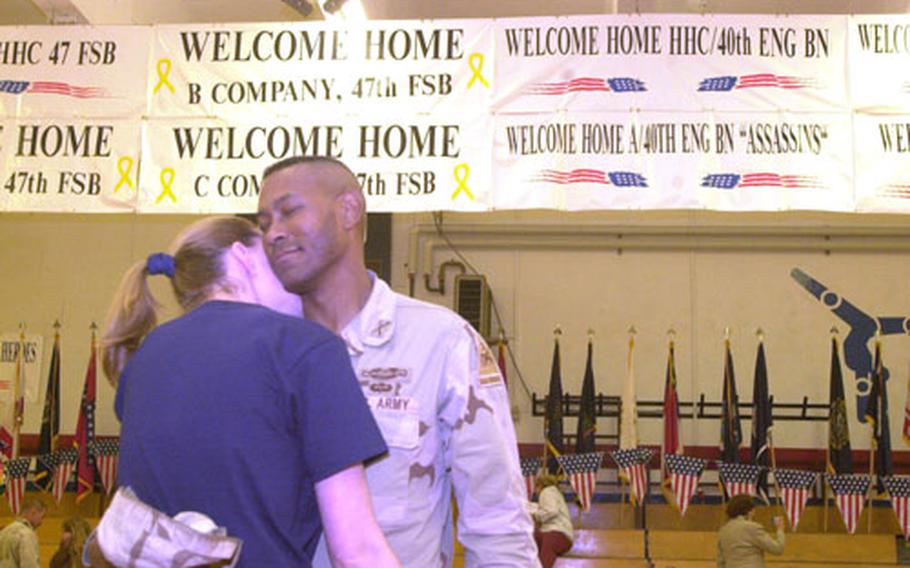 Walter and Eden Dunn kissed. Then they danced.

Wordlessly, gracefully, blissfully, they danced an impromptu slow dance while other families reunited around them.

Lost in each other, they kept dancing until nearly everyone else had left.

Dunn was one of 85 soldiers and officers in the 1st AD&#8217;s advanced party who arrived at Baumholder, 2nd Brigade headquarters, early Sunday morning.

Another 20 or so people arrived at the division headquarters in Wiesbaden. They are the vanguard for more than 13,000 1st AD troops on their way home to U.S. bases in Germany from Iraq.

The war has been brutal for Baumholder. The division was scheduled to return starting in April, and many Baumholder-based soldiers did &#8212; only to go back to war. The division got a 90-day extension after a spike in violence across Iraq in the run-up to the June 30 transfer of power.

On one day alone, April 29, eight soldiers were killed and four wounded by a car bomb in Baghdad.

The second homecoming was close to perfection &#8212; overdue or not &#8212; when it came. At precisely 12:30 a.m., a few hours after their C-17 landed at Rhein-Main Air Base, soldiers and officers marched into Baumholder&#8217;s flag-bedecked gym, filled with friends, banners, balloons, bouquets and welcome-home signs.

After a brief prayer, an even more-to-the-point welcoming speech by Capt. Jonathan Cornett, the 2nd Brigade rear detachment commander, and the playing of the national anthem and the official Army song, the soldiers were really home.

Being safe in Germany and out of the unrelenting heat and danger of Iraq is &#8220;like starting your life again,&#8221; said Spc. John Seawell, 21, with Headquarters, Headquarters Company of the 2nd Brigade.

Sunday morning&#8217;s return was the second for some families waiting in Baumholder&#8217;s Hall of Champions gymnasium.

At Baumholder, there are a lot of women in the same situation. Though Eden Dunn hadn&#8217;t seen her husband in 15 months, she considers herself almost fortunate compared to wives in the 2nd Battalion, 6th Infantry Brigade, most of whose husbands came home, then went back.

The advance party&#8217;s return was a community event, with many of the 100-plus on hand there to welcome home soldiers and officers who are not their own.

Some soldiers, such as Staff Sgt. Ronald James, of the 47th Forward Support Battalion, drew a crowd. Waiting for him was his wife, Nishonda, sons Ronald Jr., 17, and Rishard, 14, as well as April Speight and her daughters Kasjah, 3, and Kiyah, 1.

&#8220;He&#8217;s loved!&#8221; is how April Speight explained why she was there for Ronald James though her husband, Capt Kenneth Speight, is still down range.

Tina Olson was one of three sergeant majors&#8217; wives who will have to wait a little longer to welcome husbands home. But even after her husband, Sgt. Maj. Brian Olson of the 2-6, returns, she&#8217;ll be there every time another group comes back to Baumholder, she said.

If the night was close to perfect, the knowledge that so many 1st AD troops are in harm&#8217;s way was still on many minds.