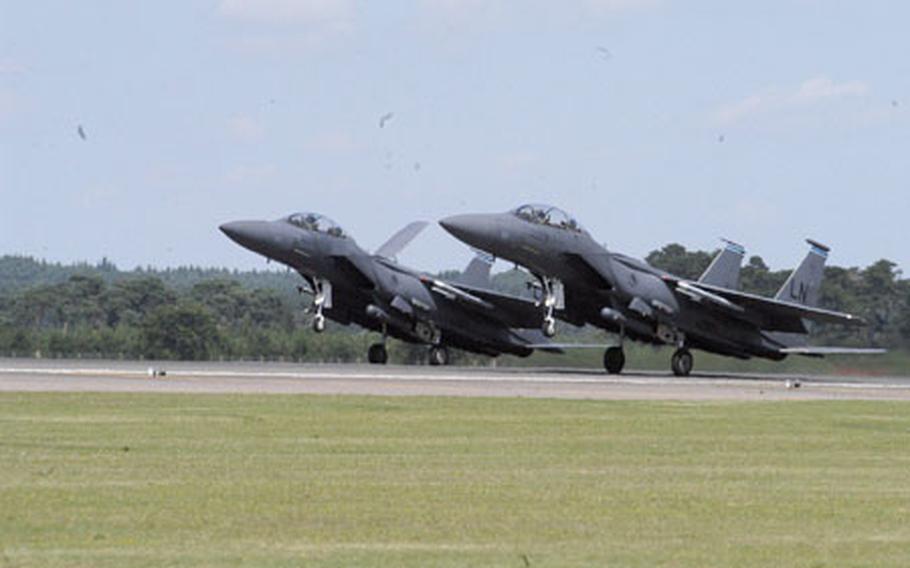 In this undated photo, two F-15s from the 492nd Fighter Squadron land at RAF Lakenheath. The squadron deployed last week to Afghanistan, the first time fighters from Lakenheath have served in that country. (Photo Courtesy U.S. Air Force)

RAF LAKENHEATH &#8212; The 492nd Fighter Squadron from RAF Lakenheath made unit history last week when it became the first air arm of the England-based 48th Fighter Wing to deploy to Afghanistan.

The unit is the first full complement of F-15 fighter jets to go to the country since war there started more than five years ago, and includes its largest single deployment of Lakenheath jets to any destination in the region, base spokeswoman Staff Sgt. Vanessa Young said.

Officials at the base would not say exactly how many jets it sent to the country or where, but a normal deployment of F-15s from the wing involves about 10 of the fighters, Young said.

The first-of-its-kind deployment is part of an Air Expeditionary Force rotation involving more than 800 airmen from Lakenheath, many who headed to Afghanistan in support of the fighters. Others will be dispersed to various other bases in the region as needed, Young said.

In earlier AEF rotations, the wing deployed many of its jets to nations in the Persian Gulf area to support war operations from that region.

The deployment is scheduled as a regular four-month rotation, Young said.