First lady stops at Aviano on her way to Olympics 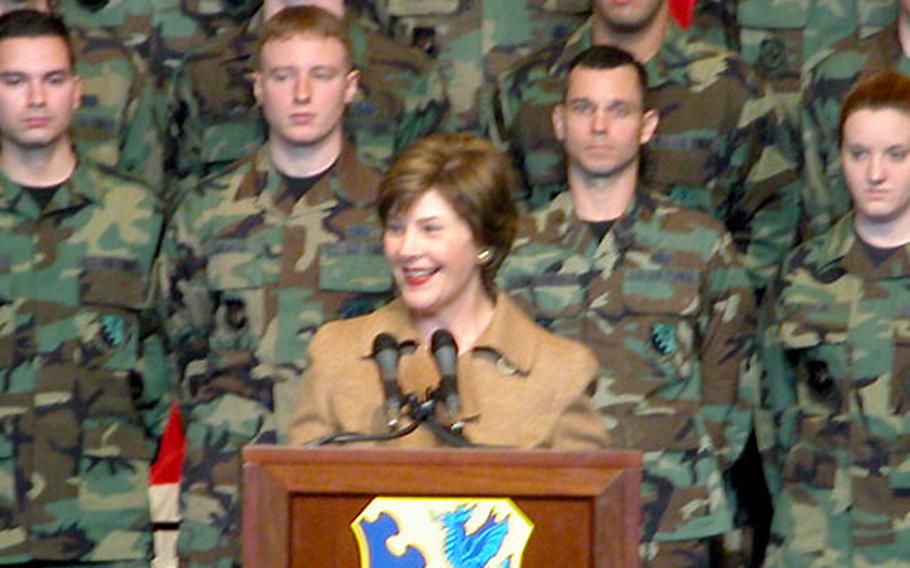 AVIANO, Italy &#8212; With a security entourage, one of her daughters and a handful of former Olympians in tow, first lady Laura Bush made a brief stop at Aviano Air Base on Friday morning to thank troops and families for their service.

Bush spoke to about 1,100 military personnel and family members for 15 minutes in a base hangar before heading to Turin for the start of the 2006 Winter Olympics. She is leading the U.S. presidential delegation for the Games and was scheduled to attend Friday night&#8217;s opening ceremonies.

After raucous applause eclipsed only by the introduction of former football legend and Olympian Herschel Walker, Bush spent her brief time praising the airmen and soldiers in the audience.

During her speech, Laura Bush thanked Italy for its support of American efforts and offered the recurring theme favored by politicians in speeches given to military audiences throughout the world: The world&#8217;s landscape has changed since Sept. 11, 2001. The ongoing wars in Afghanistan and Iraq, she said, are essential to liberate nations of people and stop the spread of those who &#8220;hate freedom.&#8221;

But Americans also have spread kindness and generosity through the efforts of military personnel who aided relief efforts after the 2004 Asian tsunami and last year&#8217;s earthquake in Pakistan, Bush said.

She thanked military members and their families for hanging in there during a tumultuous few years, when deployments have lasted longer than expected and those who signed up in peacetime were suddenly thrust into combat.

Bush&#8217;s brief speech, which began shortly after 10 a.m., came after some waiting by the audience. As early as 7 a.m., attendees were lined up outside the hangar for security checks as Secret Service members mulled about. After the speech, the crowd was not able to leave until Bush and her entourage had left the hangar.

Army Capt. Elizabeth Anderson, brought in from nearby Vicenza Army base to greet the first lady, said before the speech that she was excited to meet Bush.