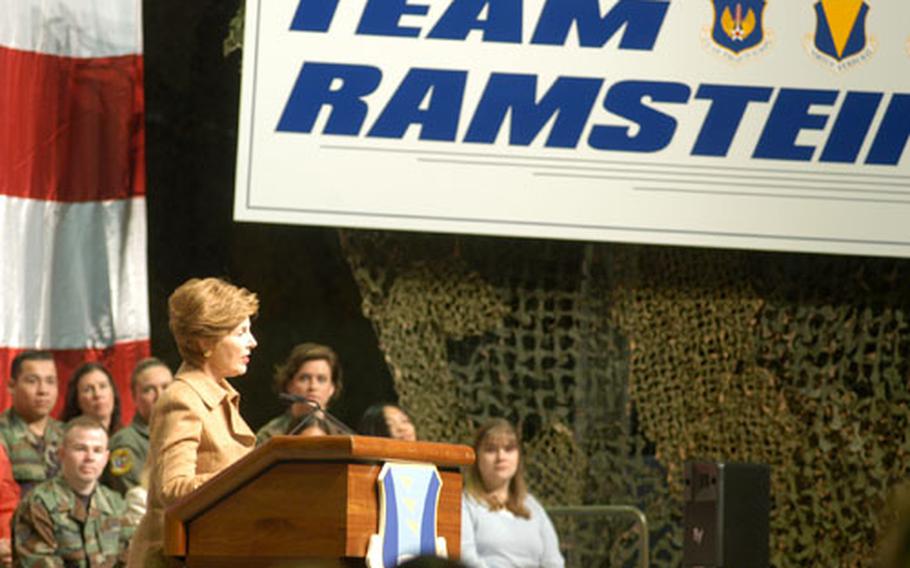 RAMSTEIN AIR BASE, Germany &#8212; First lady Laura Bush thanked servicemembers and families who &#8220;serve without a paycheck,&#8221; during her first visit to Ramstein Air Base on Tuesday morning.

Calling the Kaiserslautern military community a &#8220;testament to the partnership&#8221; between Germany and the United States, Bush told the crowd of about 1,500 people that troops are delivering freedom across the globe.

&#8220;Each of you has a greater impact than you can ever imagine on people that you will only know for a brief time,&#8221; Bush said from a stage set up inside an Air Force hangar. &#8220;And all of you are delivering the greatest gift they&#8217;ll ever receive by sacrificing your own comfort, your own safety and your own lives.&#8221;

About 30 handpicked spouses of men and women who were deployed to, or had recently returned from, Iraq sat in chairs in front of Bush as she spoke. Others sat beside uniformed soldiers on stage behind the first lady.

&#8220;I know a little bit about having your life turned upside down because the person you love wants to serve the country he loves.&#8221;

The first lady is accompanying President Bush on his four-day tour of Europe. After her stop in Ramstein, she traveled to Wiesbaden to meet with Department of Defense Dependents Schools teachers, students and their parents.

Before giving her speech at Ramstein, she visited about 20 injured servicemembers at Landstuhl Regional Medical Center who were wounded in combat in Iraq, hospital spokeswoman Marie Shaw said. Media access was limited to NBC cameras, Shaw said.

After the speech, Bush ate a roast beef lunch at Ramstein&#8217;s General Cannon Hotel with a group of military spouses.

Still, Shipman and the squadron&#8217;s other key spouse, Lynda Davis, said they had hoped Bush would address ways the government would ease the child-care problems that military families face. Davis said she had difficulty finding summer and after-school programs for her 13-year-old daughter.

Maj. Kathy McKaig, a nurse in the 328th Combat Support Hospital Reserve unit out of Salt Lake City, said she had hoped to meet Bush at Landstuhl, where the first lady was scheduled to meet with the family of one of her patients. But McKaig had the day off, so she went to Ramstein to meet Bush.

At the end of the event, McKaig posed for a picture with Bush and then fumbled through her purse for something for the first lady to sign.

A transcript of Laura Bush&#8217;s speech is available at: www.whitehouse.gov/firstlady.