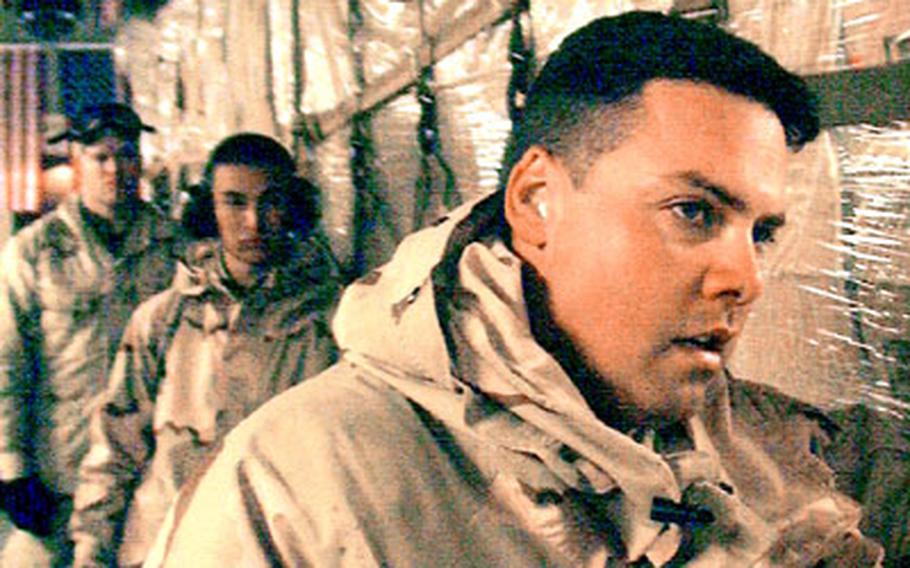 Air Force officials at Bashur airfield readily admit the humanitarian need is more acute in the central and southern regions of Iraq, but they say that doesn&#8217;t minimize the distress of some people in the north.

By next week, the Air Force may start flying aid directly into Irbil and Kirkuk as operations at Bashur airfield begin to wind down.

&#8220;I&#8217;m glad this war is almost over and that we can start to bring some relief to the people of this region,&#8221; said Staff Sgt. Hector Nieves, an aerial porter who helped unload the first shipment.

On Wednesday night, during a break in a daylong rainstorm that bent poles and overturned tents, a C-17 transport plane landed with 102,000 pounds of humanitarian daily rations.

Earlier in the day, before sunrise, two cargo planes stocked with food and medical aid had to abort their landings due to the developing storm.

The foodstuff that arrived late Wednesday was earmarked for Kirkuk, based on packing documents affixed to the 10 pallets that were unloaded by members of the 86th Air Mobility Squadron.

The U.S. Army&#8217;s 173rd Airborne Brigade out of Vicenza, Italy, which is in Kirkuk, is expected to facilitate distribution of the aid. &#8220;We presume the 173rd will transport the rations down to Kirkuk,&#8221; said Lt. Col. John Laub, deputy commander of the 86th Expeditionary Contingency Response Group.

The aid that will flow through Bashur and destinations to the south marks a turning point in the U.S.-led war in Iraq.

The coalition intends, &#8220;in a short matter of time, to launch the postconflict phase,&#8221; said Col. Steve Weart, commander of the expeditionary group.

That phase centers on the restoration and reconstruction of Iraq.

A team headed by Jay Garner, a retired U.S. Army general, was due to arrive in Baghdad this week to assume civil control of the country and clear the way for an interim Iraqi government.

In a few days, he added, there should be &#8220;an increase of humanitarian aid, medical supplies and materials to aid in the restoration.&#8221;