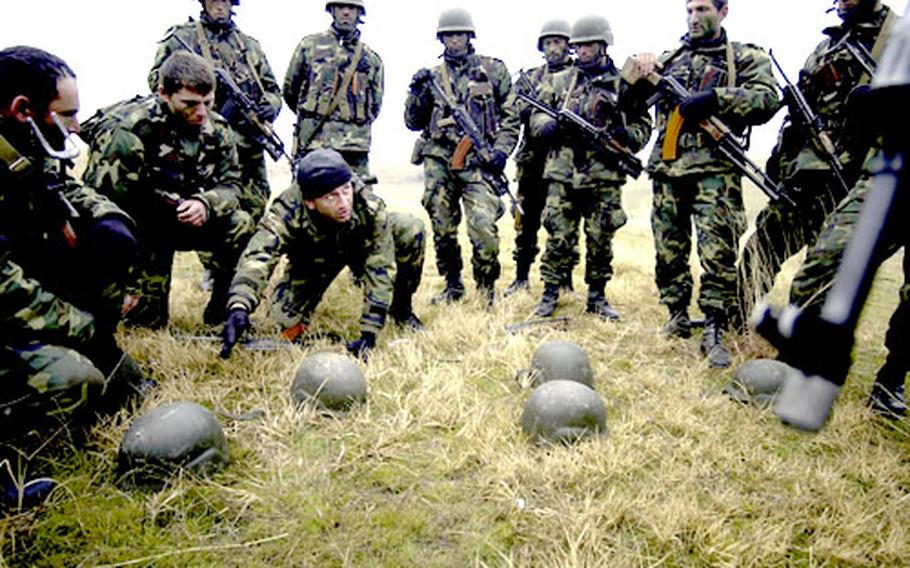 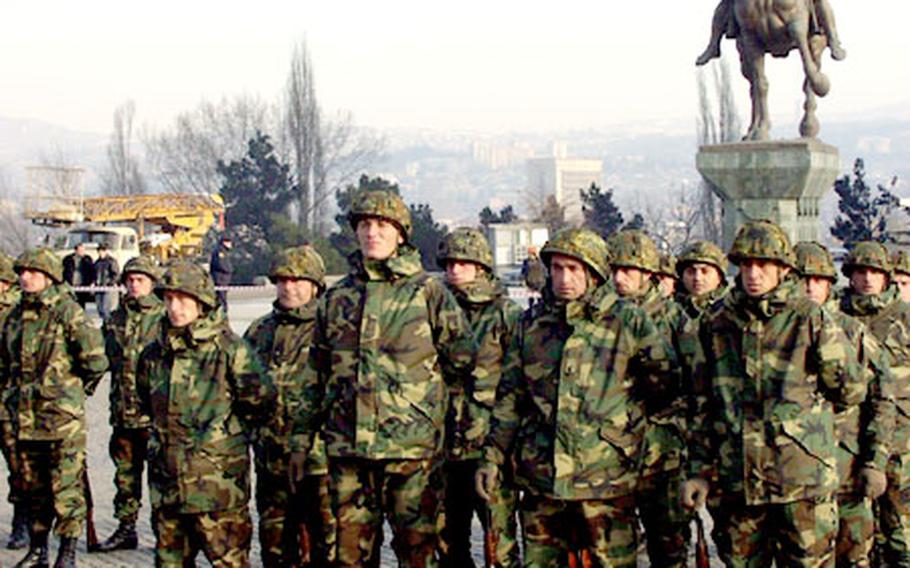 Some of the 400 Georgian soldiers that completed commando training as part of the U.S. European Command’s Georgia Train and Equip Program wait Sunday for a review before U.S. and Georgian military and government officials. (David Josar / S&S) Green Beret trainers and other U.S. military personnel who have worked on Georgia Train and Equip watch as the 400 recently trained Georgian commandos demonstrate their marching prowess in Republican Square. (David Josar / S&S)

One hundred days earlier most of these men had never fired a rifle, lobbed a grenade, worn a military uniform or obeyed an order.

But last week they ran through a precision live-fire exercise on the battalion level.

&#8220;I am so proud of what they&#8217;ve accomplished,&#8221; said Williams, a 29-year-old Green Beret and officer in charge of tactical training for the latest phase of the Georgia Train and Equip Program.

On Saturday, the first soldiers graduated from the U.S. European Command&#8217;s GTEP. The soldiers, the first of four groups to complete the training, will form a commando battalion, which the United States hopes the Republic of Georgia will use to battle terrorism.

The U.S. Department of Defense has budgeted about $64 million for the program that will continue training Georgia recruits through May 2004.

The United States will provide instructors and equipment &#8212; like light arms, ammunition, vehicles and basic gear &#8212; and build a training facility.

EUCOM designated Special Operations Command Europe to run the program. SOCEUR, working with personnel from other commands, sent troops, mostly from the 10th Special Forces Group, to Georgia in April.

In the first phase, SOCEUR trained about 200 staffers from the Georgian Ministry of Defense, border guards and other security forces on staff organization and procedures, planning and property accountability. That training was completed during the summer.

The work that was completed last week will form the cornerstone of what the United States hopes to accomplish. Hopes for its success rest with young Georgians like Tsirekidze Koba and Miladze Besik, who just completed their training.

Kobe, who previously served in the Georgian military, quickly found himself &#8220;promoted&#8221; to sergeant by his Special Forces trainers.

Kobe and Besik, 21, said the training was intense [they worked six days a week] and difficult. And they are proud of the end result.

Whether they are actually ready depends on who is asked.

The first group of soldier graduates had essentially gone through only a Georgian-conducted physical fitness regime and an introduction to military basics, such as obeying orders, followed by 100 days of field training by Green Berets.

Still Williams, the Green Beret captain in charge of the technical training for the last few months, said the Georgians and the Green Berets agree the commandos need more instruction before they are battle ready.

The Georgia military has about 20,000 people; the country&#8217;s civilian population numbers about 5 million. All able-bodied Georgian men must serve 18 months in the military unless they are college-educated; they serve just a year.

In February, GTEP will begin training a mountain battalion, followed by two sessions of training light infantry battalions and concluding in 2004 with a mechanized armor company.

The young Georgians were enthusiastic and good learners, said Williams, although the trainers didn&#8217;t know Georgian and had to rely on translators.

The Georgians worked hard and wanted more and more instruction, Williams said, and they kept their equipment in immaculate condition.

But there also is a commitment to building a military that works, Jones said.

One reason for the enthusiasm is that the recruits, by Georgian standards, are well paid. The per capita income in Georgia is about $700 a year.

Competition was keen for the slots offered by the Americans. Of about 900 applicants who went through a two-week tryout, less than half were accepted to become commandos.

The training is being conducted at an old, remodeled former Soviet military facility. Brown & Root Services has beefed up the facility and provided infrastructure improvements. The same facility will be used for a base-camp for all subsequent training phases. At the end of the training, the base and its improvements will be turned over to the Georgians, said SOCEUR spokeswoman Air Force Lt. Col. M.J. Jadick.

Seeming out of place at a U.S.-led training operation were the stacks of AK-47s the soldiers are using that were given to them by the United States.

Jadick said the Russian-style weapons and other equipment were issued instead of the American equivalent because of parts availability and interoperability with weapons the Georgian military already had.

Although U.S. officials only say GTEP is a training opportunity in the context of the U.S.-led war on terrorism, Georgian officials are hoping it will prove to be much more.

Tevzadze said he doesn&#8217;t know what will happen after GTEP concludes in 2004 but he wants the relationship to grow and hopes the United States will provide more substantial material assistance in the future.

Although Georgia Train and Equip was greeted by enthusiasm by the Georgian government and its citizens, it has been looked at with trepidation by Russia, which shares a border with the former Soviet Union state.

Russia has criticized Georgia and accused it of not doing enough to ferret out pockets of &#8220;terrorists&#8221; suspected of supporting Chechen rebels and extremists, who are believed to have ties with al-Qaida.

Russia claims the rebels are allowed to hide in Georgia but the country does little to capture them.

Georgia&#8217;s Minister of Defense, Lt. Gen. David Tevzadze, dismissed Russian criticism that the isolated portions of his country are hiding grounds for the Chechen rebels, who recently took patrons hostage in a Moscow theater, resulting in fatalities.

In addition to fighting terrorism, the United States has an interest in the stability of Georgia, primarily due to its oil fields, an oil pipeline that runs through the country and the fact that several U.S. oil companies want to ensure they have the opportunity to access and refine the oil.