First flight carrying U.S. families out of Japan expected to leave Yokota Air Base on Saturday 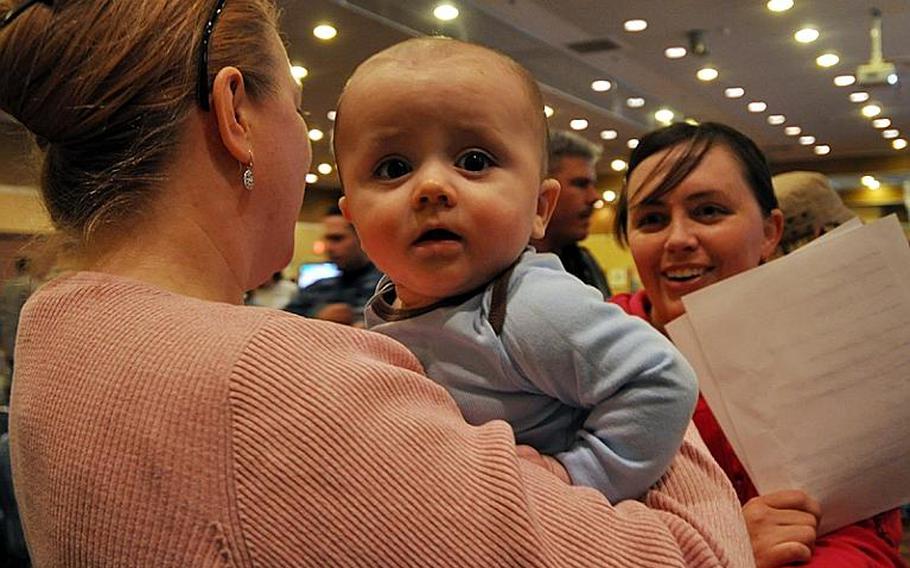 Buy Photo
Ronin Barber, six months, waits his turn in a pre-processing line Saturday at Misawa Air Base, Japan, for family members wishing to leave Japan under a 'voluntary departure' program following a devastating earthquake and tsunamis that hit Japan on March 11. Ronin is being held by family friend Christy Starns, as his mom, Rachel, talks in the background. (T.D. Flack/Stars and Stripes) 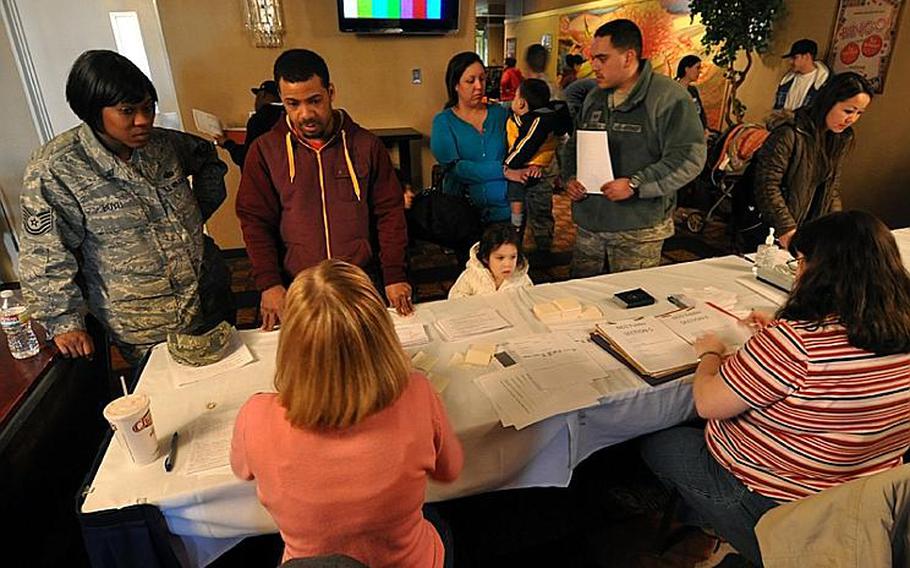 Buy Photo
Community members on Saturday visit the first station of the pre-processing line at Misawa Air Base, Japan, for family members wishing to leave Japan under a voluntary departure program following a devastating earthquake and tsunamis that hit Japan on March 11. (T.D. Flack/Stars and Stripes) 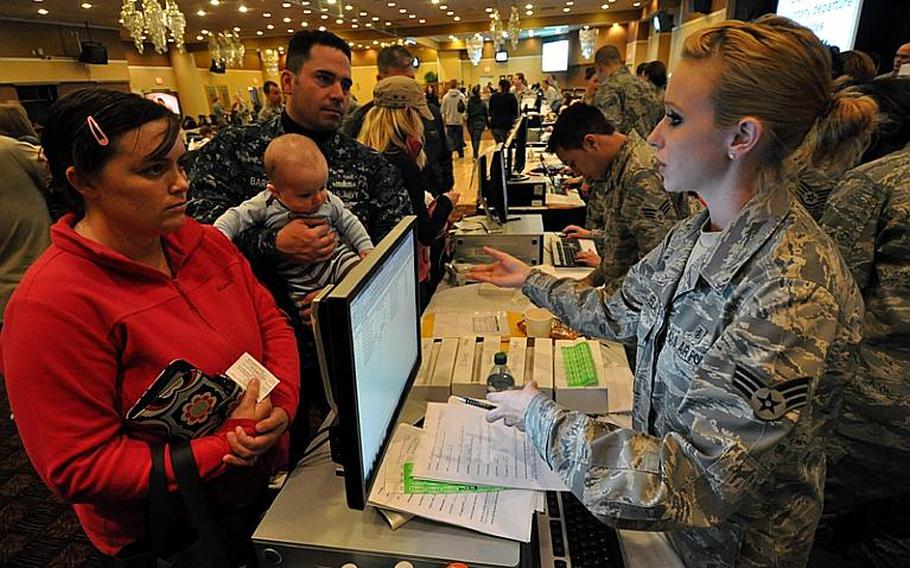 TOKYO &mdash;The first flight carrying U.S. military family members out of Japan was expected to leave Yokota Air Base around 5 p.m. Saturday, and two hours before the flight, there were still seats available.

Only 190 of the 230 seats had been taken as of 3 p.m., although base officials say they expect the plane to be full booked by the time it departs.

The planes being used to fly family members out of Japan to the States will be commercial aircraft being contracted the U.S. military, base officals said.

Last night, base officials contacted representatives from each unit, looking for names of people who wanted to leave right away. Pregnant women and people with medical conditions were being given top priority. But so far, Yokota officials say they haven&rsquo;t had to use the priority list.

Every person who wanted to leave on Saturday will be able to leave, they said. As of 3 p.m. Saturday, 556 people at Yokota has signed up for the flights, according to the base public affairs office. There are expected to be 11 flights between now and March 27 out of Yokota.

The Defense Department announced the &ldquo;voluntary departure&rdquo; program on Thursday, after fears rose of a radiation leak at the Fukushim Dai-ichi nuclear plant, about 130 miles north of Tokyo. The plant&rsquo;s power supply was knocked offline Friday following the 9.0 earthquake and subsequent tsunamis hit the region. Since that time, there have been numerous explosions and workers have been trying desperately to keep the nuclear fuel rods cool.

At two others bases in Japan, people wishing to leave under the voluntary departure program were in a holding pattern.

At Misawa Air Base in northern Japan, base residents packed the base club, winding through a series of processing stations to register for flights.

Like Yokota, pregnant women and those with urgent medical issues were allowed to process first. They were followed by families with children 24 months and under.

Base officials couldn&rsquo;t say by 2 p.m. Saturday how many family members they think will take advantage of the flights out of Misawa. They were also still coordinating flights, and were unable to predict when the first planes carrying families would depart.

Staff Sgt. Darnell Gordon sat in a waiting area, feeding a bottle to his 3-week-old daughter, while his other daughters, 5 and 4, sat nearby.

Gordon said that the fear of supply shortages, the nuclear issue in Fukushima, and a heavy work schedule all played a part in helping him and his wife decide that the family should head back to the United States.

Loriel Hernandez sat on another chair nearby, feeding her infant son a bottle.

She said she was taking her son and 5-year-old daughter back to South Carolina, &ldquo;just for safety reasons.&rdquo;

&ldquo;There&rsquo;s no reason to stay,&rdquo; she said. &ldquo;I&rsquo;m afraid of running out of formula and supplies.&rdquo;

The Department of Defense Dependents Schools&rsquo; desk was especially busy, with families seeking school records. Parents with kids in elementary school will receive a letter they should provide if they try to place their children in a school in the United States. Junior high and high school students&rsquo; records were brought to the club and will be provided to parents.

The final step in the process was to receive a colored wrist band with an assigned passenger number for tracking purposes. Family members were told that they would be contacted when the flights were finally planned. The information will be broadcast on AFN radio and television, over the base loudspeaker system, and on various base social media networking sites.

At Naval Air Facility Atsugi, near Tokyo, officials began mustering families with pregnant women, infants and special needs at the base movie theater around 9:30 a.m., only to cancel the muster shortly afterward. Dozens of families had already reported to the theater with their luggage and pets. Officials issued a statement apologizing for the inconvenience, stating that things are very fluid right now.

Base officials were meeting Saturday afternoon to discuss departure times for the first flights.

Earlier Saturday, Navy officials announced that those departing Japan will not be charged for the flight.

The Defense Department will pay for voluntary evacuation flights to any of the 48 continental United States, Commander Fleet Activity Yokosuka&rsquo;s Capt. David Owen said during a broadcast message on the base commander&rsquo;s channel at 1:42 p.m. At this time, Hawaii and Alaska are excluded, he said.

Families of servicemembers and Defense Department civilians who are leaving will need TDY orders from their command, Owen said. The orders will be create d per family, not by individual.

Contractors can also use transportation, but will likely need to sign a document saying they will repay the cost of the flight.

&ldquo;You&rsquo;re probably going to have to pay for it somewhere down the road,&rdquo; Owen said.