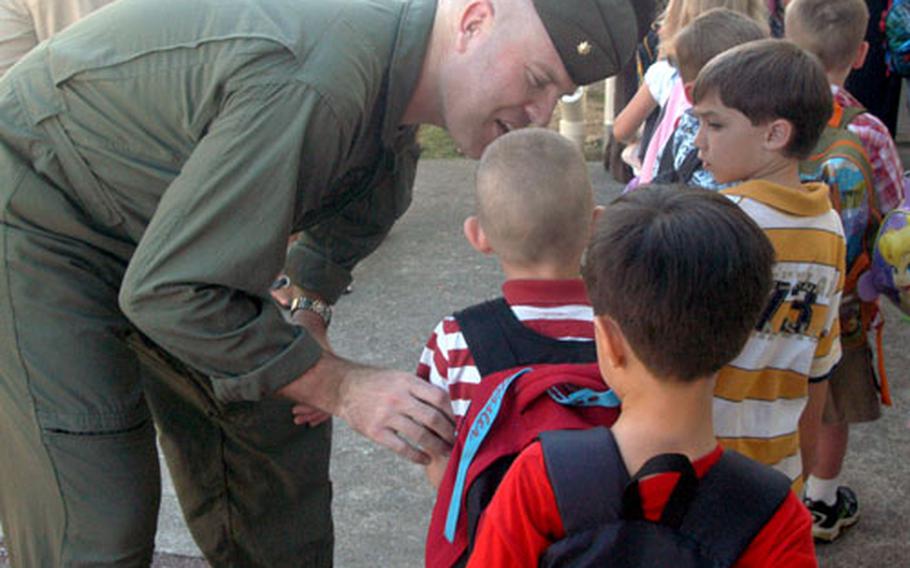 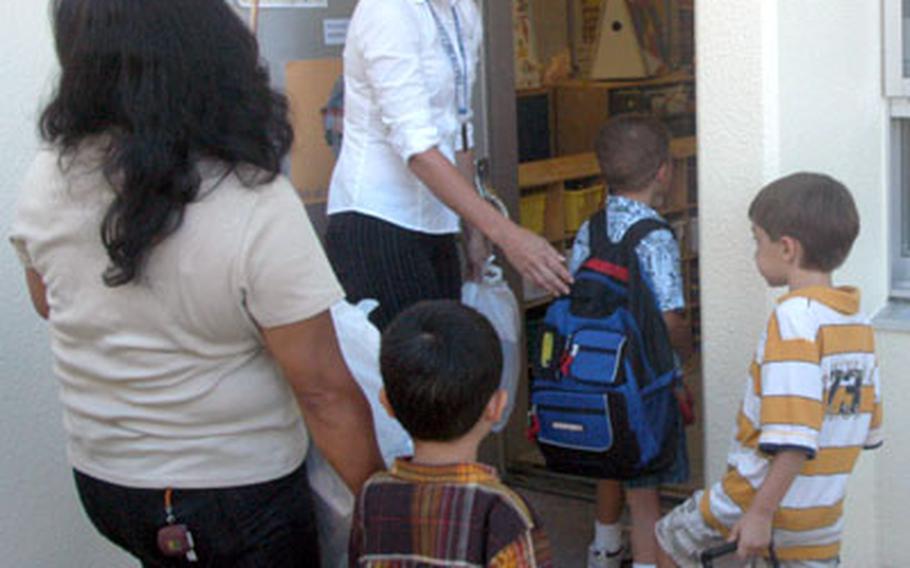 CAMP FOSTER, Okinawa &#8212; They tried to put on brave faces. Lined up in rows, some stood waving while others looked around in a daze. Others shuffled along slowly, wiping tears from their eyes.

And that was just the parents.

This week, parents at Department of Defense Dependents Schools in the Pacific said goodbye as their kids went to school for the first time.

About 1,900 kindergartners are registered in the system, with about 800 of those registered in Okinawa and about 290 in South Korea, DODDS officials said. The rest are split between mainland Japan and Guam.

Missler said his son started talking about going to school two years ago. Logan would watch his 10-year-old brother get off the bus each day with growing anticipation.

Both Misslers maintained their composure as they parted Wednesday.

Other parents, however, were not so brave.

As for the students, many were too shy to speak.

Not so in Korea for 5-year-old Isabella Martinez, who said she enjoyed the move to kindergarten.

Things she liked the first day? The playground, lunch and no homework.

Back on Okinawa, in a meeting called the Boo-hoo Breakfast at Killin after kindergarten classes started, another mother, Jackie Rodriguez, 34, laughed when she talked about her tearful goodbye and the reaction of other mothers.

Until Wednesday, Rodriguez said, she had never been away from her son, Isaiah, 5.

DODDS school administrators and teachers take steps each year to make the transition from home to school easier. Teachers visited kindergartners homes before classes began. Schools also held open-house sessions, where students could sit in the classroom and meet other children under the guidance of a nearby parent.

Jennifer Ehret, Logan&#8217;s kindergarten teacher, said the home visits are an important part of transitioning a child into school. The visits lessen a child&#8217;s fear of school, she said. Ehret spent about 20 to 30 minutes in each student&#8217;s home, coloring and talking with them.

Before entering the classroom, Taryn Harding, 4, had some advice for her mother.

T.D. Flack contributed to this report.