Najmeen Bibi, center, graduated at the top of her class at the first midwifery academy in Khowst province, Afghanistan. Names of the other women in the photo were not available. (Anita Powell / S&S)

Najmeen Bibi, center, graduated at the top of her class at the first midwifery academy in Khowst province, Afghanistan. Names of the other women in the photo were not available. (Anita Powell / S&S) 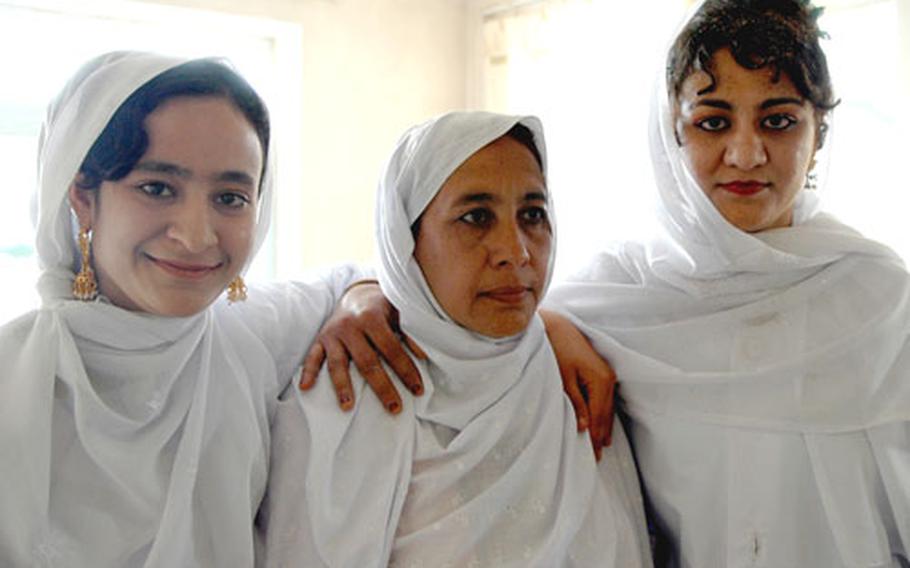 Najmeen Bibi, left, and Rooh Atza, right, will return to their village with their mother, center, and support the family through midwifery. The sisters say they hope to use their skills to help all women, but one in particular: their mother, who is a widow. (Anita Powell / S&S)

KHOWST, Afghanistan &#8212; When Rooh Atza, now 22, returned to her home from Pakistan four years ago, her dreams of becoming a physician were shattered.

But on Wednesday, she and her 19-year-old sister, Najmeen Bibi, graduated at the top of their class in Khowst&#8217;s first midwife training academy. The class of 30 women &#8212; ranging from teenage to middle-age &#8212; triumphantly celebrated the occasion, which also fell on International Women&#8217;s Day.

A slew of officials, both local and American, attended the ceremony in downtown Khowst. The 18-month midwifery course is part of a three-year, $105 million U.S. Agency for International Development program to rebuild southern Afghanistan.

The need for midwives and obstetricians is especially dire in Afghanistan, which has a sky-high fertility rate &#8212; almost seven children are born to every woman &#8212; and a 16 percent infant mortality rate, which is more than twice that of neighboring Pakistan and a staggering 25 times greater than the U.S. infant mortality rate, according to the online CIA Factbook.

Afghanistan also has a lot of catching up to do: During Taliban times, women were prohibited from working or attending school. Women also were not allowed to see male doctors, leading to a severe dearth of obstetric services and professionals.

The midwifery class, officials say, could help reverse the trend.

&#8220;This will be a historic event for the women of this province,&#8221; said Khowst governor Merajuddin Patan, in English. &#8220;This is the dawn of women participation in public life here. This will open the gate for more participation of women.&#8221;

At the ceremony Wednesday morning, local leaders &#8212; including three women, one of whom was the provincial minister of women&#8217;s affairs &#8212; spoke, along with several male leaders, both local and American.

The graduates, dressed in white lab coats and matching head scarves &#8212; there was not a burqa in sight &#8212; sat shyly in the back rows with female relatives. Many held children in their laps.

U.S. Army doctors and commanders from nearby Forward Operating Base Salerno also attended to lend their support, although the military did not participate in the midwifery program.

Col. Pat Donahue, commander of Task Force Devil, whose soldiers patrol the province, acknowledged that there is still a significant gender gap in Afghan society, but he said the midwifery program was a step forward.

American doctors also met with the midwives to offer support and information.

U.S. Ambassador to Afghanistan Ronald Neumann also flew from Kabul to Khowst to express his support and to pass out diplomas.

&#8220;As these new midwives prove, women are equally capable of making a contribution to the success of their country,&#8221; he said.

That pride is something Rooh Atza clearly bore as she stepped up to receive her diploma alongside her sister.