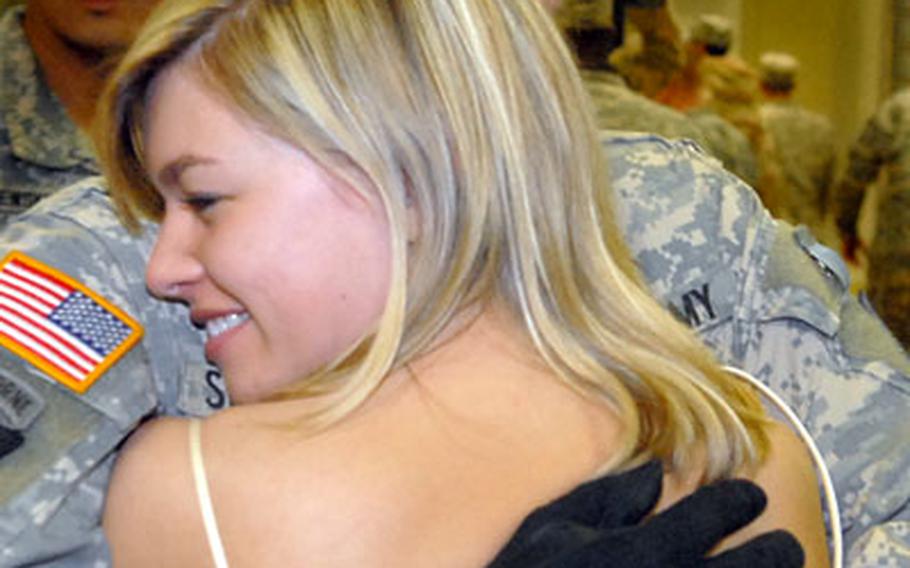 FRIEDBERG, Germany &#8212; After a week of homecomings, more than half the 1st Brigade Combat Team, 1st Armored Division is back from an extended tour in Iraq.

&#8220;Right now, nothing else matters but seeing these guys come back,&#8221; Lt. Col. Antonio J. Amos, commander of U.S. Army Garrison Giessen, said as he and a crowd of hundreds awaited the arrival of roughly 150 soldiers at the Ray Barracks gymnasium Thursday evening in Friedberg. Another 50 or so soldiers returned to Giessen at the same time.

&#8220;You can just feel the momentum of the morale,&#8221; Chaplain (Col.) Bruce M. Fredrickson said while gesturing toward the ceiling with his thumb.

By late Thursday, about 2,000 of the roughly 3,500 Ready First soldiers were out of the desert.

The homecoming event was the first of which the media were informed. Despite repeated queries, 1st AD public affairs officials were unable to let Stars and Stripes know earlier when troops arrived back in their Germany communities.

Sitting on the bleachers with her four children beside her, Letitia Levy looked serene as the last few minutes before her husband&#8217;s return drifted by. For most of the last four years, her husband, Sgt. Damion Levy, has been in Iraq &#8212; twice with the 3rd Infantry Division and once with the 2nd Battalion, 37th Armor Regiment. &#8220;It seems like he&#8217;s always gone,&#8221; she said.

She wasn&#8217;t so sure she would maintain her composure when he marched through the door.

When she did get hold of her sergeant, she didn&#8217;t cry, but the couple did lock in a long embrace. Surrounded by his children with his wife on his arm, Damion Levy was overwhelmed with feelings upon seeing his family. &#8220;Words can&#8217;t describe it,&#8221; he said with a grin.

Veronica Salas, with her 7&#189;-month-old son, Benjamin, on her knee, was eager for her husband, Sgt. Jesus Salas, to reunite with his boy.

Jesus Salas, a member of 1st Battalion, 36th Infantry Regiment, had been kept up to date on his son&#8217;s activities, thanks to compact disc recordings his wife sent him.

She went home to California to have the support of her family for Benjamin&#8217;s birth. Germany, she said, would have been a lonely place to spend her husband&#8217;s deployment because all of her friends were gone.

Her friends are back now. She was flanked on the bleachers by one, Amanda Shoupp, who also just returned from the States. While her husband, Spc. James Shoupp, was deployed, she retreated to Snowflake, Ariz., where she went to college and got a part-time job &#8220;just to keep busy,&#8221; she said. It made the time go by faster.

All but a handful of Ready First&#8217;s soldiers should be home by March 1, Amos, the garrison commander, said. A small number of troops who are ensuring the unit&#8217;s equipment returns from Kuwait will return later.