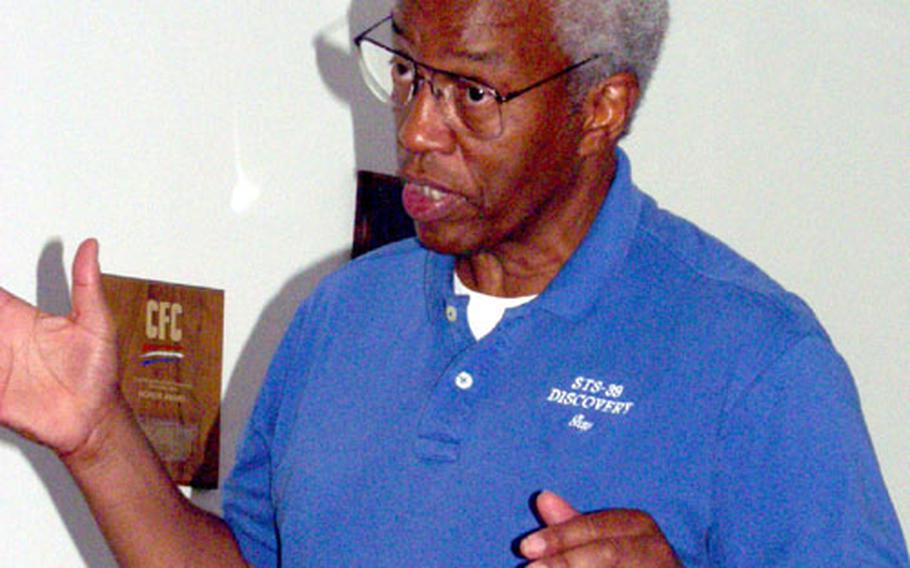 Bluford, the first black in space, has arrived in Europe, bringing his energy and expertise as part of this year&#8217;s U.S. Air Forces in Europe Extreme Summer program.

On Wednesday, Bluford gave his first of many presentations at the European Stars and Stripes in Griesheim.

Bluford&#8217;s love of flying began as a child. He attended Pennsylvania State University, where he received a bachelor of science in aerospace engineering. While at Penn State, he participated in Air Force ROTC and was later commissioned.

Upon completion of flight training, he was assigned to the 557th Fighter Squadron at Cam Ranh Bay, Vietnam, flying 144 combat missions.

Bluford became a NASA astronaut in 1979. Out of more than 8,000 original applicants, he was one of 35 applicants who made the final cut. His career that followed spanned 15 years, and during that time Bluford logged more than 688 hours in space.

He was a crewman on four missions and manned the first night-launched shuttle. One of those missions included a classified Department of Defense flight, which Bluford jokingly told the audience, &#8220;I&#8217;d be happy to tell you about this flight, but I&#8217;d have to kill you.&#8221;

Bluford&#8217;s sense of humor accompanied his informative anecdotes. He described what going from zero to 18,000 mph is like and what gravity does to an astronaut physically.

Astronauts lose 10 percent of body fluids within the first day of orbit, he said. Much of that water is retained in the face and upper extremities, while the astronaut&#8217;s thighs and calves get thinner.

Bluford also explained what astronauts do in space.

&#8220;We made new materials in space. We grew plants in space ... so we went from experiment to experiment,&#8221; Bluford explained.

That keeps astronauts very busy, Bluford said, so much so that they often maintain 12-hour shifts.

Though his last mission was in 1992, Bluford doesn&#8217;t think of himself as retired. At 61 years of age, Bluford said if NASA were to call him tomorrow about another mission, he would seriously consider it.

In the meantime, traveling as part of the Extreme Summer program has given him the opportunity to see military bases worldwide.

Bluford will be in Ramstein on Thursday and Friday and will appear Saturday at RAF Mildenhall followed by appearances in Stavanger, Norway; RAF Lakenheath, England; RAF Croughton and RAF Fairford.