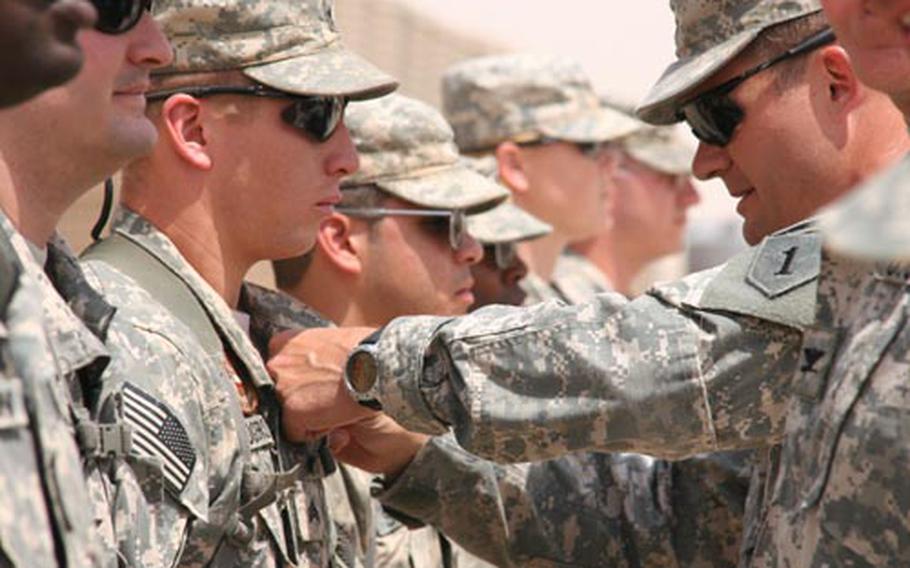 The seven soldiers, all assigned to Company C, 2nd General Support Aviation Battalion, 1st Aviation Regiment, received the awards at a ceremony on the U.S. base near Tikrit. The awards cited "actions during combat operations in northern Iraq while flying in support of Task Force Iron, 1st Armored Division."

According to Army officials in Iraq, the seven are the first in the Army to receive the award. Until this summer, the Army eligibility criteria for the award read "not to include aviation." Those words were deleted, and now aviation medical units can get the award, which is similar in prestige to the Combat Infantryman Badge.

"This is a big deal when you think about the magnitude of this because it is the first time flight medics have received the CMB. It is an interesting point in history," Col. Jessie O. Farrington, commander of the 1st Infantry Division&#8217;s Combat Aviation Brigade, was quoted as saying during the ceremony.

"When they get the call they don&#8217;t know what they are getting into. All they know is that they are going to save a soldier&#8217;s life, or any human being for that matter. These guys are truly angels of mercy."

For several years, hundreds of battle-hardened Army medics in Iraq and Afghanistan fought to be able to earn the Combat Medical Badge, the ultimate symbol of courage under fire for soldiers who do their job.

Since its creation in the dying days of World War II, the CMB has been reserved for medics serving alongside infantry troops. Army regulations excluded combat medics from aviation units, forward support battalions, military police and air and ground ambulance companies from earning the CMB, until the regulations were changed.

The soldiers receiving the award said it was a long overdue honor for those in their line of work.

"It is sort of a thankless job," Rogers was quoted as saying. "Most people think all we do is pick-up and drop-off patients and only give us credit for that. We don&#8217;t get credit for the times when we retrieve patients under fire or treat them while in flight."