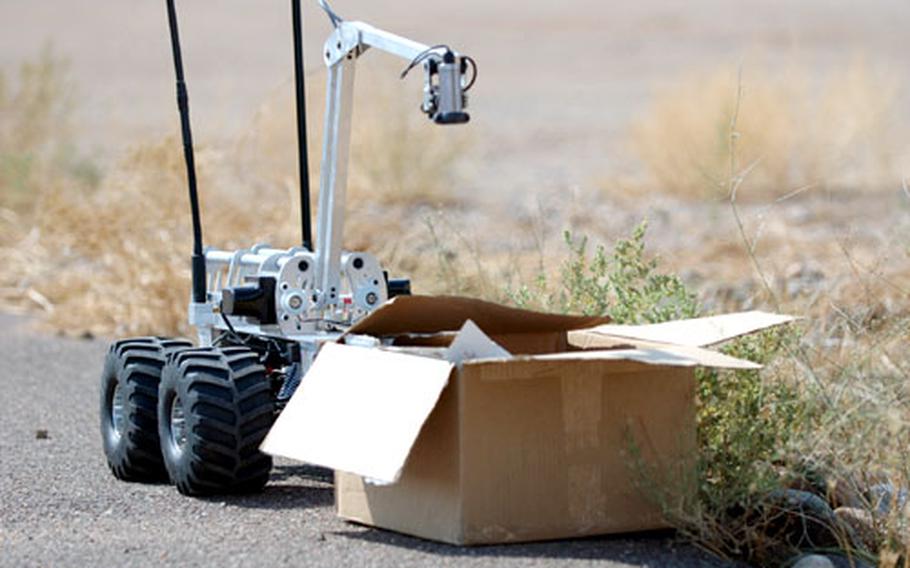 A pre-production version of the new Marcbot IV inspects a box for explosives in a manufacturer&#39;s test earlier this month. The new detectors are expected to arrive in Iraq and Afghanistan over the next three to five months. (Courtesy to S&S)

ARLINGTON, Va. &#8212; The first of 330 of the newest robots designed to help soldiers find roadside bombs from a safe distance will start rolling off the assembly line next week, said Ken Zemach, whose company designs the robots.

The new devices are expected to arrive in Iraq and Afghanistan in three to five months, said Army spokesman Lt. Col. Carl Eye.

Zemach said the MARCBOT IV has significant advantages over earlier versions, such as a much larger range and removable remote control antennae allowing U.S. troops to operate the robots from inside armored vehicles.

He said other improvements include:

A much higher resolution camera.A more rugged system to move the camera.An additional battery, allowing the robot to last longer.More power, so the robots can climb hills easier.When they were first rushed into service 14 months ago, the robots did not have the durability or range for combat, said Bill Cohen, of manufacturer Exponent, Inc.

Cohen said the Army and Exponent decided to develop the MARCBOT in the field instead of waiting until it was perfected to deploy it.

Even in small numbers and without the kinks worked out, the robots have proven to be invaluable on the battlefield, wrote 1st Sgt. Richard Acevedo in an e-mail from Baghdad.

It can take hours for explosive disposal experts to check out possible roadside bombs, Acevedo, a Guardsman with Company A, 1/69th Infantry Regiment out of New York, wrote Wednesday.

The days of using U.S. troops as &#8220;miner birds&#8221; to find roadside bombs needs to end soon, Acevedo wrote, referring to canaries in a coal mine.

One time, a MARCBOT found a roadside bomb in the dark while his men were on patrol, Acevedo wrote in an undated e-mail to Exponent.

&#8220;It could have blown up on my men and killed them. This robot kept that from happening. It also eliminates the danger of sitting out there as a target waiting for EOD to arrive. We baby the robot we have because we know it&#8217;s the only one at present. The guys won&#8217;t leave the wire without it,&#8221; Acevedo wrote.