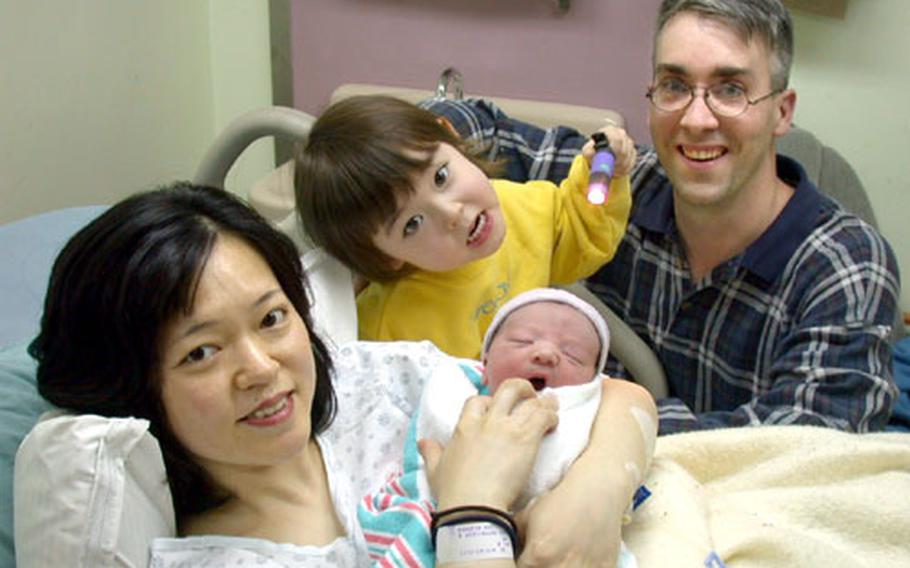 Mami Dolberry proudly holds her son Mikoto, the first baby born at an overseas U.S. military base in the Pacific in 2004, in her room and Naval Hospital Yokosuka on Friday. Father Mitchell Dolberry, of Fleet Technical Support Center, and Morgan, the baby’s 2-year-old brother, are also pictured. (Courtesy of U.S. Navy)

He just kept sleeping as everybody else admired him in his blue- and pink-striped cap, wearing his mother&#8217;s turquoise fleece jacket as a blanket.

Mikito is apparently the first baby born in 2004 in a Pacific military hospital.

He was born at 1:05 p.m. Jan. 1 after his mother, Mami, labored with him nine hours in an otherwise quiet maternity ward at the base hospital. He weighed 7 pounds, 10 ounces and measured 20.75 inches long.

In addition to his mother, he joined his father, Mitch, his big brother, Morgan, 2, who on Friday was sleeping on two chairs pulled together in the hospital room.

They said their second son&#8217;s birth was much different from their first son&#8217;s when Mitch was stationed on board the USS Vincennes. Mami went to her parents&#8217; home in Shiga-Ken to have the baby. Morgan was delivered by Caesarian section after 17 hours of labor, and it took his father six hours to get to the hospital.

But Mitch, with 13 years in the Navy, has shore duty now so he and Mami were able to go to the hospital from base housing together at 4 a.m. Thursday.

Sometime after the birth, the family had an unusual visitor: professional wrestler Bill Goldberg, who had met a hospital corpsman at Narita Airport, where he&#8217;d flown to for a Japanese New Year&#8217;s event.

Goldberg told the corpsman he&#8217;d love to tour the base, and before long, he was signing autographs for fans on the USS Kitty Hawk and visiting hospital patients.

In the United States, the first babies of the year are traditionally showered with free diapers, strollers and other largesse, the Dolberrys seemed very much on their own and said they hadn&#8217;t heard of any special gifts or baskets coming their way.

Hospital spokesman Bill Doughty said various base organizations often put together gifts for new babies, but he was unaware of anything special happening for Mikito and his family.

New babies are a common occurrence at Yokosuka&#8217;s base hospital. About 550 babies are born there each year, according to officials.