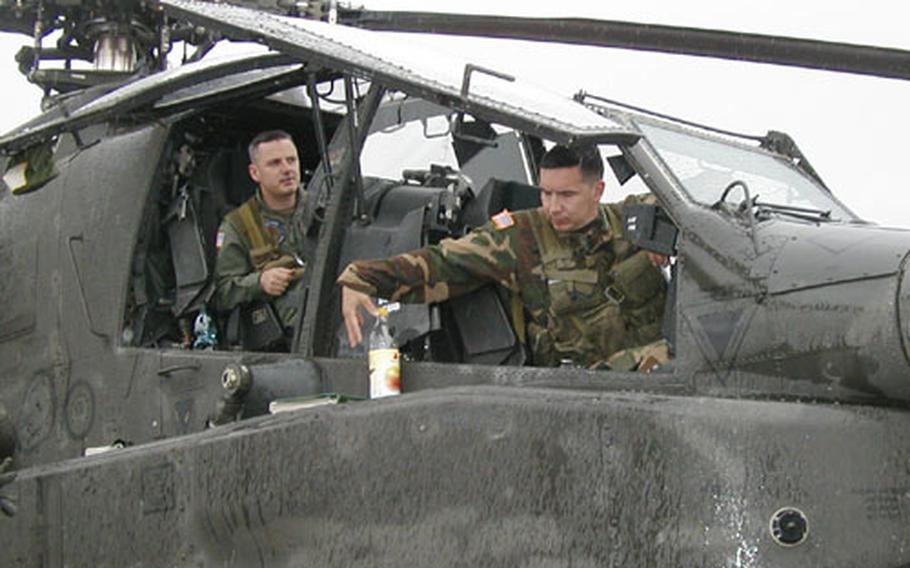 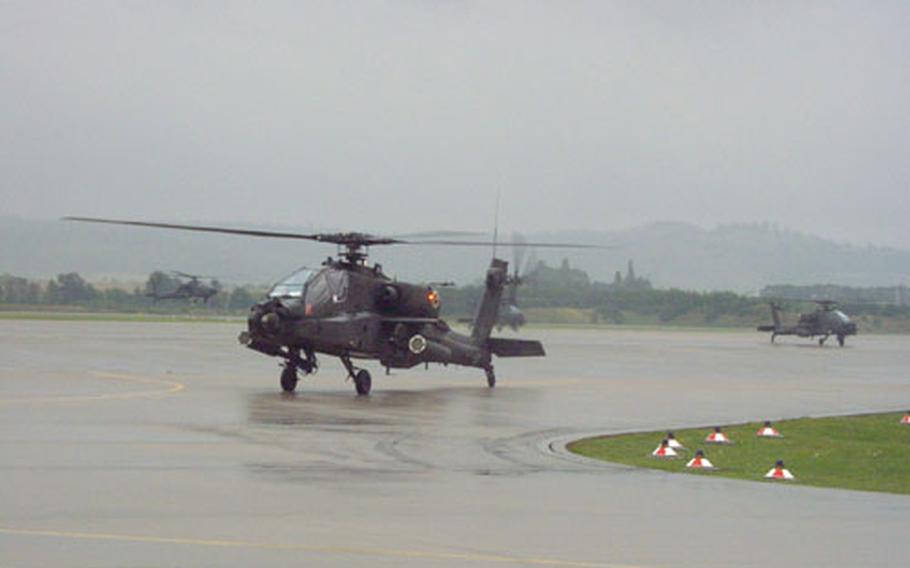 Four of the 2nd Squadron, 6th Cavalry Regiment&#39;s new AH-64D Apache Longbow helicopters taxi across a rain-soaked apron at Illesheim Army Airfield, Germany. The unit has been at Fort Hood, Texas, for the past year training on the upgraded attack helicopter. Ten of the aircraft flew into Illesheim Monday, and 14 more are scheduled to arrive over the next week. (Steve Liewer / Special to S&S) 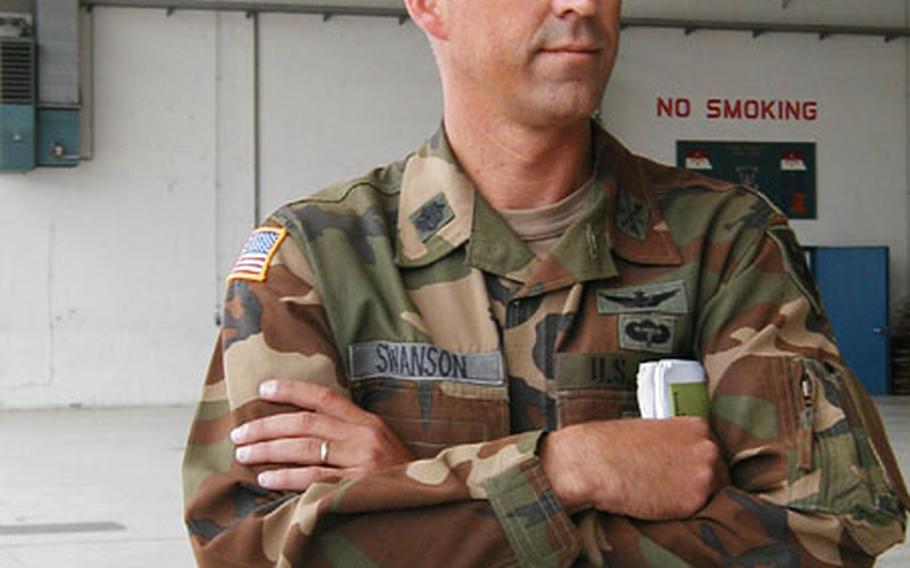 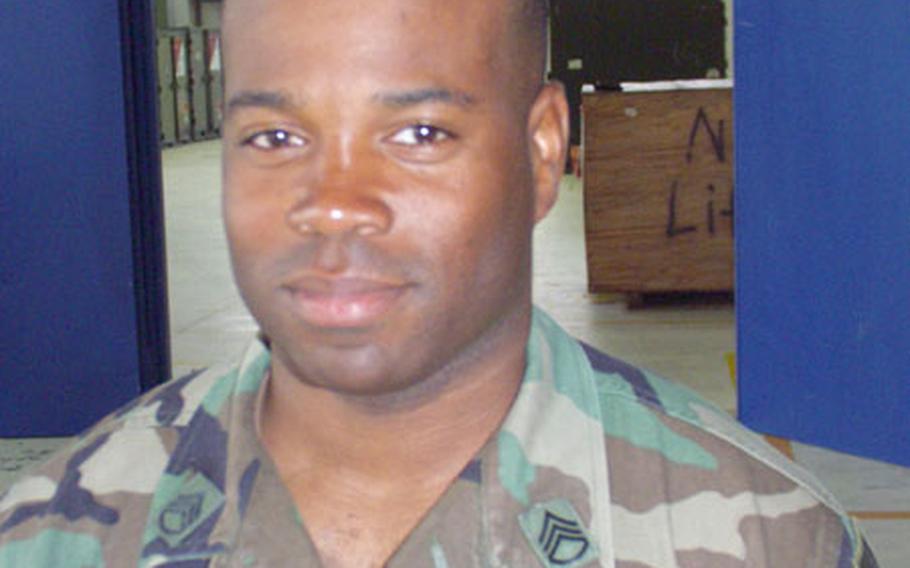 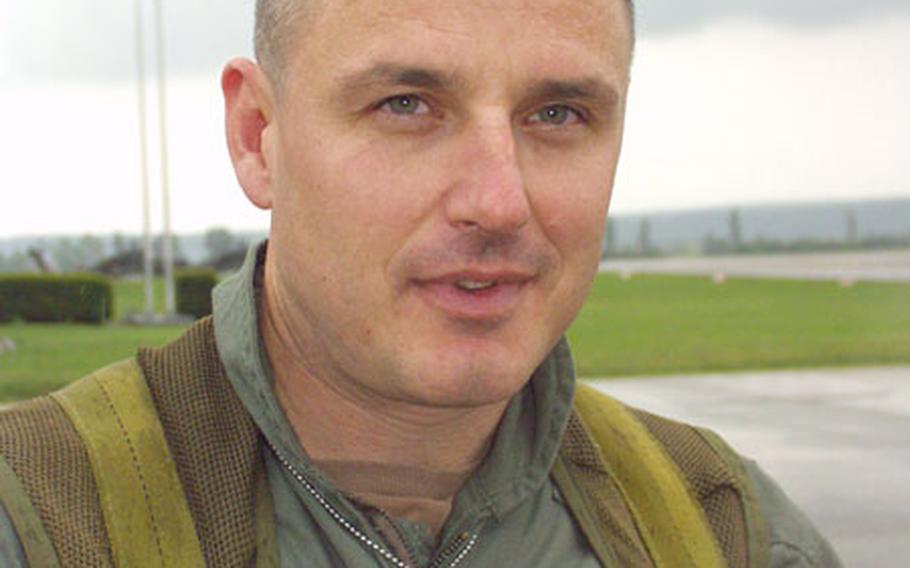 ILLESHEIM, Germany &#8212; The four helicopters buzzed through the rain-drenched skies, skirting the bottoms of low, gray clouds that had planted themselves directly over their new German home.

By late afternoon Monday, the 2nd Squadron, 6th Cavalry Regiment&#8217;s first AH-64D Apache Longbows had arrived in Illesheim after a long journey from Fort Hood in central Texas. They got a wet welcome.

In June 2003, the unit shut down its operations in Illesheim just a few weeks after returning from eight months of combat duty in Kuwait and Iraq. Its members shipped their aging Alpha-model Apaches back to the Boeing manufacturing plant in Mesa, Ariz., to be refurbished as Longbows, then scattered to other units. Many 2/6 Cavalry troopers landed back in the Middle East.

The unit, meanwhile, re-formed in Fort Hood, under the leadership of Lt. Col. Mike Swanson. A whole new group of aviators &#8212; mechanics, crew chiefs and support personnel, as well as pilots &#8212; had to learn new jobs. Only three officers and three soldiers are holdovers from the unit that fought in Iraq a year ago.

After months of classroom, flight and field exercises in Texas, the Army certified the 2/6 Cavalry as combat-ready June 18. It is the 10th of 25 Army Apache battalions to get Longbows, and the second from Illesheim.

Swanson said 178 of the 2/6 Cavalry&#8217;s troops already have made it to Illesheim with their families, and the remaining 224 are scheduled to arrive by Aug. 13. It is a rare Army example of unit rotation, in which all of the soldiers in a unit come and go together.

On arrival in Illesheim, each single soldier or family is hosted by a sponsor from the 6/6 Cavalry and will move straight into a house or barracks room.

Still, it&#8217;s been busy. Most soldiers are moving for the second time in a year. Cochran estimated that close to half in his squadron already has served in either Afghanistan or Iraq. And although they&#8217;ve received no deployment orders, the squadron&#8217;s members widely assume they&#8217;ll be sent to one of the war zones early next year.

The Longbow has drawn praise from its new pilots.

Although the Longbow looks only slightly different from the outside, its fire-control and radar systems have been vastly improved.

Its on-board computer can track up to 16 battlefield targets at once and fire at them automatically. The Longbow flight system uses state-of-the-art &#8220;glass cockpit&#8221; technology, which replaces the Alpha model&#8217;s dials and gauges with dual computer screens that display important flight data to the pilot.

Still, the aircraft doesn&#8217;t lack for critics. The added systems have also increased weight, which at times during the Iraq war forced Longbows to cut back on fuel or ammunition.