Firm pays $2.6M settlement after hiring base guards in Iraq who US says couldn’t shoot 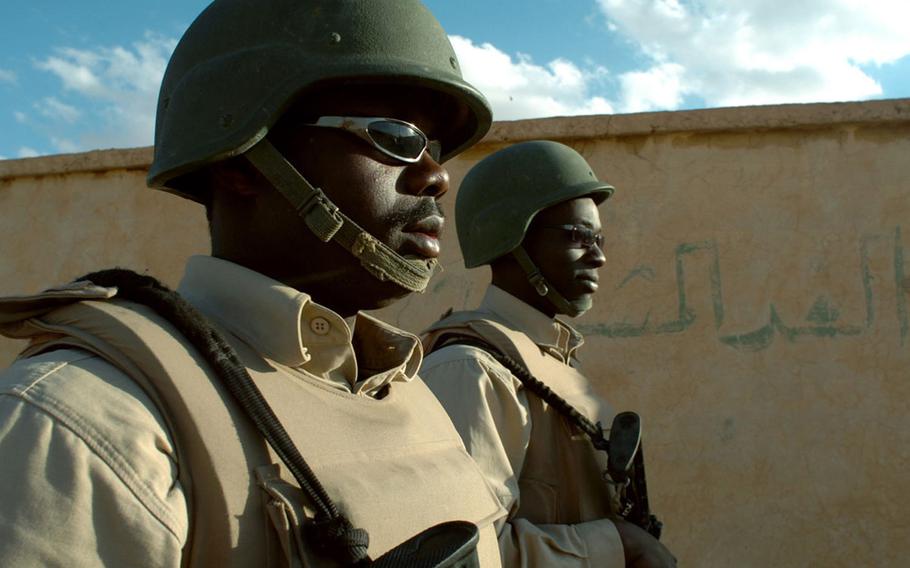 Matia Tibenda, and Alvin Ochieng, Ugandan contractors, do a roving patrol during a guard shift at Al Asad Air Base, Iraq, in 2006. Contractor Triple Canopy has agreed to pay a $2.6 million settlement to resolve claims that they billed the military for unqualified security guards at Al Asad Air Base in Iraq. (Marshall Thompson/U.S. Army)

A security firm accused of billing the Defense Department millions of dollars for guards at a U.S. air base in Iraq has agreed to pay $2.6 million in a settlement with the government, after allegations that the guards couldn’t shoot easy targets.

Triple Canopy, a Virginia-based security contractor, agreed Monday to settle allegations that the company submitted false claims for payment to the Defense Department for unqualified security guards at Al Asad Airbase, the second-largest air base in Iraq, in 2009 and 2010.

Triple Canopy admitted no wrongdoing as part of the settlement.

The settlement stems from a whistleblower suit accusing the company of violating the False Claims Act when it billed DOD for the guards, who were hired to protect U.S. and allied personnel but who could not pass an Army firearms proficiency test.

The company provided the guards under a one-year contract for perimeter security at Al Asad that began in 2009. It billed the government more than $10.4 million under that contract, of which more than $4.35 million was for the guards.

“Contractors must be held accountable for their actions,” said Dana J. Boente, U.S. Attorney for the Eastern District of Virginia, where the suit was filed, in a statement. “This settlement should remind contractors of the high value we place on safeguarding our personnel abroad.”

The suit alleged that Triple Canopy officials created false test score cards it was required to keep for government review to conceal the guards’ inability to pass the contractually required tests.

The government’s claims were based on a suit filed by a former Triple Canopy employee — Omar Badr, a medic and Army veteran — in 2011. The False Claims Act allows private citizens to file suit on behalf of the government. The government may then investigate the claims and choose to intervene in the suit.

Not one of the initial 300 Ugandan guards could pass the firearms proficiency tests, nor could several replacement guards, claimed Badr, who served with the Rangers until 2007 and joined Triple Canopy around February 2008.

To qualify on the firearms tests, given at a 27-yard distance but using paper printed with targets simulating distances from 50 to 300 yards, the guards had to score hits with 23 of 40 rounds fired. The test also involved changing magazines on the weapon — an AK-47 style assault rifle chambered for 5.56 mm ammunition.

The first group of guards who were supposed to have qualified on the course in Uganda could not load or unload their weapons when they were taken to a range in Iraq to zero their weapons a few weeks later in June 2009, the suit alleged. Most could hit the paper but not the printed targets, Badr claimed.

The suit alleged that when the Al Asad contract was awarded to another firm in 2010, Triple Canopy relocated the unqualified guards to other bases.

Triple Canopy denied that the guards were unqualified or that its employees falsified their scores. The company later agreed to settle the civil claims, which was not a determination of civil liability.

Under the terms of the False Claims Act, Badr will receive a share of the recovery — about $500,000.

Triple Canopy is facing a separate whistleblower suit, also filed under the False Claims Act, which alleges it failed to properly inspect weapons it provided as part of a contract for its teams protecting personnel from the U.S. Embassy in Baghdad.

That suit, which the government did not join after it was filed by a former employee last year, alleges company officials falsified inspection procedures and records and then fired the employee who brought the problems to company officials’ attention. The government may choose to join the suit at a later date.