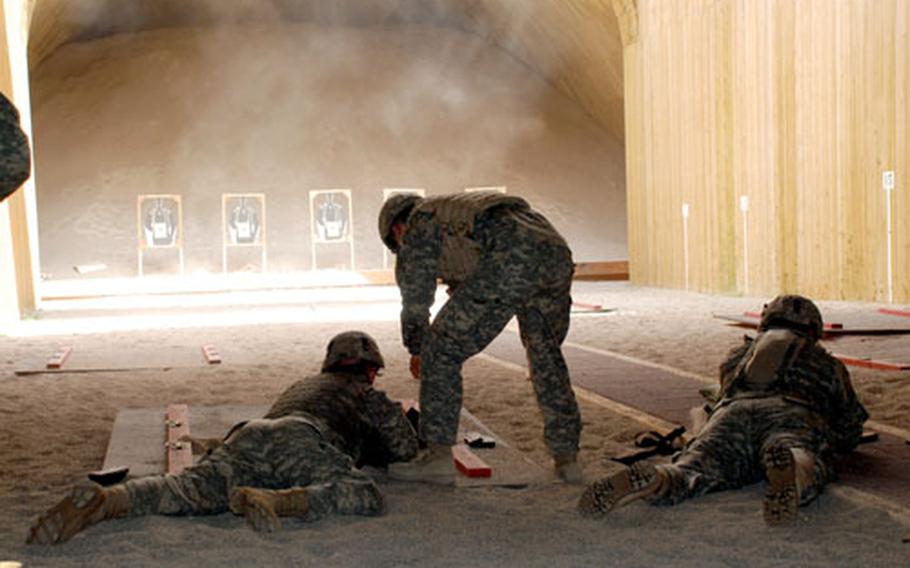 Soldiers from 1st Battalion, 10th Special Forces Group shoot at targets at one of the firing ranges next to Panzer Casern in Böblingen, Germany. (Courtesy of U.S. Army Garrison Stuttgart)

Soldiers from 1st Battalion, 10th Special Forces Group shoot at targets at one of the firing ranges next to Panzer Casern in Böblingen, Germany. (Courtesy of U.S. Army Garrison Stuttgart) Dr. Theis zur Nieden of Schoeniach points to the woods where the sound of military firing can be easily heard from his back patio. (Charlie Coon / S&S) 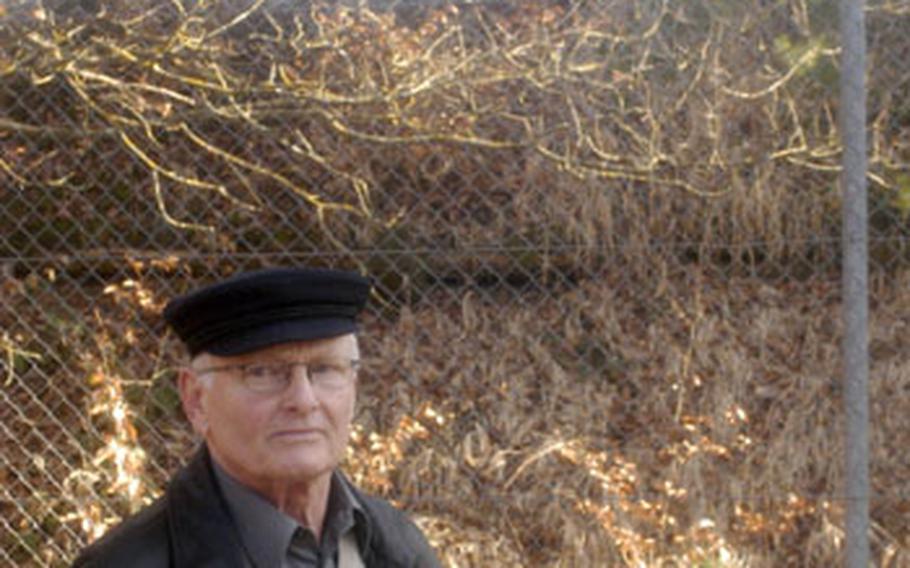 Uwe Jens stands outside the fence that surrounds the firing ranges next to Panzer Casern in Boblingen, Germany. Jens, who has lived in Boblingen since 1972, said he wished the U.S. Army would find another place to practice shooting its weapons. (Charlie Coon / S&S) 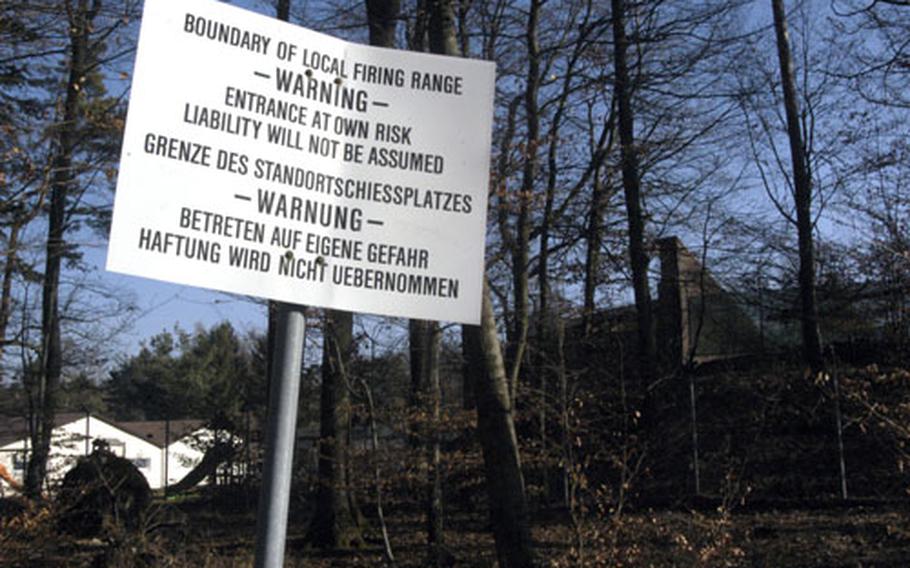 A sign outside the firing range facility at Panzer Casern in Boblingen, Germany. (Charlie Coon / S&S)

B&#214;BLINGEN, Germany &#8212; Uwe Jens gestured from inside his home of 36 years to the woods out back and reminisced.

Then his wife, Rita, hearing a familiar sound, walked to a glass door leading to their balcony and slid it open. "H&#246;ren?" she asked. Yes, one could hear it: gunfire.

For years residents have cussed, complained or simply shrugged over the sounds of military gunfire coming from B&#246;blingen Land Training Area&#8217;s firing ranges. Now, something might finally be done about it.

"I hope there will be concrete solutions in it," said Tobias Heizmann, mayor of neighboring Schoenaich. "I hope (the study) says, &#8216;If you do this, it will cost X-amount, but you will get these results.&#8217;"

"Sometimes it is quiet for two weeks, and sometimes it is extremely noisy from morning until night," said Dr. Theis zur Neiden, a retired IBM physicist who lives in Schoenaich. "Sometimes you can&#8217;t even talk it is so loud."

The D&#252;sseldorf, Germany-based Institute for Noise Control is conducting the study by inputting data to a computer program: range construction information, ammunition and weapon characteristics, and seasonal variables such as wind direction.

After the noise is sufficiently quantified, recommendations for noise abatement &#8212; the construction of new walls, for example &#8212; are expected to be made. Some lawmakers suggest that the range might be closed if it is found to be in violation of German noise law.

Anger over U.S. military noise has caused upheaval before.

Uproar over an urban warfare training complex at Okinawa&#8217;s Camp Hansen, built in 2005 by the Marine Corps, pressured the Japanese government into building a new complex that is farther away from public houses and roads.

In January 2005, a South Korean judge ordered the government to pay $7.8 million to 1,900 residents who suffered from noise coming from the Koon-ni Range, which American warplanes used for decades for bombing and strafing practice.

Strafing practice there was halted in 2000.

But in rural Baumholder, Germany, the 4,800 residents and those from nearby villages live in relative harmony with the 25,000-acre Baumholder Major Training Area, according to Baumholder&#8217;s mayor, Peter Lang, who is also a lieutenant colonel in the German army.

"Sometimes you have noisy training when you need to have planes in the air, and sometimes people get a little pissed off about it," Lang said. "But that happens not so often, five or seven times a year, and not for the whole day.

"In the past we had a lot of military shooting live artillery, but not anymore."

Two-thirds of training conducted there, Lang said, is done by the German army, which also runs the training area.

B&#246;blingen&#8217;s six firing ranges are situated on a plot measuring a little more than eight acres. It is located next to Panzer Casern, and its fence line is only a few hundred meters from homes in the populous city of B&#246;blingen and village of Schoenaich.

Panzer Casern and nearby Patch Barracks were built for the German army in the 1930s and taken over by the U.S. military after World War II. B&#246;blingen&#8217;s population has since increased from about 10,000 to 50,000, with people building homes closer to the firing range.

"The flats and residences were built mainly between 1950 and 1970," said Florian Toncar, a local representative to the German parliament. "In these times the shooting range was barely used."

Zur Nieden, the retired physicist, said he knew the training area was nearby 24 years ago when he moved into his scenic hillside home. The Cold War with the Soviet bloc had started to wind down.

Panzer Casern instead remained open, and in 1991 the 1st Battalion, 10th Special Forces Group moved there from rural Bad Tolz, about 30 miles south of Munich.

"The situation changed when the Special Forces were deployed to B&#246;blingen," Toncar said. "From this time there has been more intensive use of the shooting range. The problem has been very massive the last 15 years."

Uwe and Rita Jens, originally of Hamburg, were drawn to the Stuttgart area in the 1970s by jobs at IBM, Hewlett-Packard and Mercedes-Benz. Like many of their now-retired neighbors, they sit on their back patios listening to the sound of war and ask a seemingly simple question.

"People say there is a lot of space outside," Uwe Jens said. "Why not change the firing range to another place?"

The U.S. military has not asked Germany for land near Stuttgart to replace the B&#246;blingen firing range. That request would have to be made by the U.S. military to the German military, or Bundeswehr, according Cordula von Bestenbostel of the German Office for Federal Real Estate Administration.

The training area is "an important enabler in U.S. strategy," according to a written response by Army Garrison Stuttgart, which operates the range.

According to the garrison, the military has taken steps to lessen the noise: closing the range to nonmilitary users such as police, hunters and sport shooters, erecting noise barriers and limiting training times.

The noise study is scheduled to finish in October, but no money has been budgeted to follow through on noise-abatement recommendations that the study might produce.

Paul Nemeth, a local representative to the state of Baden-W&#252;rttemberg parliament, added that residents are somewhat encouraged that after years of complaining, it appears action toward lessening the noise &#8212; at least in the form of a yearlong study &#8212; is inching forward.

"It&#8217;s been well-received by everybody," Nemeth said, "because we are seeing that they are now taking this problem seriously."