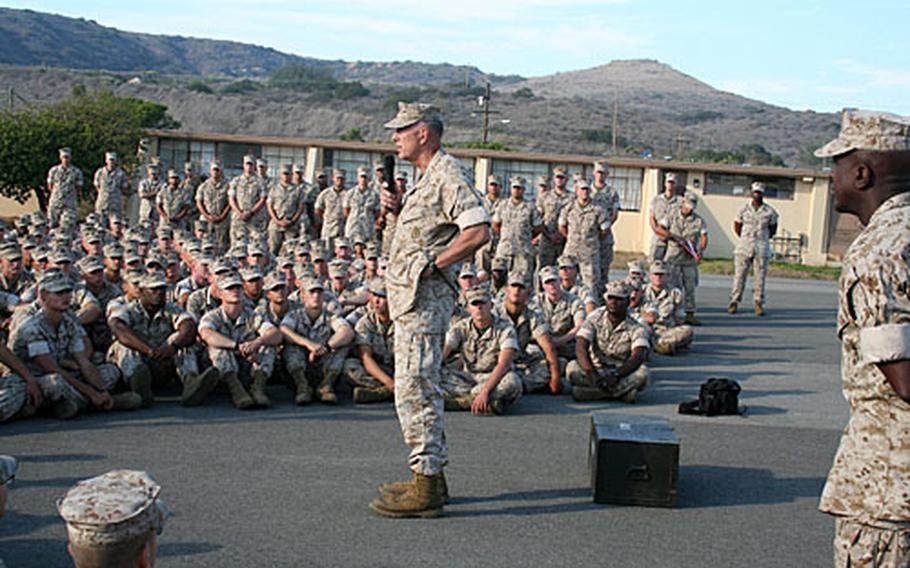 Marine Corps Commandant James T. Conway talks the 5th Marine Regiment at Camp Pendleton Friday to congratulate them for work the Marines did to set up an evacuation center on the base. (Lisa Burgess / S&S)

MARINE CORPS BASE CAMP PENDLETON, Calif. &#8211; Three fires on this sprawling, 200-square mile Marine base this week consumed hundreds of acres, but the only damage was one burned outbuilding on a firing range and a single, sprained ankle, according to officials.

Whether they were fighting fires, helping families evacuate their quarters, helping San Diego County residents, or evacuating themselves, &#8220;10,000 Marines were moving from place to place over the course of the week,&#8221; Commandant James T. Conway said Friday during a visit to Pendleton.

&#8220;All that was done without serious accident [and] a level of expertise I don&#8217;t think anybody expected entirely,&#8221; Conway told a members of 5th Marine Regiment who helped set up an evacuation center on the base.

It was a challenging week for the base&#8217;s Marines, pushing them to live up to their motto of &#8220;adapt and overcome&#8221; in ways that felt much like a battlefield, Pendleton base commander Col. J.B. Seaton III, said during a Friday briefing to Conway.

The smell of the acrid smoke, the look of the red sky at night and the rush from being involved in an all-out crisis operation &#8220;felt good, like home,&#8221; he said.

He just removed his blouse and boots, and collapsed.

With the on-base crisis mostly over Friday night, there were a lot of Marines in crash mode. DJs spun music to nearly empty clubs on base, despite the inviting cool ocean breezes bringing welcome, smoke-free air to weary lungs.

Earlier in the day, the skies over the base were a haze of headache-inducing smoke, as firefighters worked to put out the largest and last of the three fires, dubbed the &#8220;Horno Fire.&#8221;

That fire was one of two that began Tuesday morning, sending the 60 percent of the base&#8217;s firefighters who were not already off-post helping to fight fires in San Diego County rushing to the scenes.

The Horno fire caught first, at about 9 a.m. in an area occupied by the 1st Marine Regiment.

By midday Friday, the Horno fire was 80 percent contained, but had burned 20,000 acres, according to Marine Cpl. Paul Robbins Jr., a base spokesman.

At one point, the Horno Fire jumped Interstate 5, and it also prompted the evacuation of 850 Marine family members from a base housing area to the shelter site set up by the 5th Marine Regiment.

Another fire, which began on the Wilcox small arms training range where Pendleton Marines conduct most of the M-16 qualifications, also began on Tuesday, around 10 a.m., Robbins said.

That fire was completely contained by the following afternoon, after destroying 100 acres and damaging a minor outbuilding used on the range.