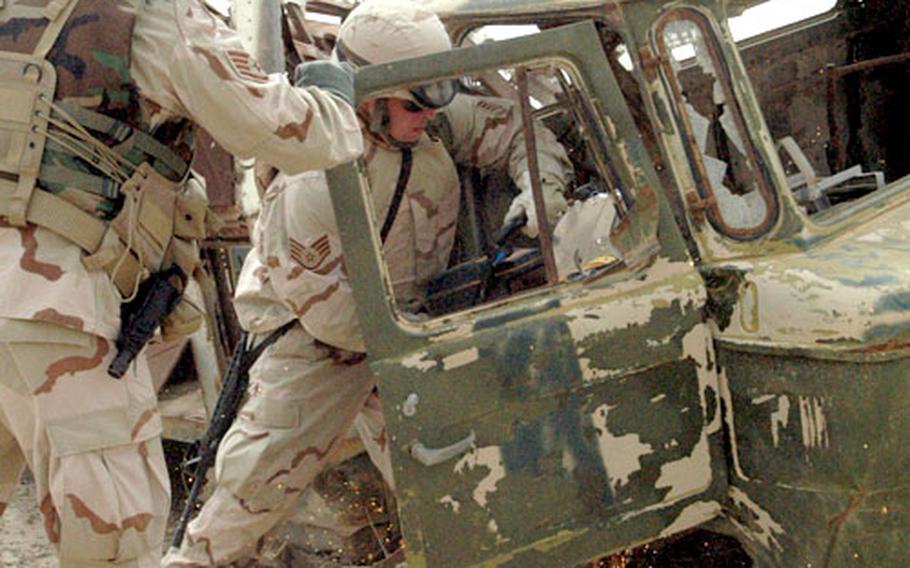 Airmen carry vehicle extraction tools to a simulated crash scene Monday during a training exercise at Ali Base in Iraq. (Monte Morin / S&S)

Airmen carry vehicle extraction tools to a simulated crash scene Monday during a training exercise at Ali Base in Iraq. (Monte Morin / S&S) 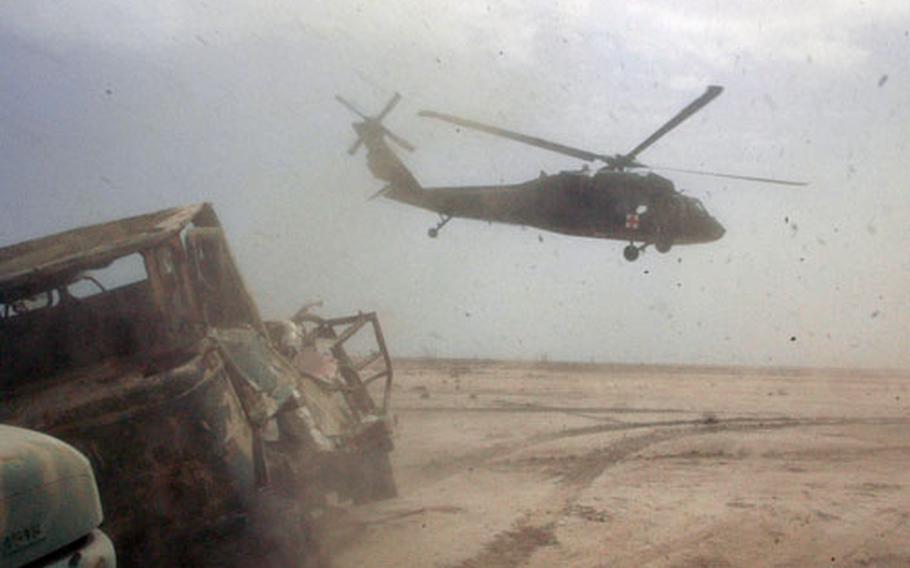 A medical evacuation helicopter heaves dirt and debris into the air before lifting off from a simulated crash site at an Ali Base junkyard. (Monte Morin / S&S) 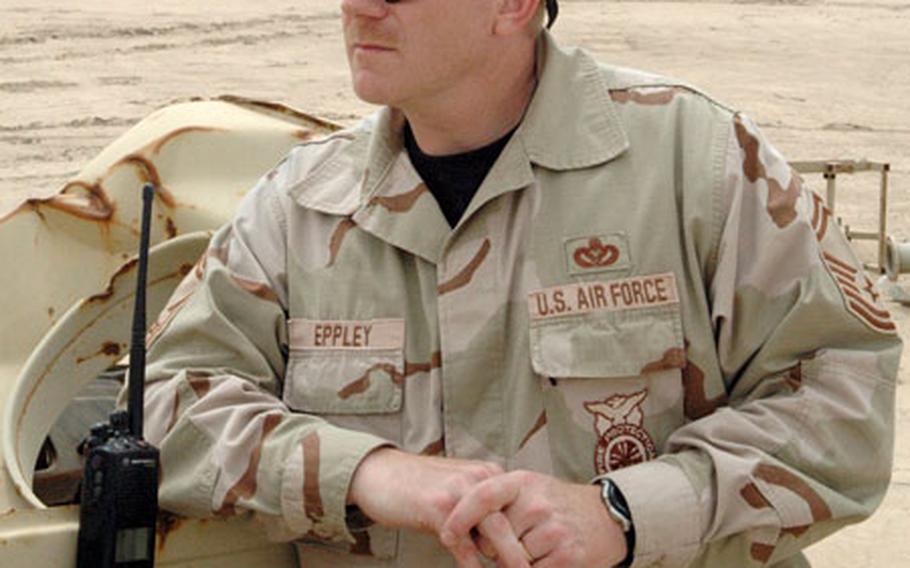 ALI BASE, Iraq &#8212; The blood and broken bones may have been fake, but the metal was bona fide real, Soviet steel.

During a training mission at the Ali Base &#8220;bone yard,&#8221; a team of Air Force firefighters and an Army air ambulance crew practiced the sweaty art of vehicle extraction on a junked Russian truck before airlifting a simulated victim to safety Monday.

Airmen with the 407th Expeditionary Civil Engineer Squadron&#8217;s Fire Protection Flight attacked the truck with a crowbar, a hydraulic device known as &#8220;the Jaws of Life&#8221; and a metal-shearing circular saw during a timed simulation at the airstrip&#8217;s vehicle junkyard.

As a shower of bright orange sparks rained from the circular saw, a phony casualty screamed and pumped theatrical blood to a wound on his lower leg.

The exercise was one of several staged by the 407th and the Army&#8217;s Company C, 3rd Battalion, 126th Aviation Regiment at the base on the outskirts of Nasiriyah.

The Air Force fire department&#8217;s Rescue Air Mobility Squad specializes in saving victims of automobile accidents, and responds to convoy incidents throughout the southern half of Iraq. Since November, when the group deployed to Iraq, airmen have responded to four such accidents. In each case, the victims have been Iraqi civilians.

A number of the specialists in vehicle extractions are guard or reserve airmen who work as firefighters in civilian life.

&#8220;The main difference between doing this type of work in Iraq and doing it at home is that you&#8217;re on your own here. You can&#8217;t call for backup,&#8221; said Senior Master Sgt. Randy Eppley, 39, of Georgia, Vt., and the fire department&#8217;s chief. Back home, Eppley is also the fire chief for Burlington International Airport.

In preparation for Monday&#8217;s drill, Staff Sgt. Vance Vansteel, 30, of Hawthorne, Calif., slipped a pair of old fatigues over a simulated broken leg. As he waited for the helicopter to arrive, he pumped fake blood into the wound from a plastic bag tied to his belt.

When the signal &#8220;Fire flight&#8221; was called, the airmen scrambled from their fire station to a Black Hawk helicopter and flew to the junkyard.

Ralls popped the smoke grenade in a clearing. But as the air ambulance prepared to land, drill supervisors threw the pilots a curve: They radioed to the helicopter that the LZ was littered with unexploded ordnance. They had to land somewhere else.

Once the helicopter touched down at a second spot, airmen piled out the door, carrying their tools and an electric generator to the battered truck.

The airmen went to work hacking the door off the truck and then, along with an Army medic, examined Vansteel and prepared him for the helicopter trip to the aid station. As Vansteel screamed over the roar of the helicopter engine, the team loaded him into the helicopter.

As Eppley, Ralls and other supervisors looked on, the helicopter lifted off from the junkyard, blasting dirt and debris in all directions. Once the ground squall ended and the beating of the chopper&#8217;s rotors had faded, the supervisors and observers spit dust from their mouths and slapped dirt from their uniforms.