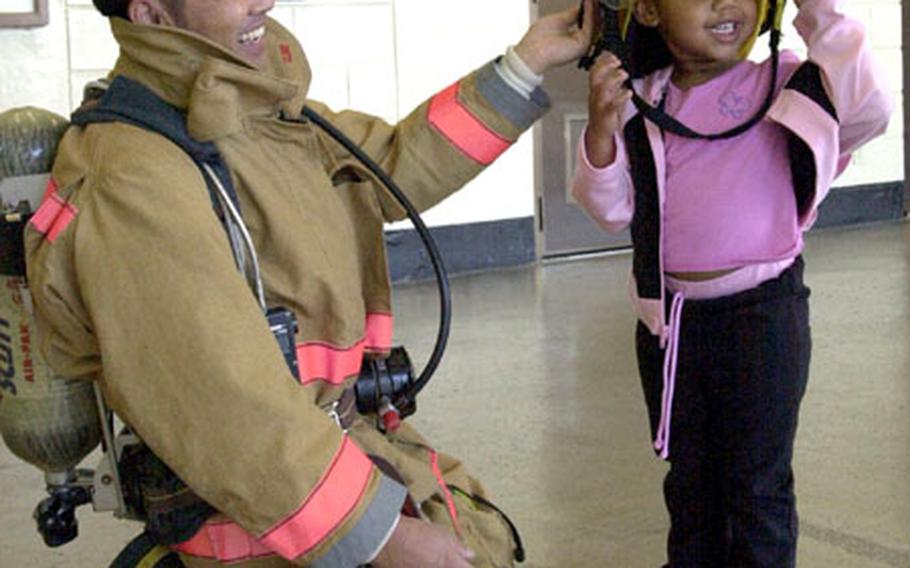 Gabrielle Parmer, 2, tries on the hat of a firefighter Friday during a visit to a Marine Corps fire station. (Fred Zimmerman / S&S)

Gabrielle Parmer, 2, tries on the hat of a firefighter Friday during a visit to a Marine Corps fire station. (Fred Zimmerman / S&S) 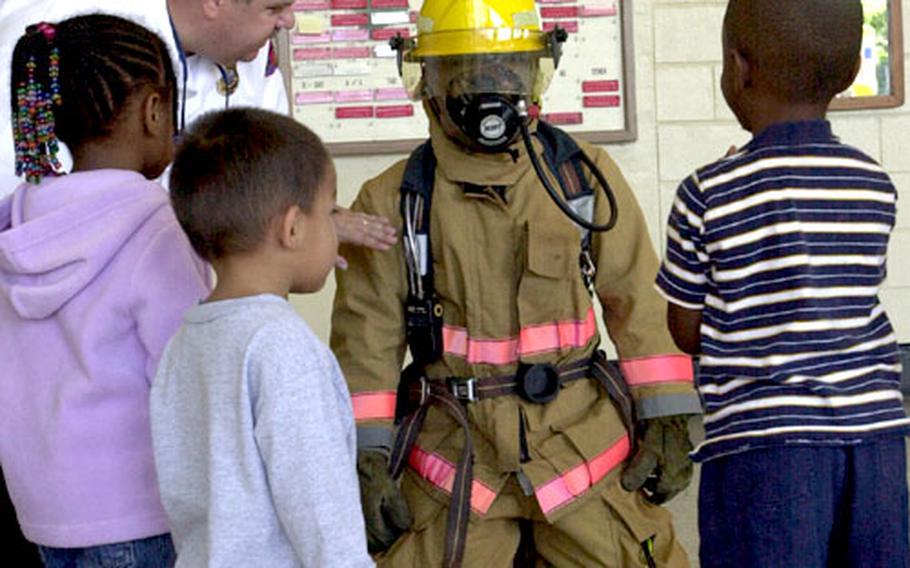 During the month, and even into November, the department has offered its services to all elementary schools on Marine Corps camps. For each school visit, Mark Sileikis, assistant fire chief for prevention and education, and his assistant, Hiroshi Kiyan, take one fire truck and an ambulance to schools that have accepted their offer.

The department had to turn it into a monthlong program &#8220;because we didn&#8217;t want to just do a 10-minute presentation and try to cram everything in &#8230; we have so many schools,&#8221; Sileikis said. He added that this year, they offered to make their presentation at the schools, rather than have the pupils come to the closest station. He said that works better for both: Schools slash travel time and firefighters can continue to train at the stations without interruption.

Sileikis said the department is doing an average of eight presentations a day, four to five days a week. Students learn about smoke detectors, the dangers of lighters and matches and what a fully equipped firefighter looks like. They&#8217;re even given homework: They&#8217;re told to go home and have a family meeting at which everyone agrees upon a safe meeting place in case of a fire.

At the end of each talk, the students tour the fire truck and ambulance, and most kids&#8217; favorite &#8212; Sparky the Firedog &#8212; makes an appearance. Each child receives a toy firefighter&#8217;s hat and badge, plus a bag containing pencils, rulers and coloring books. Sileikis said the department spent almost $10,000 on giveaway fire prevention materials this year.

Kiyan, who has been working in fire prevention and education for seven years, said this is the most extensive safety campaign he&#8217;s seen the department hold.

Sileikis said they also offer their services to local schools and day care centers, but those organizations must bring children to the firehouse so the trucks don&#8217;t go too far from base.

On Friday, six 1- to 4-year-olds from an in-home day care center on Camp Foster came to the fire station. Sileikis tailored his talk to their ages. He explained the dangers of matches and lighters and showed them the fully equipped firefighter, only his eyes visible behind his mask. Sileikis told the children not to be afraid of firefighters should one ever come into their homes.

Still, some of the children wouldn&#8217;t go near the fireman because he looked like a &#8220;monster,&#8221; so Sileikis had the man remove his equipment with the children watching. All were a little more receptive when they saw it was a person inside the gear.

One of the children&#8217;s caretakers, Beatrice Evans, said she wanted to bring them to the station because it&#8217;s important for them to learn about fire safety.

But the children said the best parts of the tour were meeting Sparky and being in the fire truck.

E-mail mcbjfire@mcbbutler.usmc.mil for more information on fire safety, or to arrange a talk.