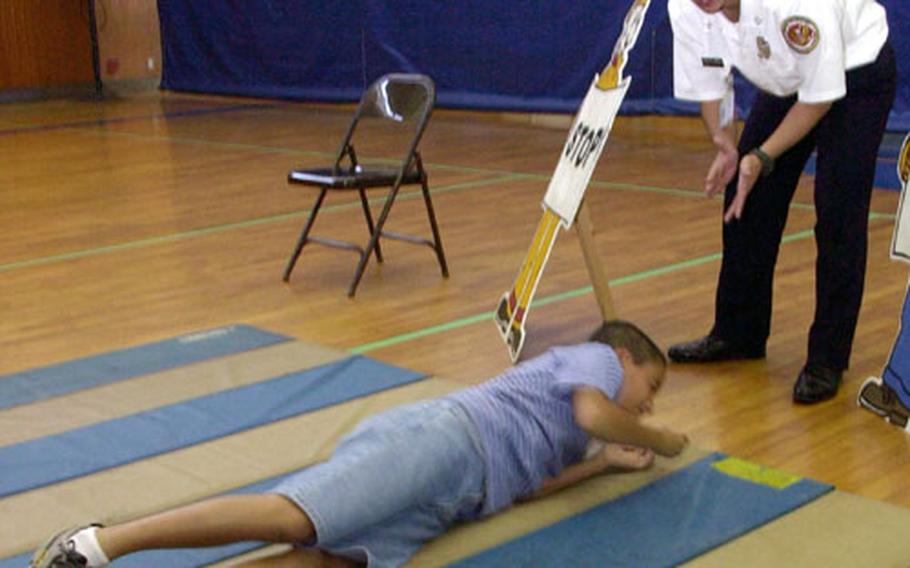 Seiro Hirano, a fire inspector with Sasebo Naval Base&#39;s Fire Department, encourages 5th grade pupil Travis Long from Jack N. Darby Elementary School as he practices the "stop, drop and roll" movement the youngsters were taught to use in case their clothes ever catch fire. The Sasebo Fire Department conducted Fire Prevention Week classes Monday and Tuesday at Sasebo Elementary School on the main base facility, and Wednesday and Thursday at Darby in the Hario Housing Village. (Greg Tyler / S&S)

SASEBO NAVAL BASE, Japan &#8212; In an emergency involving a structural fire, recalling catchy phrases such as &#8220;stop, drop and roll&#8221; can save lives.

When untrained people go back inside a structure that&#8217;s on fire, the results usually are more tragic than if they&#8217;d stayed away from the blaze, he said.

&#8220;If people go back inside, it usually results in them being trapped or injured as well and makes it more of a difficult rescue for the fire department once they get on the scene. So, it&#8217;s best that once you get out, stay out,&#8221; said Clark, who&#8217;s in his fifth year of coordinating these annual school programs.

Each year, National Fire Prevention Week is scheduled during the week of Oct. 9, the anniversary of the Great Chicago Fire, Clark said. In only 27 hours, the Chicago inferno killed more than 250 people, left 100,000 homeless and destroyed about 17,400 buildings and more than 2,000 acres, according to National Fire Protection Association statistics.

The elementary school classes learn using a set resembling a bedroom. One by one, the pupils pretend to be asleep when a smoke detector alarm rings. Once they hear the alarm, they must decide on the safest and quickest method of escape.

For example, if the doorknob is red with heat, they might go out a window. If there are flames right outside the window, they might exit one of the doors. In all cases, the pupils are instructed to stay low, move quickly and proceed to an agreed-upon meeting place outside.

The classes also feature instruction and practice on the classic &#8220;stop, drop and roll&#8221; maneuver in the event the children&#8217;s clothing catches on fire.

Kristina Crane, a fifth-grade Darby teacher who was with her pupils at a Thursday session, said the teaching methods are effective.

A new instructional tool for the classes was introduced last year, and used again for 2003. The Hazard House is a large doll house structure split in half to show the rooms in a typical home. It&#8217;s also wired to simulate fires.

Clark uses the tool to demonstrate fire hazards in the home, such as Dad kicked back on the couch smoking a cigarette. A fire starts, and the Hazard House produces real smoke in the little room.

Also, he said, &#8220;You can show a computer room, with all the electrical outlets plugged in and overloaded, and if I press the right button, it creates a buzz and hisses and sparks. You can demonstrate fires that could occur almost anywhere in the home.&#8221;

The importance of the lessons learned was not lost on Maria Castaneda, one of Crane&#8217;s pupils.

&#8220;I think they made it both fun and interesting. They made it so we can learn different things from them, because there was also another fireman there, and we learned about all the different kinds of fire-suit clothing they wear,&#8221; she said.