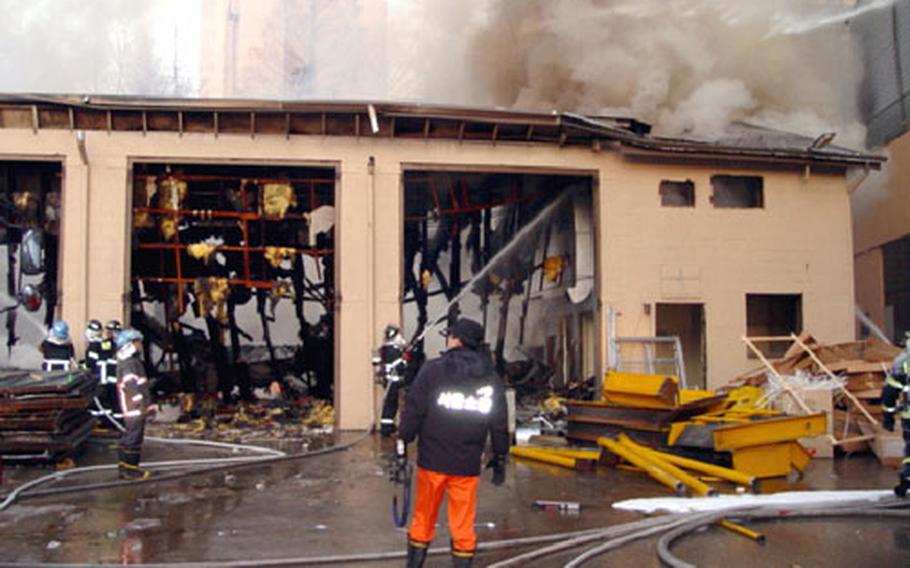 Garrison firefighters received the report because the blaze occurred on the site of the former United Nations Command Compound near the garrison, which had been closed and returned to the South Korean government.

They responded immediately to the call with one fire engine, a four-man crew and two senior officers, said fire chief Alex Temparado.

When they arrived at the scene, the building &#8212; a three-bay former motor pool &#8212; was &#8220;fully engulfed,&#8221; said assistant fire chief Harold Persons. Persons said the fire may have been caused by welding equipment being used in the demolition of the building.

When garrison firefighters arrived, the Yongsan-gu firefighters had insufficient water pressure to fight the blaze and had to use water from the USAGY fire engine, Temparado said.

No injuries were reported and no U.S. property was damaged, said USAGY spokesman Dave McNally.

The South Koreans dispatched 45 firefighters and 10 trucks to the scene, a South Korean spokesman said Friday.

He said that an investigation continues, but that the design on the building, with its layered, high ceiling, is making it difficult to find the origin of the fire.

USAGY has an agreement with the Yongsan-gu Fire Department in which each department helps respond to the other&#8217;s emergencies.

As part of the agreement, the fire departments train together &#8220;at least quarterly,&#8221; Temparado said.

The last time the garrison fire department assisted with an off-post fire was in early 2007, when an apartment building near the garrison&#8217;s Gate 17 caught fire, Temparado said.

Stars and Stripes reporter Hwang Hae-rym contributed to this report.