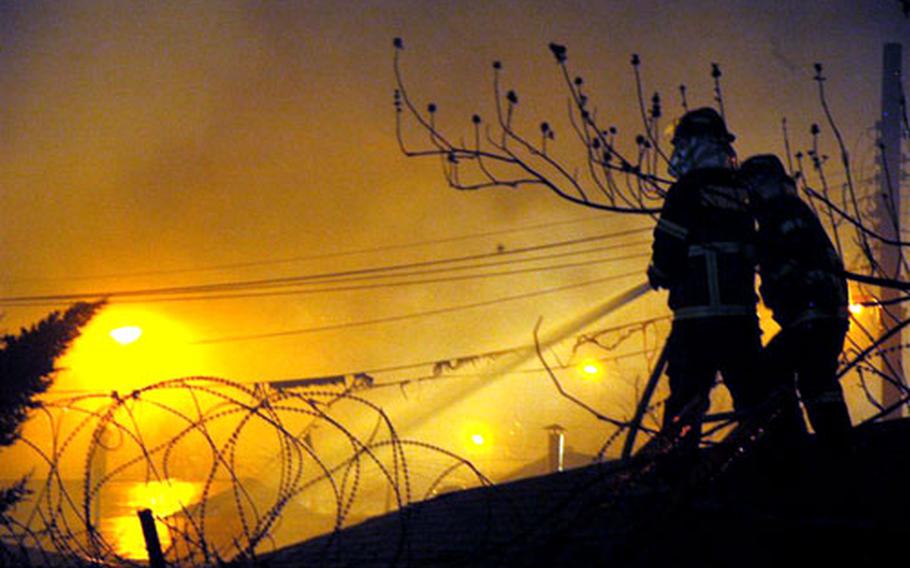 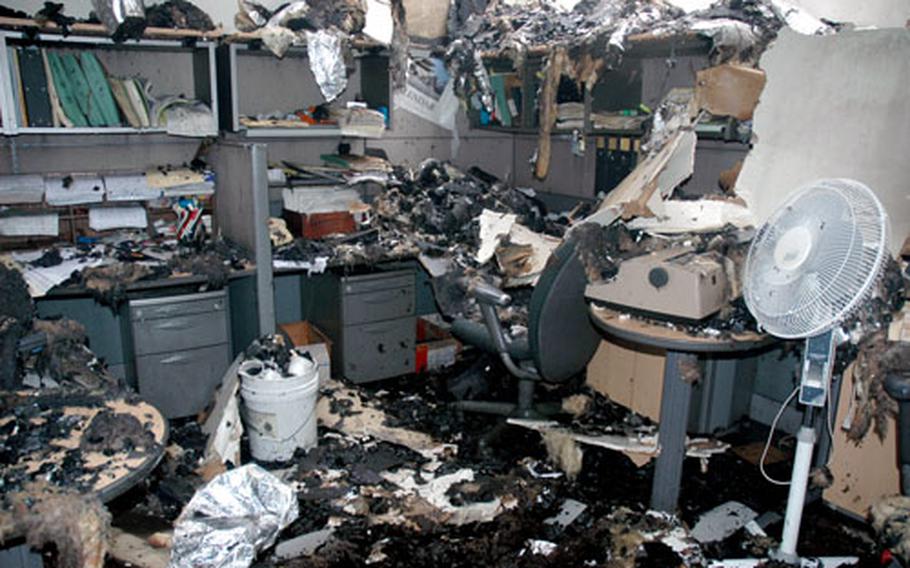 The office of Chae Du-sok, a worker at the heating office for the Directorate of Public Works on Yongsan Garrison. (Teri Weaver / S&S)

SEOUL &#8212; Like so many municipal fire departments, the headquarters station in the Yongsan district of Seoul has a street-by-street, building-by-building map of its neighborhoods on the wall of its communications room.

From the wall map, or from the on-screen computer maps automatically generated when an emergency call comes in, officials can pinpoint the location of a fire before they get in their trucks and roll out.

But at the Yongsan-gu station, both the wall and computer maps have a 635-acre area in the middle of their city district that remains blank except for a few unnamed roads.

That square mile is Yongsan Garrison, the U.S. military&#8217;s headquarters base in Seoul, which city firefighters help protect when help is needed. And help was needed when a major fire broke out on the base March 16.

Yongsan-gu fire Chief Lee Jong-whan said he understands the U.S. military&#8217;s concerns about security and, therefore, the lack of information his department has about the base. Similar restrictions exist for South Korean fire departments covering Korean military bases, he said.

Yet, Lee weighs that secrecy against his department&#8217;s ability to fight fire and against safety concerns for his firefighters. During the base fire earlier this month, 137 of them responded without initially knowing exactly what buildings &#8212; or what potentially hazardous materials &#8212; they were trying to save, he said through an interpreter on Tuesday.

Area II fire Chief Alex Temporado, whose office is in the fire station at Yongsan Garrison, understands those concerns. He had 40 of his own firefighters battling that early morning blaze, which destroyed three buildings and sent three South Korean men to the hospital in critical condition.

It&#8217;s one of the lessons learned from the combined effort to battle the biggest fire at the garrison in at least 35 years, Lee and Temporado said in separate interviews last week. They&#8217;ve already talked, at the scene that night and since the fire, and both welcome more training.

For now, both chiefs say they feel confident the mutual-aid response agreement between the two fire departments works and the handling of the recent fire proved that. The majority of Temporado&#8217;s staff is South Korean and he relies on his senior firefighters to help with translation just as they did on March 16.

But Lee did say he thought it could have been worse had an external gate been locked, because no military official was there at the first moment Korean firefighters arrived. When asked what he would have done, he said they would have figured out another way to get inside.

The fire chiefs also acknowledged the response revealed frustrating challenges when departments from different countries fight a fire on a U.S. military base. The challenges involved language and layout, with the American fire chief wishing he spoke Korean to speed command direction and the Korean fire chief wishing he knew more about the contents and possible dangers within the buildings that his firefighters were trying to save.

Over the last year, the Area II and Yongsan-gu fire departments have trained together four or five times on forcible entry, structure fires, hazardous materials and other areas, Temporado said.

Fires requiring mutual aid, however, are infrequent. Temporado said the recent fire was the first need for off-base help during a fire in his three years as chief.

The infrequency shows when Lee, a nine-year veteran at his department, was asked how familiar he was with the garrison. He said he knew the locations of hydrants and the schools.

How to report an emergency at Yongsan