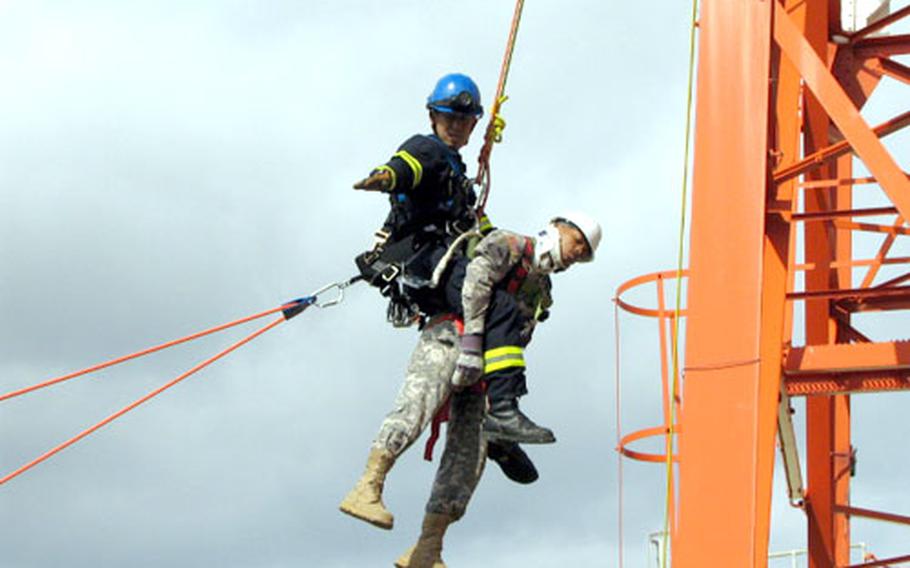 Firefighter Diaki Kawabata motions for his crew to begin to lower him down from a communications tower on Camp Foster during tower rescue training Thursday. Army Sgt. David Gonzalez. Gonzalez organized the drill and played the part of one of two "victims" during Friday&#39;s scenario. (David Allen / S&S)

Firefighter Diaki Kawabata motions for his crew to begin to lower him down from a communications tower on Camp Foster during tower rescue training Thursday. Army Sgt. David Gonzalez. Gonzalez organized the drill and played the part of one of two "victims" during Friday&#39;s scenario. (David Allen / S&S) 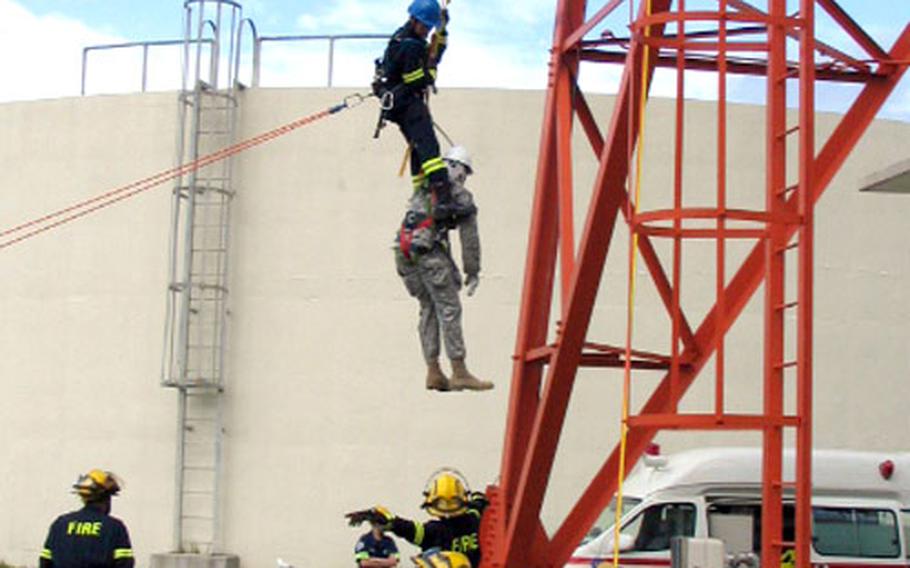 The drill was to rescue two Army tower maintenance workers who were &#8220;injured&#8221; some 45 feet above the ground.

Army Sgt. David Gonzalez, a communications tower maintainer with the 14th Maintenance Outside Plant unit of the 58th Signal Battalion, designed the scenario. He also was one of the victims, hanging off a steel girder for about 45 minutes.

&#8220;They were quick to ascertain that Spc. Donald Taylor, the other victim, was in more serious condition and needed to be lowered to the ground first,&#8221; Gonzalez said. &#8220;Then they expertly reached me, determined my condition and lowered me to safety.&#8221;

The Army is in charge of communications for all services on Okinawa and Gonzalez&#8217; crew is responsible for maintaining 14 towers ranging in height from 160 feet to the 260-foot tower in the former Futenma Housing area of Camp Foster.

&#8220;We developed these exercises back in 2004 when I realized no one had training to make rescues if anyone experienced any problems,&#8221; Gonzalez said. &#8220;In the event something disastrous would happen, we wanted to know who would come to our rescue.&#8221;

Gonzalez, 27, said the Marine Corps Base Japan Fire Department participated in devising the training conducted at the various Marine bases on Okinawa.

&#8220;As a communications tower maintainer, it makes you feel a whole lot better knowing these guys know how to get to you and lower you to safety in the event of an emergency,&#8221; he said.

During Thursday&#8217;s drill, Gonzalez and Taylor, 22, climbed some 45 feet up the tower and then secured themselves in hard-to- reach positions. They dangled limply as the firefighters climbed to reach them.

Firefighters on the ground controlled safety lines as the rescuers made quick checks of the condition of the two soldiers, placed braces around their necks and secured them to harnesses that would enable them to be safely lowered.

Once on the ground and checked by a paramedic, Gonzalez leaped to his feet. &#8220;Miracle cure!&#8221; he yelled as the action part of the exercise wound up.