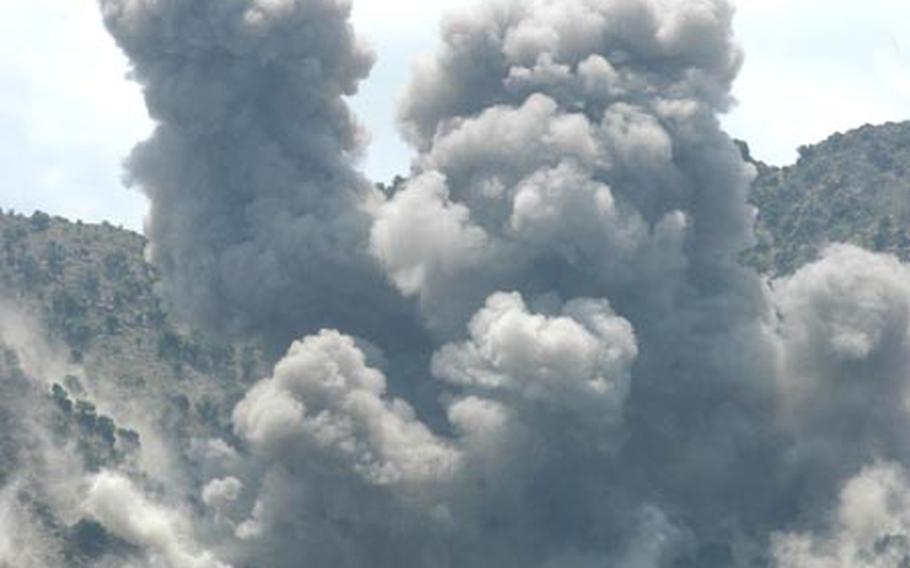 A Kiowa Warrior helicopter flies over billowing clouds of smoke and debris raised by two bombs dropped by a B-1 bomber Saturday near the village of Tut Naw in northeastern Afghanistan. Three Afghan army soldiers and at least seven insurgents were killed in a gun battle Saturday in the valley above the village that’s close to the Pakistan border. (Kent Harris / S&S)

A Kiowa Warrior helicopter flies over billowing clouds of smoke and debris raised by two bombs dropped by a B-1 bomber Saturday near the village of Tut Naw in northeastern Afghanistan. Three Afghan army soldiers and at least seven insurgents were killed in a gun battle Saturday in the valley above the village that’s close to the Pakistan border. (Kent Harris / S&S) 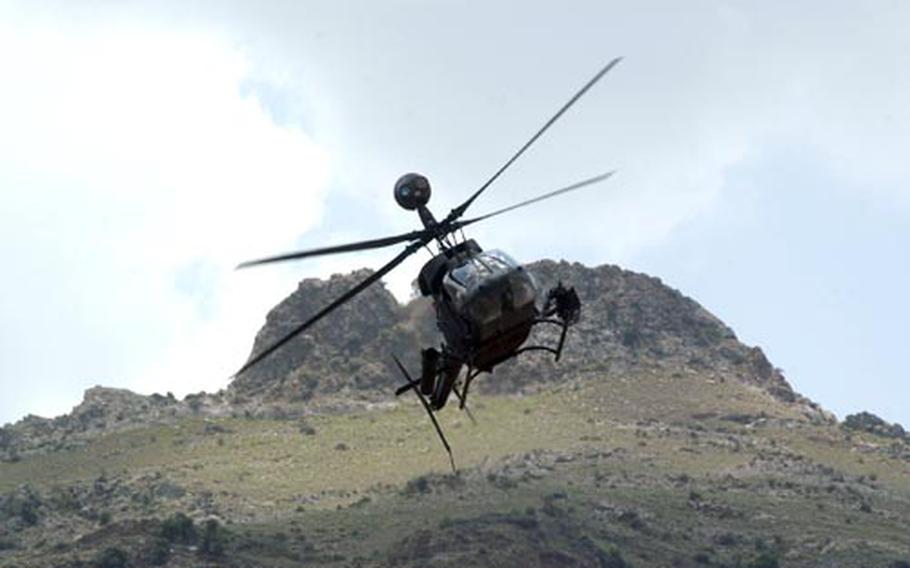 A Kiowa warrior helicopter swings away from a mountain ridge after checking for insurgents Saturday during a firefight near the Afghan village of Tut Naw. A pair of Kiowas engaged insurgents who had been in a firefight with Afghan and American forces earlier in the morning. At least seven insurgents were killed. (Kent Harris / S&S) 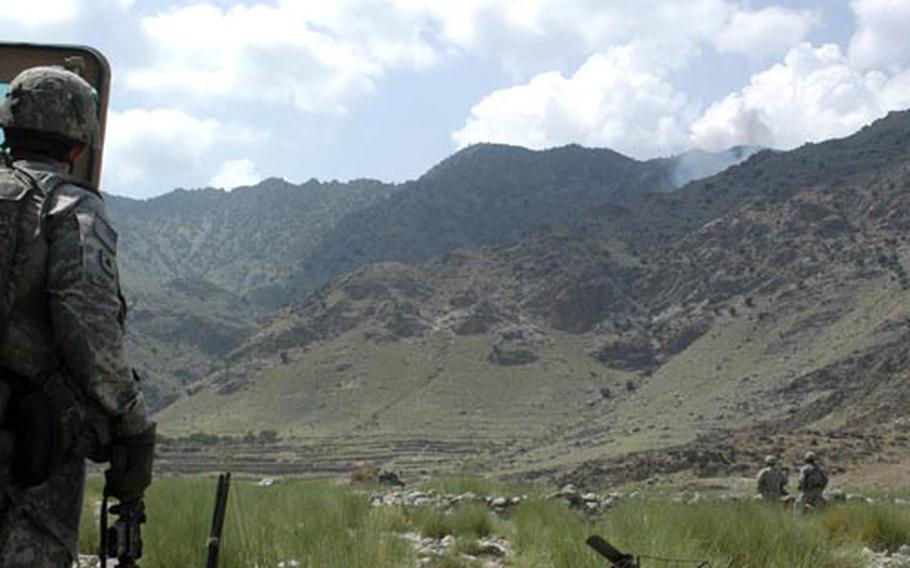 Lt. Col. Bill Ostlund and other soldiers from the 2nd Battalion, 503rd Infantry Regiment watch a Kiowa helicopter follow up a strafing run against the mountainside Saturday during a fight between insurgents trying to cross the border into Pakistan and Afghan and U.S. forces. A U.S. Marine embedded with the Afghan National Army was wounded and three ANA soldiers were killed in the firefight, which left at least seven insurgents dead. (Kent Harris / S&S)

TUT NAW, Afghanistan &#8212; One U.S. Marine was wounded, three Afghan National Army soldiers were killed and at least seven insurgents were slain in a firefight Saturday on the outskirts of a village a short hike from the Pakistan border.

The fight began Saturday morning when soldiers from Company D of the Vicenza, Italy-based 2nd Battalion, 503rd Infantry Regiment and their Afghan counterparts discovered a small group of insurgents apparently trying to retreat up a valley into Pakistan.

Snipers from the battalion&#8217;s headquarters company initially killed three insurgents, according to Lt. Col. Bill Ostlund, the battalion commander. ANA soldiers, accompanied by their American embedded trainers, then pursued the insurgents into the valley. Several firefights ensued. One Marine embedded with the ANA was shot in the arm before killing the person who had shot him. The Marine, who was not identified, was medically evacuated and was in stable condition, Ostlund said.

One Afghan soldier was killed and two were wounded in the fighting. Ostlund, leading a convoy to a scheduled meeting with local Afghan leaders, diverted to the scene to try to help the wounded troops. Soldiers from the convoy and Company D watched from about 500 meters south of the village of Tut Naw as Kiowa helicopters strafed the mountainside with machine-gun fire and rockets, and reported killing more insurgents. Their fire and machine-gun fire from the mountain could clearly be heard and seen from where U.S. soldiers were standing by. The Kiowas later attacked positions where insurgents might have been hiding, but couldn&#8217;t report conclusive results.

Meanwhile, ANA reinforcements scaled the mountain and recovered the remains of their slain comrade and discovered that the other two wounded soldiers had died. Ostlund then called in a strike from a B-1 bomber, which dropped two bombs that created huge clouds of smoke and debris.

A Black Hawk helicopter later arrived to carry away the remains of the ANA soldiers from the valley. An Apache helicopter and four Kiowas provided air support during the recovery.

Ostlund said that insurgents forced the residents of Tut Naw &#8212; a small collection of mud huts and terraced fields about two kilometers from the road that connects Asadabad and Jalalabad &#8212; to flee a few weeks ago.

The village sits at the bottom of a valley that extends into Pakistan.

"It&#8217;s been comparatively low risk for them to come through here," Ostlund said. "The Kunar River is only about 2&#189; kilometers away and if they manage to cross that they can advance into other areas of Kunar Province," Ostlund said.

He said U.S. and Afghan forces visit the area routinely and returned this time in a shorter period than usual, apparently surprising the insurgents.

"Two years ago, there would be mule trains coming through here," he said. "It was basically a highway. Now it&#8217;s just a trickle."

He said he had mixed feelings about calling for the heavy bombs.