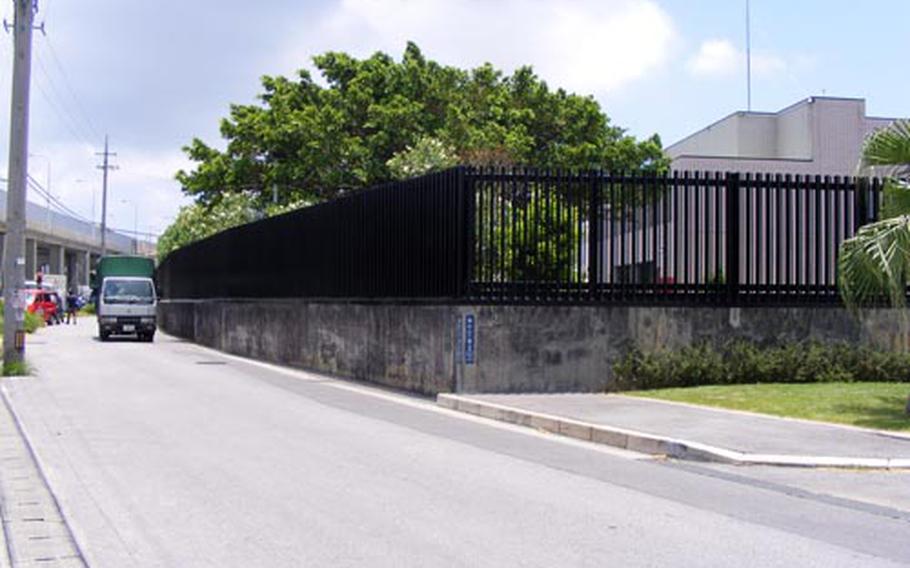 Okinawa police suspect someone on a black motorbike threw a firebomb over the fence of the U.S. Consulate in Okinawa. No damage to the building or any injuries were reported. No one has taken responsibility for the attack. (David Allen / S&S)

Okinawa police are investigating the incident, which was reported at 1:15 p.m. by a group of people who were in the parking lot of an adjacent shopping mall and heard glass shattering and saw flames and smoke coming from the consulate compound, a prefectural police spokesman said.

There was no warning and no claim of responsibility as of late Monday, the spokesman said.

The consulate building was not damaged and no injuries were reported. The consulate was closed for a prearranged holiday.

One person who called police on a cell phone said he saw someone on a black moped speed from the area just after the explosion. The rider wore a white helmet.

The firebomb, described as a "Molotov cocktail" &#8212; a glass bottle filled with a flammable substance and a rag wick at the mouth&#8212; landed on the lawn near a concrete stage at the rear of the consulate compound, the police spokesman said. The fire charred a 30-square-meter portion of the lawn near the back gate, he said.

Police believe the object was thrown over the fence from a narrow side street that runs along the east boundary of the compound. Monday afternoon a single Okinawa police officer was watching the area.

U.S. military bases on Okinawa, which had gone to Force Protection Condition Bravo last week during the Group of Eight Summit in Hokkaido, were back at condition Alpha on Monday. No heightened security condition was ordered by U.S. Forces Japan in response to Monday&#8217;s incident.