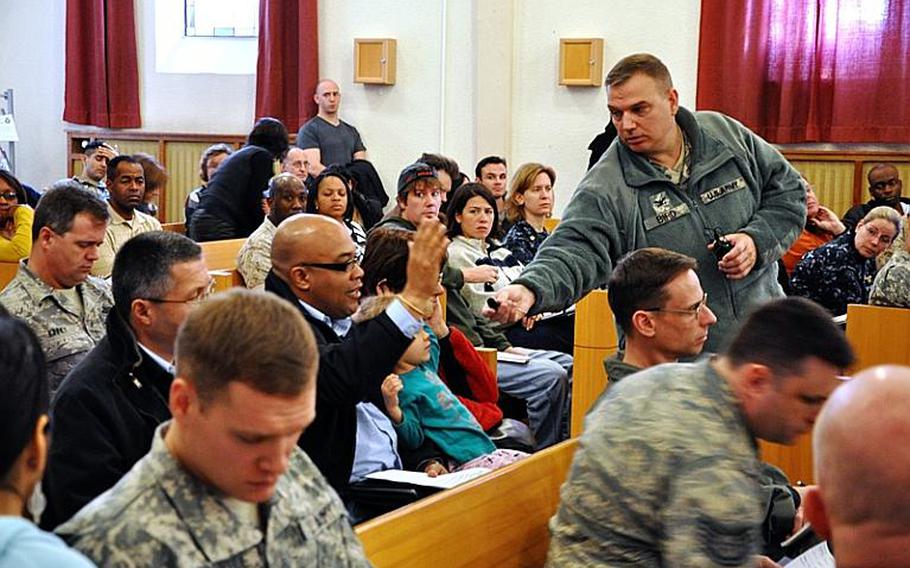 It all went up in flames Saturday at the warehouse holding the personal property of 97 families in the Stuttgart military community.

&ldquo;But some things mean more than others. I know what we have, right down to every fork and knife,&rdquo; said Patty Bellinger, a military spouse whose careful inventory will come in handy for the eventual insurance claim she must file.

&ldquo;We lost all of our wedding photos,&rdquo; Bellinger said. &ldquo;Those are the things you can&rsquo;t put any value on.&rdquo;

On Wednesday, more than 200 people gathered at the Panzer Kaserne Chapel to figure out the way forward after losing all their possessions in the fire.

More than 300 firefighters responded to the Saturday blaze in Schwieberdingen, about nine miles from Stuttgart.

The fire caused about 3 million euros ($4.3 million) in damage, according to a press release from the Ludwigsburg police, who are continuing to investigate the cause of the blaze.

For many families, Wednesday marked the beginning of what will likely be a long process toward getting their lives back in order,

During the briefing at the Panzer Chapel, garrison officials urged families to create itemized inventories of all of their property to begin the claims process. The military will be assisting families as they work to get reimbursed from the moving company contractor, officials said.

&ldquo;I can&rsquo;t guarantee you&rsquo;re going to get 100 percent of everything back,&rdquo; said Maj. Michael McGovern, judge advocate for the U.S. Army Garrison in Stuttgart. &ldquo;But the more work you do on your inventories, the better off you&rsquo;ll be.&rdquo;

While there is a $50,000 cap for damages filed with the company &mdash; Andreas Christ Spedition and M&ouml;beltransport GmbH &mdash; families also can file claims for reimbursement from the military claims office in Stuttgart or through private insurance companies. The process will vary with each case, officials said.

&ldquo;Is this going to be long process? I apologize, it may be,&rdquo; McGovern said.

Some families are still hoping that something can be salvaged. Some said they&rsquo;ve gone to the site of the fire, described seeing some containers out in the open and undamaged. That raised concerns that something worth saving could be stolen.

Garrison officials said they would make contact with local authorities to ensure the fire scene was secured.

&ldquo;It&rsquo;s just material stuff, but then you start to think about the little things. All the photos and what can&rsquo;t be replaced,&rdquo; said Capt. Jonathan Ciosek, a soldier with the 1st Battalion, 10th Special Forces Group.

&ldquo;But you have to deal with it like a soldier,&rdquo; said Ciosek, who just moved to Stuttgart from Fort Bragg, N.C.

According to the Ludwigsburg police, the fire started at an outside wall close to an area with wood containers. It took firefighters until early Tuesday morning to extinguish the embers.

German police special investigators are conducting an analysis of the burned material to determine what caused the fire. One Stuttgart fire official was quoted in the Stuttgarter Zeitung daily paper as saying that he believed the fire was intentionally set.

Meanwhile, the military community in Stuttgart is trying to coordinate relief efforts and a method for accepting donations.

Stuttgart garrison officials, along with representatives from U.S. European Command and Africa Command, are working on a plan for accepting donations and compiling a list of items families will need in the weeks ahead, according to the Stuttgart public affairs office.

Stars and Stripes&rsquo; Marcus Kloeckner contributed to this report.