Fire safety is October focus for kids at Yokosuka 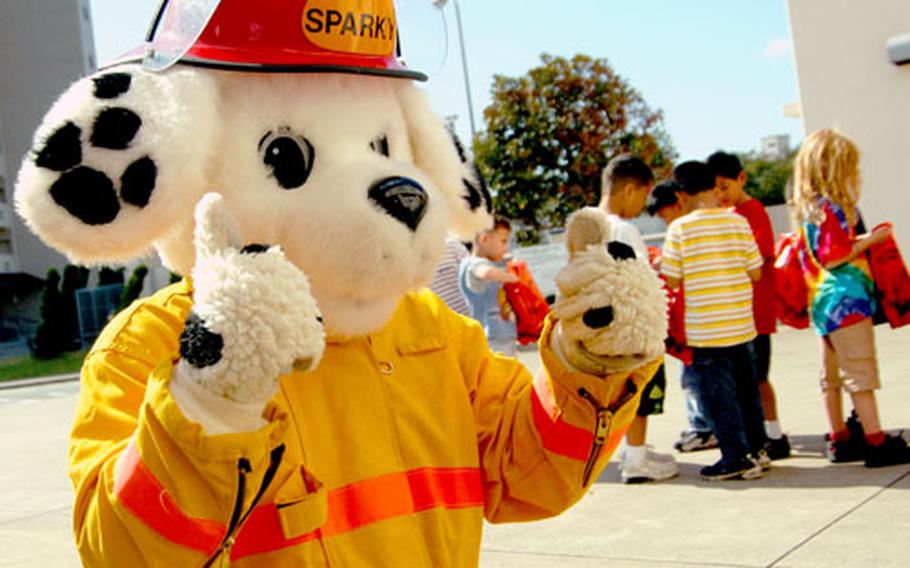 Fire Inspector Jody Mayo talks to a 2nd-grade class from The Sullivans School at Yokosuka Naval Base on Tuesday. (Allison Batdorff / S&S) After his rescue from a burning building, Sparky the Fire Dog was comforted by students from The Sullivans School during the CNFJ Regional Fire Department’s fire safety training Tuesday. (Allison Batdorff / S&S)

YOKOSUKA NAVAL BASE, Japan &#8212; Judging by the enthusiastic yells, everybody wanted to see Sparky the Fire Dog. But there was a catch &#8212; before any of The Sullivans second-graders saw a spot of fur, they first had to promise never to play with matches or lighters.

The deal was struck just as smoke filled the room in the Commander, Naval Forces Japan Regional Fire Department&#8217;s training house. The kids knew what to do &#8212; crawl to the door, exit quickly and head for the meeting point.

About 1,000 base children, from kindergarten through fifth grade, will go through fire-safety training this month, said CNFJ Chief Fire Inspector Yuko Hasegawa. The detailed course is about 30 minutes long, she said.

&#8220;Several parents have come up to me and said that the training is a lot more than the kids would get in the States,&#8221; Hasegawa said.

It includes a tour of the training house &#8212; a one-bedroom home with several bells and whistles. Heated doors clue kids in on how to test doors first before opening them and real smoke billows from the stove and air vents.

After practicing how to exit a home that is on fire, the children finally see Sparky &#8212; but the human-sized dog is inside a burning tower. They shout &#8220;Fire&#8221; and find a firefighter to help the dog, then witness the rescue. The kids also learn how a firefighter&#8217;s self-contained breathing apparatus works and have a chance to ask questions.

Other Fire Safety Month programs include a drawing contest between children at Yokosuka, Ikego and Negishi. The winner will be announced Friday at 5 p.m. outside the Yokosuka Commissary.