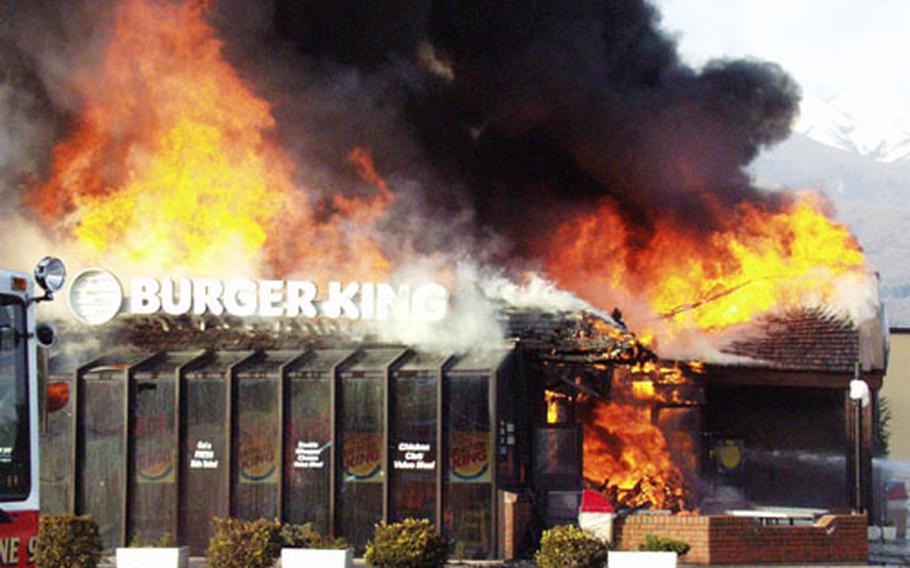 The Burger King building on Area 1 at Aviano Air Base went up in flames Monday afternoon. Much of the ceiling was already in flames by the time base firefighters arrived. (Kent Harris/Stars and Stripes)

The Burger King building on Area 1 at Aviano Air Base went up in flames Monday afternoon. Much of the ceiling was already in flames by the time base firefighters arrived. (Kent Harris/Stars and Stripes) AVIANO AIR BASE, Italy &#8212; A fire Monday destroyed an on-base Burger King restaurant that served hamburgers to Americans and Italians for more than 17 years.

No one was injured in the afternoon blaze, but the building was left in ruins.

Airman Francisco Mendez and Staff Sgt. Saulo Ortiz were leaving the education center nearby at about 1:30 p.m. when they heard people talking about smoke.

The two Air Force members, both assigned to the 31st Logistics Readiness Squadron, said they entered the building and told the customers and employees to leave.

At first, the employees didn&#8217;t think the fire was serious. In fact, Ortiz and Mendez left the building, then saw more smoke coming from the roof.

&#8220;A member of the security forces squadron came in the other door at the same time and everyone left,&#8221; Mendez said.

The fire quickly spread across the roof.

&#8220;By the time we arrived on scene, there was heavy smoke billowing out, suggesting that the whole roof was on fire,&#8221; said Master Sgt. Steven Tate of the base&#8217;s fire department.

Tate said more than 30 members of the department responded to the fire, but the fact that it spread so quickly and a shortage of water pressure hampered efforts to put it out.

As a result, the effort quickly turned defensive. Although the restaurant wasn&#8217;t attached to other buildings, there was some risk the fire could spread with the help of the wind.

Of particular interest was the multistory youth center under construction nearby. Aided by the wind, smoke from the fire blew in thick clouds through that building, but the fire didn&#8217;t spread.

Tate wouldn&#8217;t speculate on the cause of the fire. He said authorities would conduct interviews and walk through the facility after the fire was completely out.

Paula Gunderson, the Army and Air Force Exchange Service general manager for Italy, said it was too early to estimate the damage in dollars. But she said that all the restaurant&#8217;s customers and employees escaped unharmed.

Gunderson said employees would be given a few days off, then put to work at AAFES&#8217; other operations &#8212; including another Burger King in the food court in the exchange complex across town. She said AAFES would work with the base to explore setting up a temporary facility on Area 1 to sell food in the next few days.

In the meantime, base officials are instructing people to stay away from the burned-out restaurant.