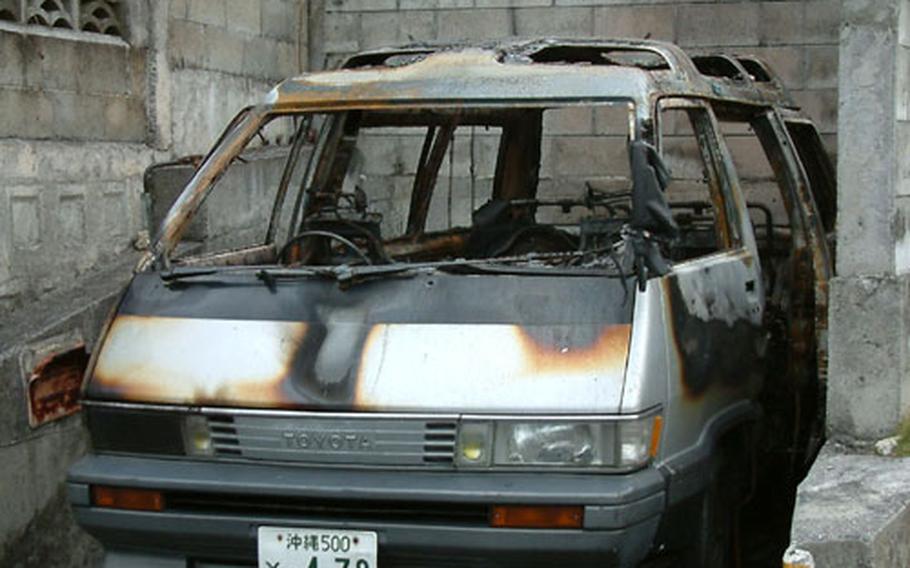 Okinawa police suspect an arsonist set the fire that gutted this van, owned by a Marine, in Chatan early Tuesday. (David Allen / S&S)

Okinawa police suspect the fire was an act of arson.

An Okinawa police spokesman said the fire was reported at 3 a.m. when a neighbor heard several explosions outside his home in the Yoshihara district of Chatan, near Camp Lester.

According to the police report, the van is owned by Sgt. Robert Ortero, 28, assigned to H&S Battalion, 3rd Service Support Squadron on Camp Kinser. Ortero told police he had left three cans of lacquer thinner in the van after he had used the chemical to prepare furniture for painting, according to police.

He told police he had arrived home at 10 p.m. and left the van unlocked.

A neighbor told police he heard at least two blasts and spotted the Toyota Town Ace with &#8220;Y&#8221; license plates aflame. He immediately called the local fire department, which arrived within minutes and had the fire extinguished by 3:27 a.m.

A police spokesman said the fire apparently started at the rear of the van where the cans of thinner were stored along with some old magazines. The case is being investigated as arson, but police had no suspects as of Wednesday morning.