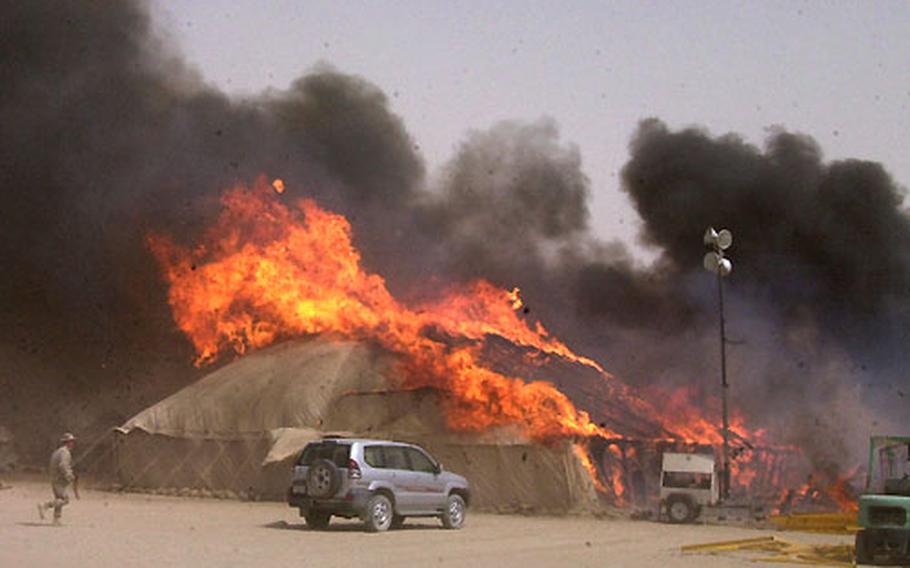 The fire in the first tent spread quickly to three other tents. (Rick Scavetta / S&S)

The fire in the first tent spread quickly to three other tents. (Rick Scavetta / S&S) 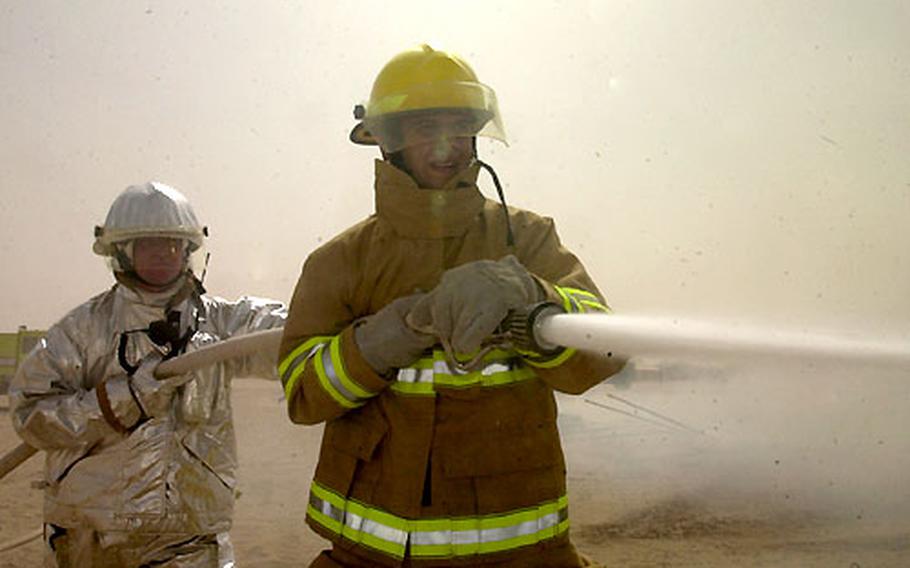 Army firefighter Staff Sgt. Patrick Hurlbert, left, and Brown & Root firefighter Slobodan Trgacevski spray the fire with water, but there was little they could do to stop the fast-moving blaze. (Rick Scavetta / S&S) 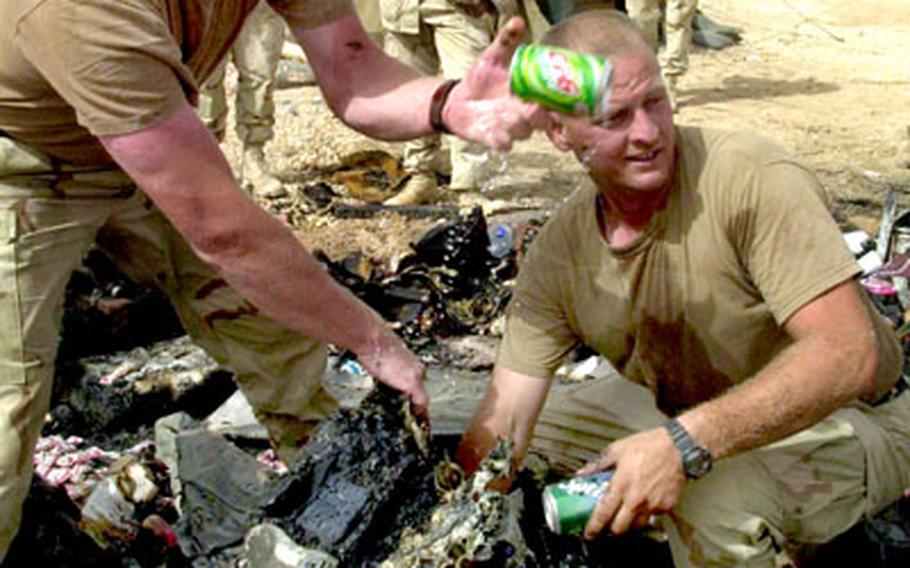 It took just minutes for three festival tents and one small Army tent to be reduced to ashes and smoldering timbers. It was a close call for some soldiers from the Fort Hood, Texas-based 62nd Engineer Battalion, who narrowly escaped the flames.

No soldiers were injured in the blaze. The only casualty was a big yellow lizard, found under charred floorboards.

About 2:15 p.m., flames shot from the first tent. Several 1st Brigade, 1st Armored Division troops watched from their tents several hundred feet away. Within seconds, the tent was engulfed in flames and smoke.

A blast of desert wind blew the burning debris onto a second tent, which was also reduced to timbers in less than a minute. When flames jumped to a third tent, soldiers scrambled to clear away nearby vehicles, screaming, &#8220;Fire, fire. Get out of the tents.&#8221;

In a small tent nearby, the small group from the engineer battalion was checking e-mail and making phone calls home. Spc. Robert White, 39, of Haysville, Kan., had just called his wife Coralee, when he heard the fire calls.

After 58 days in Iraq, Spc. Donald Tharpe, 36, of Wichita, Kan., was lying in the shade behind one of the tents when he saw the sky replaced by smoke and flames.

After firefighters watered down the smoking remains, soldiers sifted through the debris &#8212; charred rifles and gas masks, bags of burnt uniforms and personal effects, and cases of bottled water.

Sandstorms blasted Udairi, a desert camp north of Kuwait City, home to about 7,100 troops either returning from, or heading to, Iraq. Fire hazards are a big concern, said Lt. Col Pete Bosse, the camp&#8217;s mayor.

The three large tents were recently erected for morale activities, Bosse said. One was slated to be an Internet cafe and phone center. Another was going to hold a large-screen television.

Several fire investigators tried to determine the cause of the fire. The large tents, purchased in Kuwait, are sprayed with a water repellent that works as an accelerant, said Sgt. Brady Brever, 31, an Army fire investigator from Racine, Wis.

No sooner had the fire been extinguished, when another fire started in a trash pile between tents nearby. The area was a designated smoking point.

Many soldiers in camp remember watching the dining facility burn down in late February. No one was injured in that fire, but five festivals tents and three cooking trailers were destroyed.