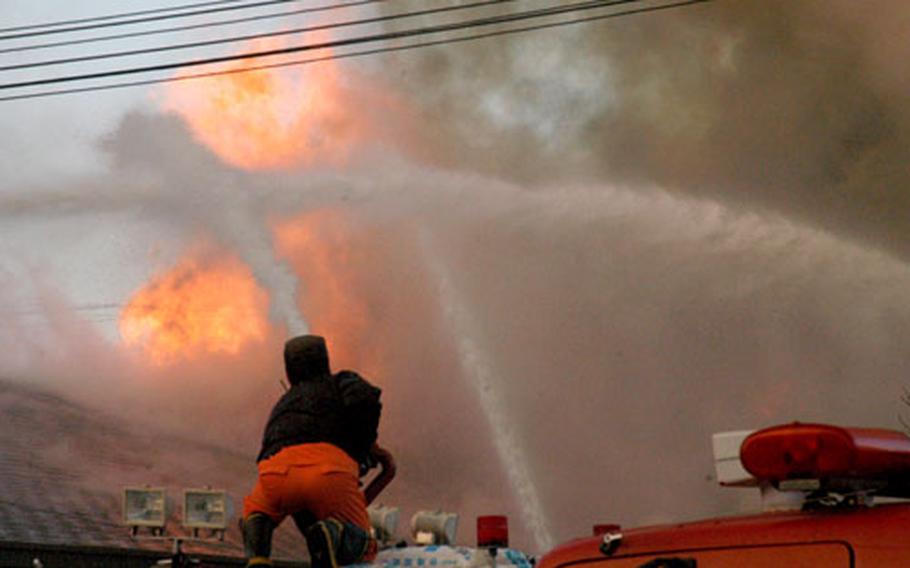 PYEONGTAEK, South Korea &#8212; A fire that roared through an office building Thursday at Camp Henry in Daegu gutted the one-story structure and brought a large number of South Korean fire units to the aid of the Army&#8217;s firefighters, authorities said.

One Daegu city firefighter sustained an ankle injury when he slipped on icy pavement while helping fight the blaze, a city fire department official said. He was treated at a local hospital and released.

No other injuries were reported in the blaze, which broke out in the unoccupied building sometime before 7:25 a.m., about a half-hour before the official start of work.

The fire started in a mechanical room, which contains a furnace, and quickly spread throughout the structure, Putnam said.

Investigators were working Thursday to pin down what caused the fire, he said.

Some 18 fire vehicles and almost 50 firefighters from Daegu&#8217;s Jungbu district joined Area IV firefighters from camps Henry, Walker and Carroll to battle the blaze for more than three hours in cold, windy weather. Camp Walker is in Daegu. Camp Carroll is in Waegwan, about a 30-minute drive north of Daegu.

The Daegu firefighters responded under a standing agreement between the city and the Support Activity to provide mutual fire aid if requested.

Area IV officials said Wednesday afternoon that they could not immediately supply figures on how many Area IV vehicles and firefighters responded.

Post officials closed the Camp Henry main gate to vehicles and pedestrians from 8:30 to 10:30 a.m. At 8 a.m., they evacuated the block-long headquarters of the 19th Sustainment Command (Expeditionary), formerly the 19th Theater Support Command, to protect workers there from smoke. The headquarters is about 50 feet from the public works building, separated by a parking lot, said Maj. Catherine L. Morelle-Oliveira, the command&#8217;s spokeswoman.

The command&#8217;s operations continued at a nearby location and employees were allowed to re-enter the command&#8217;s headquarters by 3:30 p.m. But most had been released from work earlier in the day because of a holiday season half-day schedule this week.

The public works department will set up interim offices in Building 1369, Hamilton said.