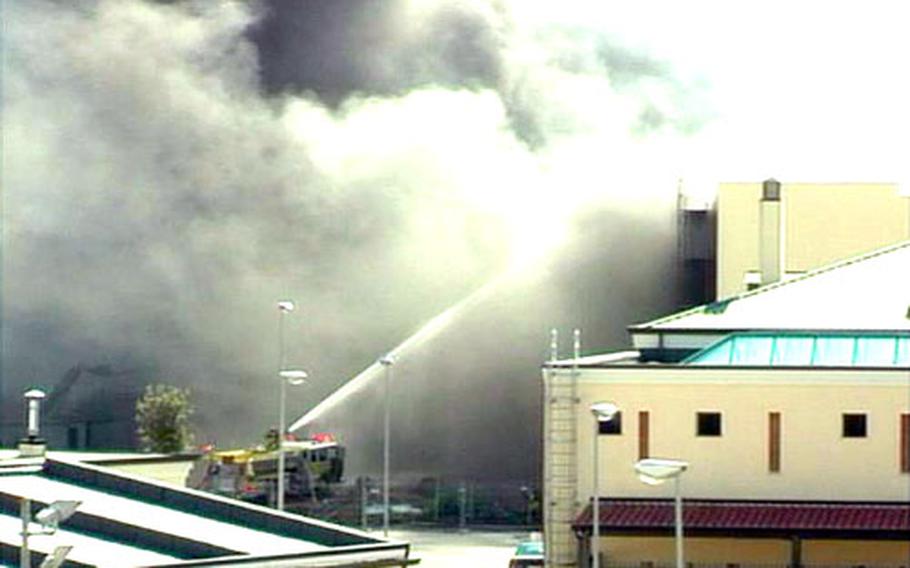 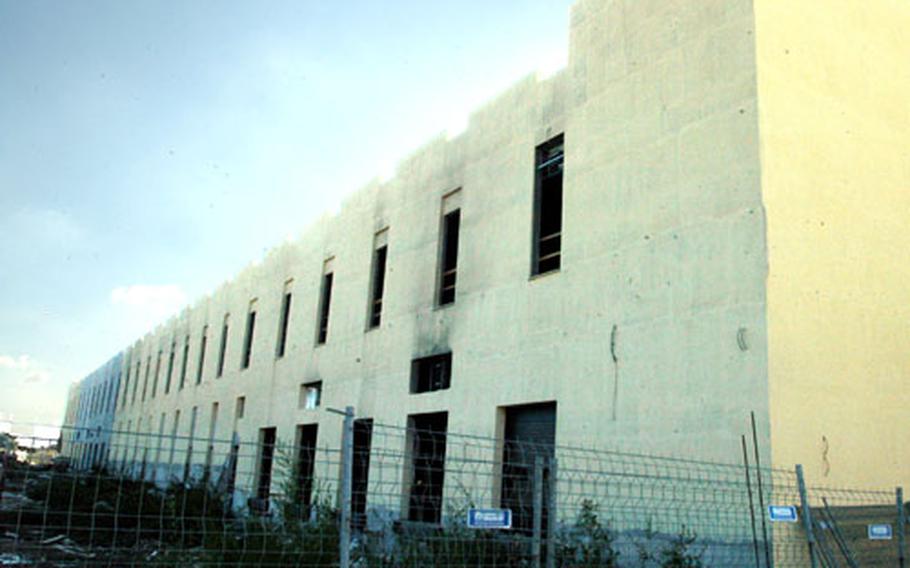 Damage to the outside of the exchange and commissary building under construction at the Naples Gricignano support site is limited to smoke streaks coming from openings in the cement walls. The fire was contained in the area, which was to be the building&#39;s cold storage facility. (Jason Chudy / S&S)

There were no injuries, but the facility received heat and smoke damage on its ground floor, smoke and water damage to its second floor and fire damage to its concrete walls, according to information provided by Naval Support Activity Naples officials.

In an e-mail reply to Stars and Stripes, Naples public affairs officer Lt. Cmdr. Jacquelynn Fisher wrote that she could not give a cost estimate for the damage, stating that the Italian construction company Mirabella will be responsible for its repair.

Navy fire officials reported that a worker using a cutting wheel near flammable insulation accidentally started the fire around 2:15 p.m. Workers attempted to extinguish the fire, but it spread too quickly.

About the same time, a passerby saw smoke coming from the building and reported it to the nearby base fire station, about 100 yards from the complex.

Base firefighters from both the Gricignano and Capodichino stations, and local Italian fire units, responded. Officials also recalled off-duty fire personnel to augment those already at the scene.

Firefighters were able to contain the blaze in a 140-by-80-foot area.

Shortly after 4 p.m., firefighters entered the structure and by 4:30 p.m. had extinguished all fires.

Fisher said that a fire inspector from the nearby town of Caserta will investigate the fire because the facility and land are not owned by the Navy, only leased from Mirabella. The investigation is expected to take about a week.

The exchange and commissary facility is part of the Naples Improvement Initiative, a huge construction boom for naval facilities in the area that has been planned since the early 1980s. Construction on housing and support facilities at Gricignano totaled about $440 million.

Work on support site buildings started in February 1996 and had been expected to be complete by 2001.

Delays brought on by a work-halt ordered by anti-mafia prosecutors in 1999 and by archaeological digs have pushed the exchange and commissary opening date to May 2005.

Fisher said a decision has not been made on whether the opening date should be pushed back.