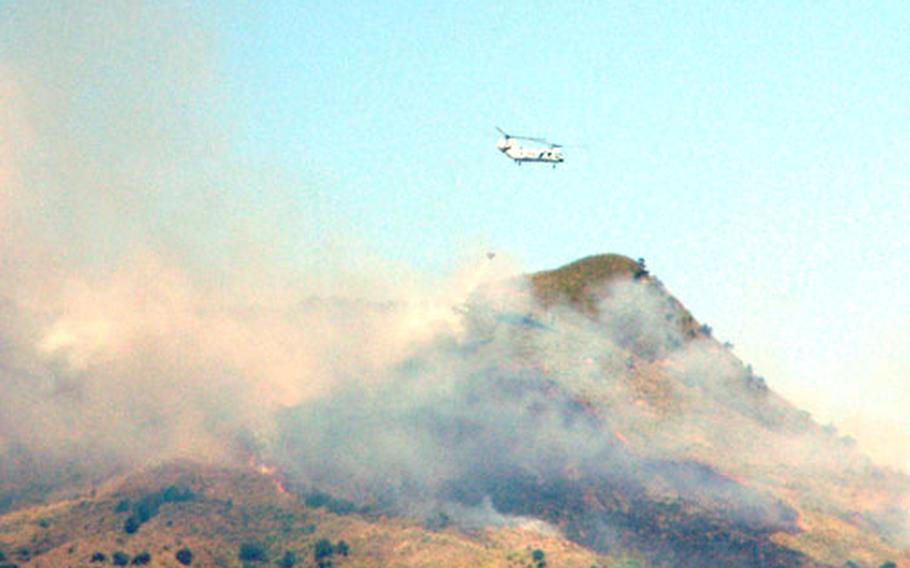 A Marine CH-46 helicopter dumps a load of water Tuesday on a brush fire on Camp Hansen, Okinawa, that began Monday afternoon and had burned nearly 300 acres by Tuesday afternoon. (David Allen / S&S)

The blaze began during the disposal of unexploded U.S. shells, according to the Japan Defense Facilities Administration Naha Bureau.

By nightfall, when Marines suspended their firefighting effort, the blaze had ranged over more than 50 acres.

By midday Tuesday, the DFAB reported the flames had covered some 250 acres.

It is the fourth brush fire in the Central Training Area this month, Tausch said.

Range 2 is on Camp Hansen west of the town of Kin and east of Mount Onna. The fire was contained in an area without buildings southwest of the Okinawa Toll Road&#8217;s Kin exit and just northwest of the community of Igei, off Highway 229.

The closest civilian area is about 550 yards from the burn area, said Masami Nakama, assistant chief of the Kin Town Office&#8217;s military liaison office. The Kin Fire Department dispatched a fire truck to Igei in case the flames spread outside the fence line.

Tausch said the fire was being contained within the Central Training Area and there was no danger of it spreading to civilian areas. The fire appeared to be spreading to the west, away from any populated areas, a DFAB spokesman said.

Concerned residents gathered near a gymnasium close to the base fence line Tuesday, watching the flames and smoke. The air was heavy with the smell of burned brush.