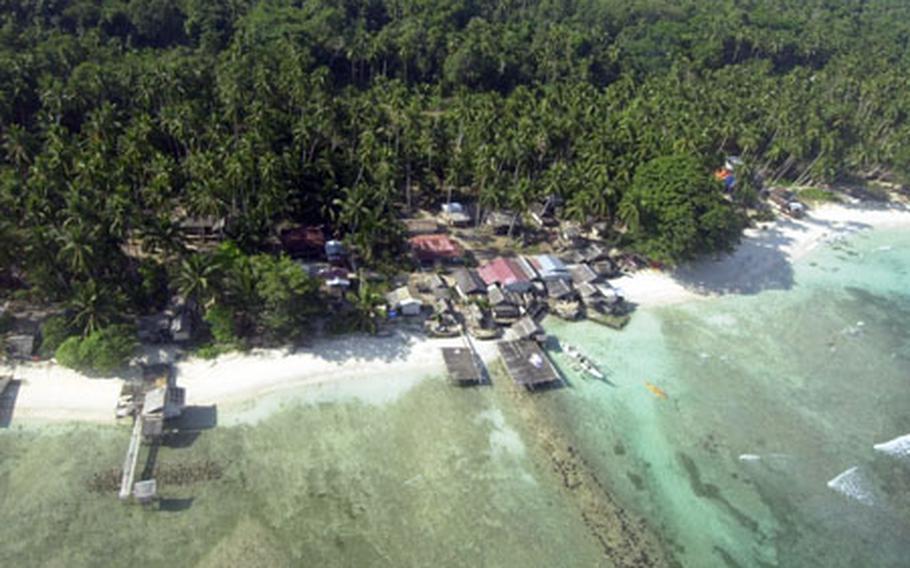 A fishing village is shown from above Jolo Island, Philippines. U.S. and Philippine officials say fighting an insurgency in the island&#39;s heavy jungles - and in other areas in the southern Philippines - is a long, tough task. Many insurgents have friends and family -- and often support -- in villages near where they operate. (T.D. Flack / S&S)

JOLO ISLAND, Philippines &#8212; There is no magic fix when fighting an insurgency, according to officials who are working that problem now in the southern Philippines.

Col. David Maxwell, commander of the Joint Special Operations Task Force-Philippines, briefed Stars and Stripes about the issue during recent interviews in Manila and at his headquarters compound on Mindanao Island.

Key to countering an insurgency is understanding that it is a political problem first and foremost, with implications for the military, Maxwell said.

&#8220;An insurgency will be defeated if the underlying political and socioeconomic causes are properly addressed,&#8221; Maxwell said.

Just about anywhere you find the U.S. forces on the islands, you&#8217;ll find &#8220;most wanted&#8221; posters hanging on the walls. And thanks to some recent successful Philippine military missions, the troops have been able to cross out a few more high-value targets.

The reason, he said, is that it is vital to eradicate the conditions that give rise to terrorism.

During a recent ceremony on Jolo Island, Don Loong, the Sulu Province administrator, gave an impassioned speech about the importance of local people in the battle against the insurgents.

The bad guys are neighbors, friends, relatives &#8212; and the people must demand that they stop the insurgency, he said. The military will never be able to keep watch over everybody at all times &#8212; but the people can keep a close eye on what&#8217;s happening, he said.

The work the United States is conducting in partnership with the Philippines is critical, he said.