Finding the holiday spirit in Africa Christmas carolers brightened spirits at Djibouti&#39;s Camp Lemonier on Friday. Some 1,500 airmen, soldiers, sailors and Marines will be spending the holidays in the Horn of Africa. (Monte Morin / S&S)

Christmas carolers brightened spirits at Djibouti&#39;s Camp Lemonier on Friday. Some 1,500 airmen, soldiers, sailors and Marines will be spending the holidays in the Horn of Africa. (Monte Morin / S&S) 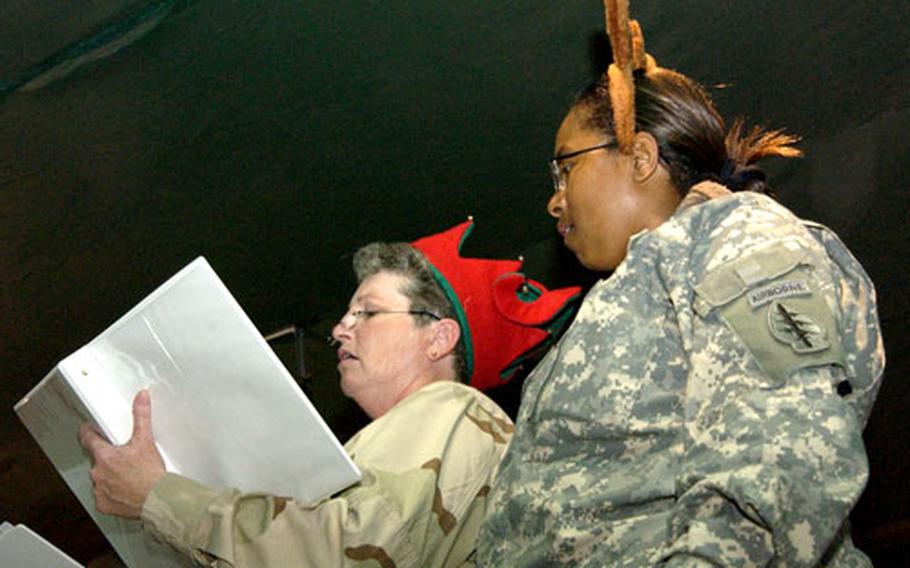 With a trove of hand-woven baskets, mats and other East African wares waiting just beyond the sand-packed Hescoes of Camp Lemonier &#8212; a former French Foreign Legion barracks on the Red Sea &#8212; the 32-year-old Englewood, Ohio, native said there was no better way to kick the holiday deployment blues.

For Popp and roughly 1,500 fellow airmen, soldiers, sailors and Marines, the prospect of spending Christmas and New Year&#8217;s in the Horn of Africa can be a little hard to swallow. While the base is far from the bullets and roadside bombs of Iraq and Afghanistan, the anti-terrorism base sits amid some of the most unstable and poverty stricken nations on the planet.

For Army Sgt. Richard Provitt, 39, of Montgomery, Ala., the recipe for passing the holidays is caroling.

Provitt, a well-drilling specialist with the 334th Engineer Detachment, 844th Engineer Battalion, has spent more than 10 months in the Horn of Africa bringing water to villages in Djibouti and Ethiopia, among other places.

On Friday, Provitt and several dozen fellow songsters wandered the camp&#8217;s warren of tents, singing songs of good tiding before winding up at the enlisted soldier&#8217;s cantina, which was decked out with Christmas lights, an enormous inflatable snow globe and a Christmas tree.

Provitt and the others will spend part of Christmas Eve and Christmas Day caroling at one of Djibouti City&#8217;s hotels.

Many of the military personnel who deploy to the Horn of Africa are individual augmentees &#8212; specialists taken from their home unit and sent to Camp Lemonier individually. Because of this, many are not only spending the holidays away from their families, but they are also spending it away from friends at their home stations.

Lee, who currently works as the project manager for the 334th Engineer Detachment, said he had taken a couple of steps to ensure his own holiday morale remains high.

First, he posted a photo of a snow-covered landscape on his desktop. And he made plans to go skin diving on Christmas Eve.