Finding sweet spot between informative and zany at AFN Buy Photo
Petty Officer 3rd Class Scott Bourque mans the camera during a May 2012 shoot for the American Forces Network at Sasebo Naval Base in Japan. AFN&#39;s commercials can be over-the-top cheesy, but the goofiest commercials are often the best at conveying a message because people remember them. (Matthew M. Burke/ Stars and Stripes)

Buy Photo
Petty Officer 3rd Class Scott Bourque mans the camera during a May 2012 shoot for the American Forces Network at Sasebo Naval Base in Japan. AFN&#39;s commercials can be over-the-top cheesy, but the goofiest commercials are often the best at conveying a message because people remember them. (Matthew M. Burke/ Stars and Stripes) 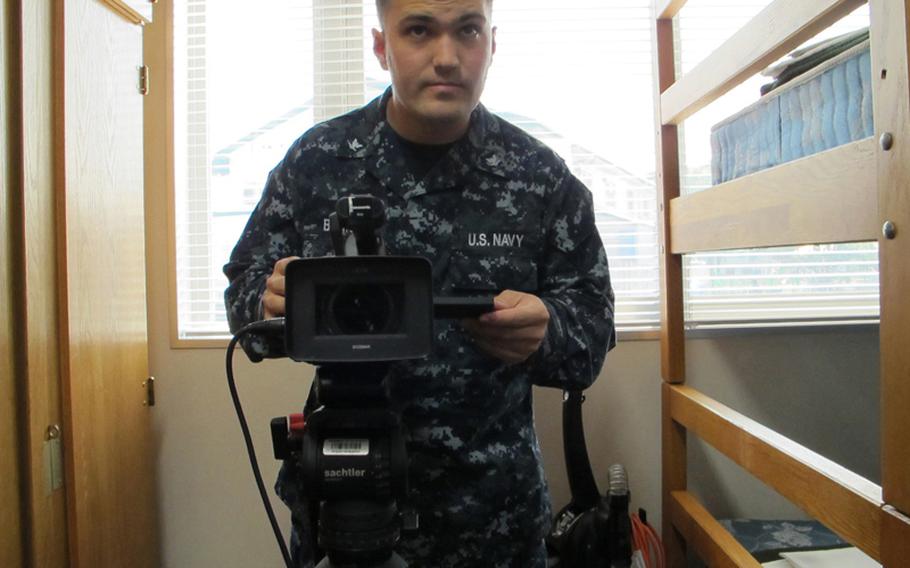 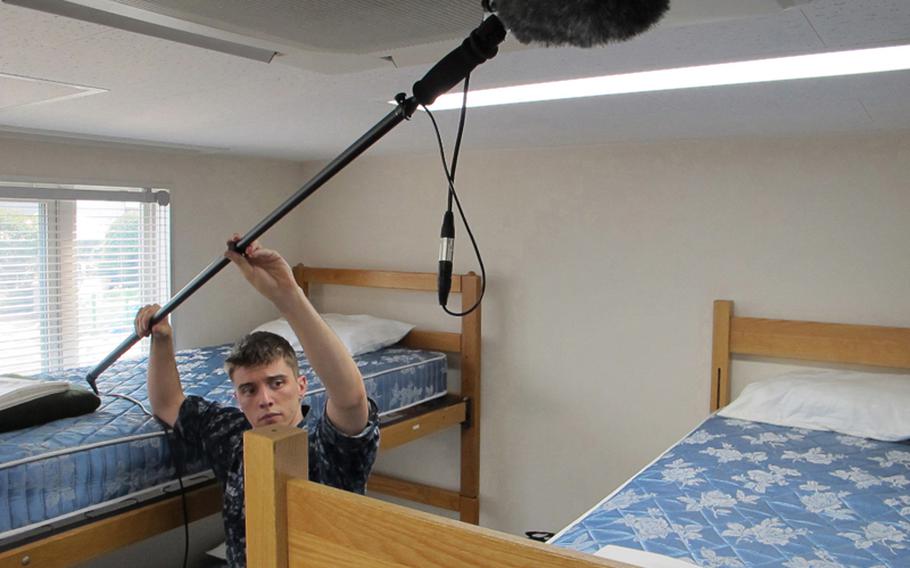 Buy Photo
Petty Officer 3rd Class Scott Bourque has found fame both in front of and behind the camera at American Forces Network. (Matthew M. Burke/ Stars and Stripes) 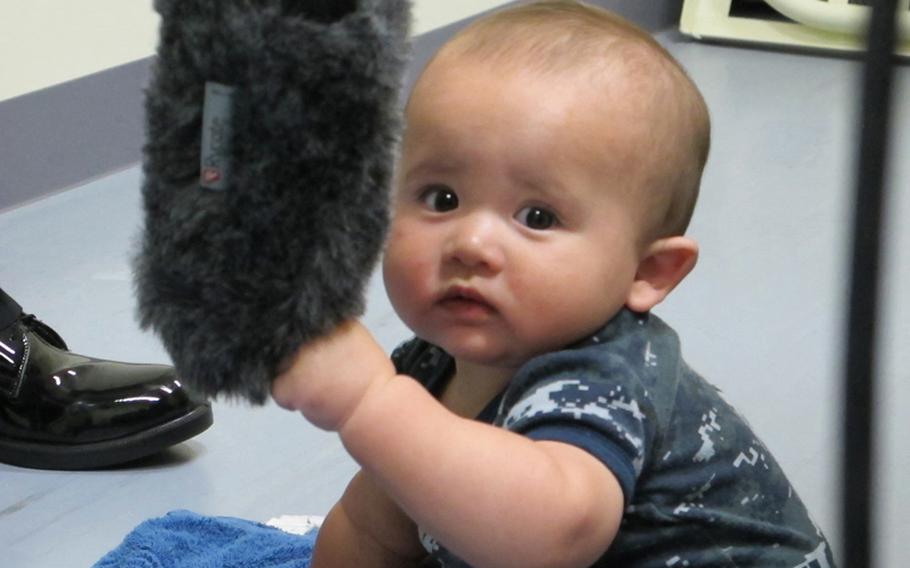 Buy Photo
Brandon Monckton investigates the boom mike while making his TV debut in May 2012 in an AFN commercial for a baby-and-parent fitness program at Sasebo Naval Base, Japan. (Matthew M. Burke/Stars and Stripes) 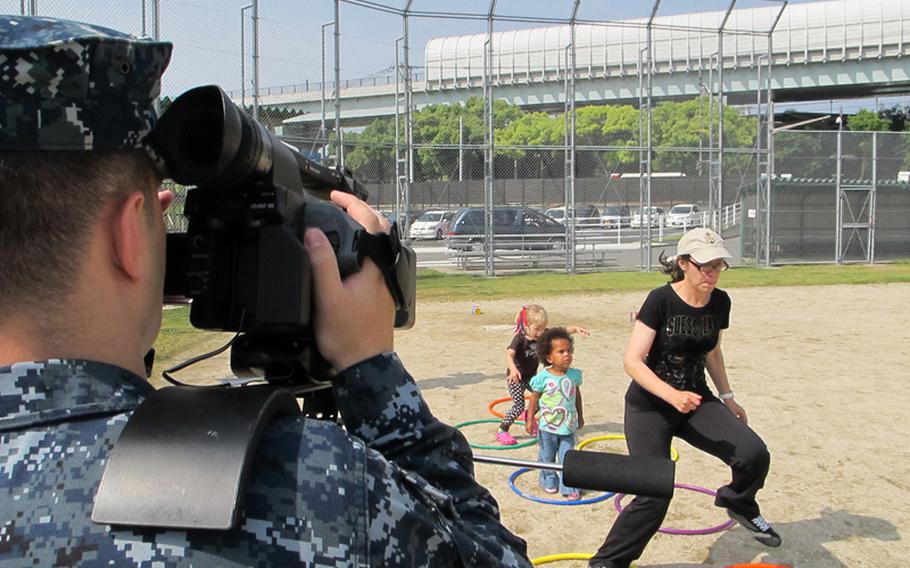 Buy Photo
Petty Officer 3rd Class Scott Bourque mans the camera during a May 2012 shoot for the American Forces Network at Nimitz Park, Sasebo Naval Base, Japan. Bourque recorded parents and their children at a fitness program called Baby Boot Camp for a humorous spot to spread the word about the program. (Matthew M. Burke/ Stars and Stripes) 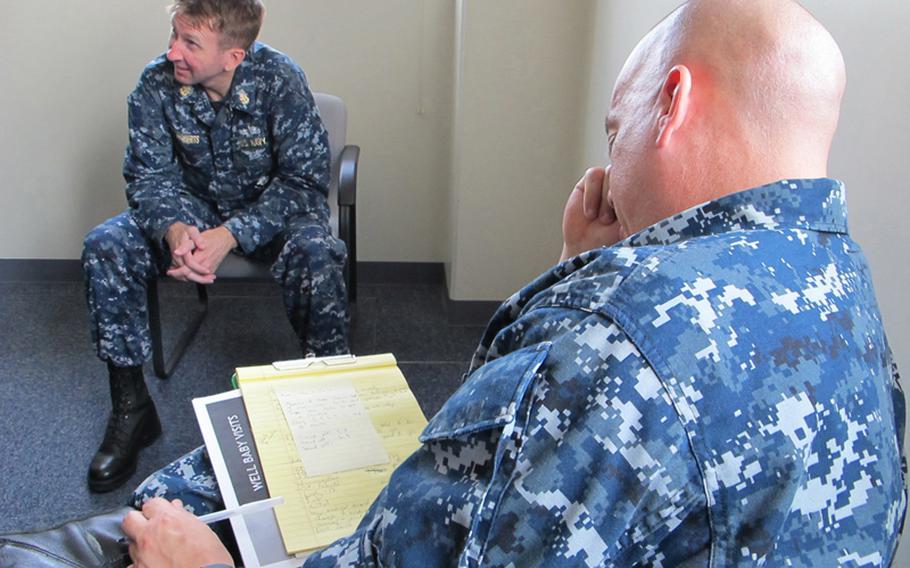 Still, the American Forces Network has generated its own brand of celebrities, thanks to those sometimes wacky, sometimes cheesy but always informative public service spots that air in the breaks where commercial ads would be in the U.S. The servicemembers who make them get to shake off military rigidity and conformity for a while.

&ldquo;Working for AFN is a very unique position within the military,&rdquo; said Petty Officer 3rd Class Scott &ldquo;Bourque Chop&rdquo; Bourque of Scottsdale, Ariz. &ldquo;It allows you to be creative. It&rsquo;s a lot of fun.&rdquo;

Getting a serious point across in an innovative way can be challenging. So at the network&rsquo;s Sasebo nerve center, the AFN team will often resort to humor, playing off a &ldquo;Cops&rdquo;-type car chase and arrest to drive home a point about proper use of government vehicles, or changing the lyrics of a song &mdash; such as LMFAO&rsquo;s &ldquo;Sexy and I Know It&rdquo; to &ldquo;Hungry and I Know It&rdquo; &mdash; to showcase food court offerings.

And just like stateside productions, there are the inevitable reshoots. Bourque was forced to go back to the bustling food court and sing &ldquo;Hungry and I Know It&rdquo; several times, much to his red-faced chagrin.

Bourque has seen his AFN fame stretch far beyond his home at Sasebo Naval base. People have shouted out his trademark catchphrases, like &ldquo;Time for some vigi-games&rdquo; &mdash; slang for video games &mdash; at him in local gyms and stateside airports alike, something he is still getting used to but admits to enjoying.

The spots are as endearing as the network, a staple of military life and the primary provider of radio and television to American forces across the globe.

Servicemembers and civilians surveyed in Sasebo were opinionated about the spots, either loving or hating them. Bourque said that passion is a sign he and his colleagues had ultimately done their job while producing &ldquo;a little American pie&rdquo; for viewers who are far from home.

They also can produce as many groans as trite stateside advertisements, which are not allowed on commercial-free AFN.

&ldquo;A lot of people come up to me and say, &lsquo;Hey, Bourque Chop, what&rsquo;s the deal with AFN commercials? They&rsquo;re so stupid.&rsquo; And I&rsquo;ll say, `Which one are you talking about?&rsquo; They&rsquo;ll say, &lsquo;Oh, the one with the guys dressed up as Mario and Luigi and they&rsquo;re talking about safe driving.&rsquo; And I say, &lsquo;Well, it obviously did its job because you remember it right?&rsquo; That&rsquo;s our job, to make commercials you can remember.&rdquo;

In Sasebo, spots have to be produced weekly for television and are often hashed out on the top floor of the building, a collection of blue uniforms sitting in a circle, pens and pads in hand like network executives.

Ideas are never in short supply and come from command meetings, brainstorming sessions with the staff or via an email or call from a concerned servicemember or officer, according to Chief Petty Officer Michael Roberts, commanding officer of AFN Sasebo.

A spot could address a base issue, like an increase in jaywalking or people beginning to smoke in places where it isn&rsquo;t allowed, or could be used to inform on important issues, such as typhoon preparation materials, suicide prevention resources or physical fitness programs, and be seen across the Pacific theater.

The goal is to squeeze the message into about 30 seconds, but spots can go as long as a minute, Roberts said. For every hour of programming on AFN, there are 14 minutes of spots, half of which are general and produced usually in the states. The other half are made locally.

The staff gathered on a Monday morning in late May to go over assignments for the week and kick around ideas.

&ldquo;It&rsquo;s kind of a complicated process&rdquo; that includes research, storyboards and a script, Bourque said.

Bourque was tasked with a spot to highlight &ldquo;Baby Boot Camp,&rdquo; a joint baby and parent fitness class offered by Morale, Welfare and Recreation. He pitched his idea: Show a baby going through the rigors of boot camp and then show clips from the actual program, using humor to highlight the differences between the two.

&ldquo;That&rsquo;s the challenge,&rdquo; Roberts said. &ldquo;After you come up with the idea, how do you effectively get the message out?&rdquo;

Petty Officer 2nd Class Michael Monckton, an AFN station engineer, and his baby Brandon agreed to starring roles. However, there were concerns.

Everyone at the meeting agreed it was important to keep from traumatizing the infant with yelling. Bourque decided to shoot the baby and the drill instructor separately and splice it all together.

The first shoot took place in the barracks, with Monckton busting through the door to yell at babies who weren&rsquo;t really there. Then Brandon arrived, complete with his Navy camouflage snapsuit. His scene was shot at the AFN station bunkroom that provides shut-eye to weary staffers working around the clock with updates during a typhoon.

As Brandon cooed and rolled around on the floor, trying to grab his daddy&rsquo;s shoes, the cameras kept rolling. Bourque patiently waited to get that small bit of footage that would help sell the spot. Petty Officer 3rd Class Greg House was on the boom microphone.

&ldquo;Working for AFN is not something I thought that I would get in the military,&rdquo; House said. &ldquo;There are a lot of times when someone will walk up to you on the street and they&rsquo;ll say, &lsquo;Hey, thanks for doing that story on us, we really appreciated it.&rsquo; You help people see another side of what is going on, and a lot of people really appreciate that.&rdquo;

A few days later, Bourque put the finishing touches on the spot. He traveled to nearby Nimitz Park to shoot footage of the actual class, then recorded some voice-over work.

The spot was edited before a review, where five or six sailors make sure the lighting, sequencing, shot selection and flow are all up to par. Then they do a final quality check and get the OK from Roberts before uploading it into the system.

When the Baby Boot Camp spot aired a week later, it informed the entire base population about a program that not too many people knew about.

&ldquo;It&rsquo;s a great vehicle to get your programs advertised,&rdquo; said Boot Camp instructor Bridget Barnett, adding that the spot showed others that the group of mothers and their children working out was not &ldquo;intimidating.&rdquo;

AFN falls under the Defense Department&rsquo;s Defense Media Activity, the &ldquo;direct line of communication for news and information to U.S. Forces&rdquo; in 177 countries and territories worldwide, plus ships at sea, according to AFN officials and literature.

The network is tasked with informing millions of active, Guard and Reserve servicemembers, as well as contractors and civilian employees.

The military&rsquo;s radio and television provider has undergone many changes over the years, but took its most recent shape when DMA was established in October 2008 as a part of the Defense Base Realignment and Closure Act, according to Lt. Col. David Westover Jr., commander of AFN Japan.

&ldquo;The mission of the American Forces Network is twofold,&rdquo; Westover wrote in an email to Stars and Stripes. &ldquo;To provide commanders and senior leaders a broadcast media resource to communicate command information; and to provide U.S. military, DOD civilians and their family members stationed overseas a &lsquo;touch of home&rsquo; &mdash; the same type and quality of American radio and TV news, info, sports and entertainment they would be enjoying back in the continental United States.&rdquo;