Finding relevance for today in a Korean War battle U.S. Forces Korea commander Gen. B.B. Bell, left, South Korean Gen. Kim Byung-kwan and other U.S. and South Korean military leaders discuss the tactics that helped U.N. forces win the battle of Hangyeri. Participants attended a "Staff Ride" that took them to Hangyeri and Hongcheon Pass, where the battle was fought in May 1951. (Ashley Rowland / S&S)

U.S. Forces Korea commander Gen. B.B. Bell, left, South Korean Gen. Kim Byung-kwan and other U.S. and South Korean military leaders discuss the tactics that helped U.N. forces win the battle of Hangyeri. Participants attended a "Staff Ride" that took them to Hangyeri and Hongcheon Pass, where the battle was fought in May 1951. (Ashley Rowland / S&S) U.S. soldiers look at photographs and artifacts from the battle of Hangyeri during the "Staff Ride" for senior- and general- level U.S. and South Korean officers. Col. Eric Albert, whose father fought in the May 1951 battle, is second from the left. (Ashley Rowland / S&S) 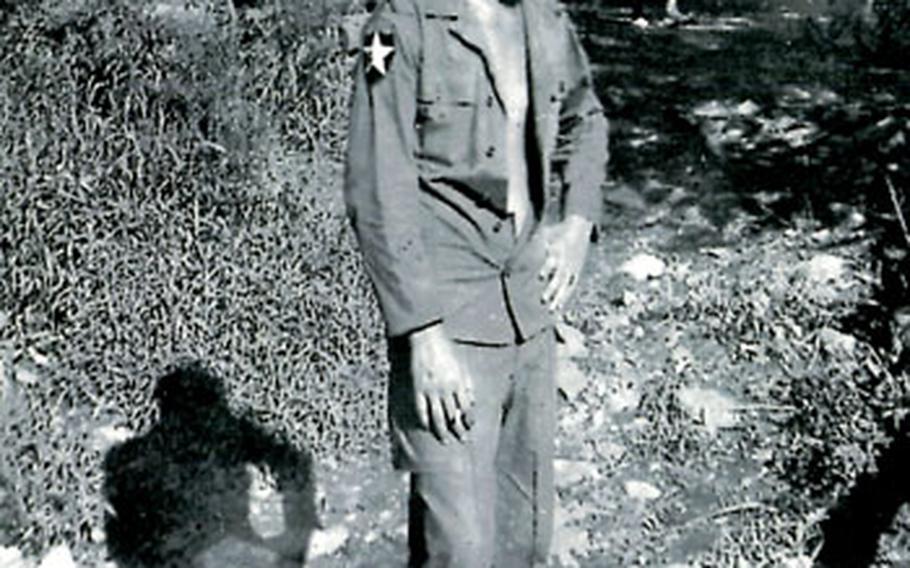 Pfc. Bud Albert, 18, stands at Hangyeri, South Korea, in May 1951. Two days after arriving in South Korea, he fought in a battle against the Chinese. U.S. and South Korean forces won despite being outnumbered, and approximately 20,000 Chinese soldiers were killed. (Photo courtesy of Eric Albert)

HANGYERI, South Korea &#8212; Bud Albert didn&#8217;t talk much about his 15 months at war in South Korea. But when he did, he would tell his son, who dreamed of being a soldier, about digging his heels in the dirt on a mountain so steep he had to point his rifle downward at the enemy.

He talked about fighting for three days with no food or water, and waking up on the third morning expecting to die in a Chinese attack.

And he told his son about standing in a rice paddy, seeing the soldier next to him die from a gunshot wound to the throat, and then running for his own life.

The colonel stood Friday on the mountain pass where his father fought in May 1951, overlooking the quiet, forested chain of mountains and the deep valley where Chinese and U.N. forces clashed 56 years ago. He carried a binder of black-and-white photos taken by his father, then 18, during the Korean War.

About 70 U.S. and South Korean senior officers traveled Friday to Hangyeri, where they were briefed on and discussed the tactics that helped U.N. forces there stop the Chinese advance into South Korea.

That bloody battle at the village of Hangyeri and on the surrounding peaks left 20,000 Chinese troops dead.

&#8220;If you can learn the things that went well and the things that did not go well, you can keep from making the same mistakes,&#8221; said Col. Brian Vines, who helped organize the event.

In March 1951, about nine months after the war began, the communist forces lost Seoul. The Chinese then focused on destroying the South Korean army, so they could isolate and then destroy U.S. forces.

U.S. military leaders expected the Chinese to attack that spring. But they expected the assault to come in the eastern or central part of the peninsula, not as far west as Hangyeri.

The Chinese believed they could sever the link between the United States&#8217; 2nd Infantry Division and South Korean troops there, and they attacked in May 1951. U.S. and South Korean forces were overpowered, but stopped the Chinese forces in several days of battle. Communist and U.N. forces began cease-fire negotiations the next month.

U.N. forces overcame 10-to-1 odds and won the battle because they were adaptable, outmaneuvered the Chinese, and had good communication among experienced commanders, said U.S. Forces Korea commander Gen. B.B. Bell.

&#8220;When you get through talking about all this techno stuff, in the end, you really do get down to brave soldiers,&#8221; Bell said during a group discussion about the battle.