Finding purpose: Nonprofit gives veterans a chance to work with horses – and themselves 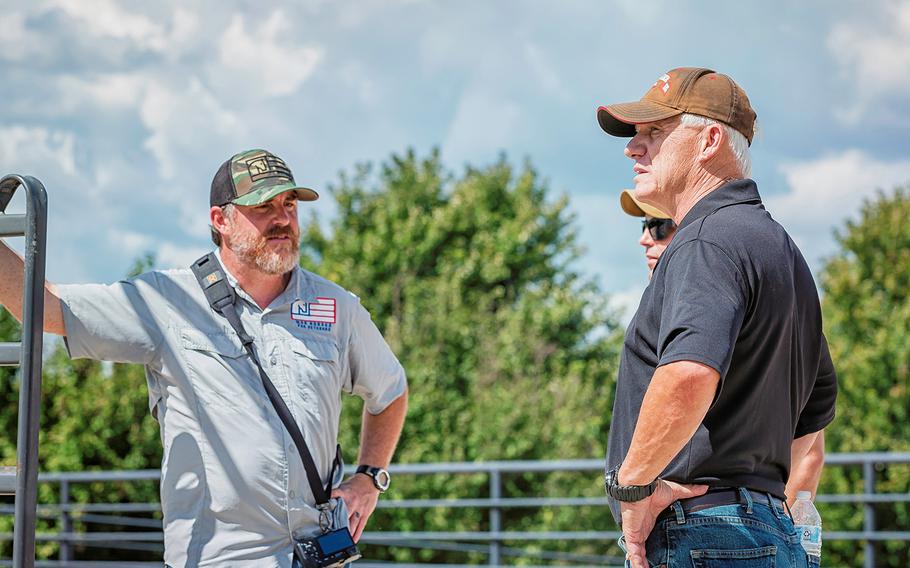 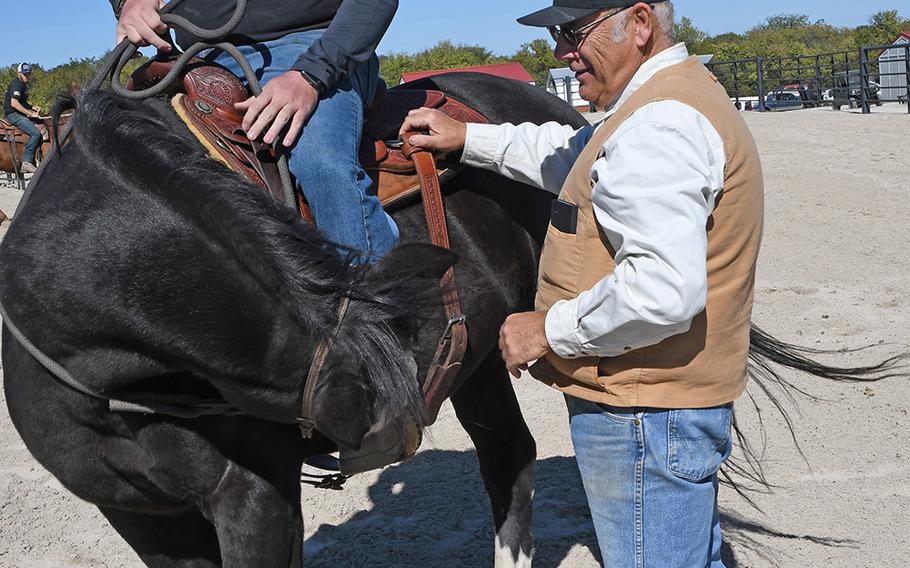 War Horses for Veterans mentor Gary Llewellyn works with a combat veteran on how to perform a one-rein stop. (John Parker/War Horse Media) Patrick Benson, co-founder and director of War Horses for Veterans, explains the importance of relaxing and breathing when you ride, to a combat veteran during the nonprofit's October program. (John Parker/War Horse Media) War Horses for Veterans co-founder and director Patrick Benson teaches some basic riding skills to a combat veteran during one of a weekend retreat at the nonprofit's ranch in Stillwell, Kansas. (John Parker/War Horse Media)

Patrick Benson’s deployment with the 3rd Armored Cavalry Regiment to Fallujah and Ramadi, Iraq, in 2003 impacted him in ways he didn’t understand until years later. It was an exhausting year as an infantryman during the invasion of Iraq, and upon returning home, the veteran of six years left the Army.

“One day, I was driving out of Baghdad and the next thing you know, I’m becoming a civilian and I didn’t know what the hell I was going to do,” said Benson, 39. He returned home to Kansas City, Mo. and started his own business as a clinician in the horse industry. For the next decade, he did well for himself, teaching basic horsemanship and working with performance horses.

An “old-timer horseman” and veteran complimented Benson during a clinic one day and the two started sharing war stories. The man said to him, “You don’t realize it, but they’re fixing you.”

That conversation was the first time Benson really talked about the war with anyone, describing to the stranger the friends he lost and what he’d done and seen.

“I realized that what I was doing with the horses gave me a focus that was more productive than getting drunk and getting in fights. It gave me a presence,” Benson said. “I’d find horses with the most problems and fix them. I realized it was kind of a reflection in the mirror of what was going on with me.

“Over time I realized what I did for a living was saving my butt,” he said.

That personal discovery combined with a desire to reach out to other veterans led Benson, along with his mentors Andy and Patricia Brown, to start the nonprofit War Horses for Veterans four years ago. The ranch in Stillwell, Kan., is a respite where veterans can come and experience a weekend among the nonprofit’s eight horses and network with other veterans and mentors. It’s not conventional equine therapy, but rather a place for combat veterans to find their sense of purpose in civilian life.

The three-day retreats give four to six veterans at a time a break from life’s challenges and the space to meet with mentors to help them with whatever issues the veteran says they want to overcome. It could be employment, alcohol or discovering confidence and stability.

Yes, it’s centered on horses, but the ultimate goal of the nonprofit is to help get veterans jobs, use their education benefits or get help with access to the Department of Veterans Affairs. It’s to get them communicating in their marriage or the community. It’s a journey to get to the person they want to be.

“The program itself is just amazing, and the horse is a very small part of it,” said John Parker, War Horse’s development director and resident photographer. “The rest is about veterans helping veterans. There’s no medication that can do more than a buddy telling you, ‘Hey, I’m going through the same thing.’ ”

Benson agreed. “Horses are the bridge and veterans are their own best therapy,” he said.

Parker spent 20 years as a photographer with the Navy and found his home with the nonprofit.

“It’s the most fulfilling job I’ve ever been a part of. I know we are changing a life every other weekend,” he said.

The program is free for veterans and operates with donations, Benson said. Four years into the program, more than 200 veterans have visited the farm from all over the U.S. Benson has seen veterans move across the country for new jobs, network and help other veterans and start their own businesses. He’s also witnessed them grow in their relationships.

Veterans are allowed to come back as many times as they would like for a weekend retreat, as long as they bring along a veteran who’s new to the program. All that’s asked of attendees is to pay it forward to other veterans.

Units can also host reunions at the ranch and spend time together again. Sometimes the veterans haven’t seen each other since they were in combat together.

“It really is the final touches of bringing you back to finding yourself again,” said Gary Llewellyn, a 71-year-old Vietnam War Army veteran who went through the program and now volunteers with War Horses. As a helicopter scout pilot with the 1st Cavalry Division, Llewellyn spent four months in a combat zone before taking a direct hit with a .51-caliber. He spent 15 months in the hospital and was medically retired in 1970.

Llewellyn said he saw the impact that War Horses had in his own life and continues to see it in others as he volunteers. To be closer to the ranch, he moved from Michigan and volunteers multiple times a week. Between retreats he coordinates volunteers for ranch upkeep.

“Your smile comes back to you — a genuine smile,” he said of his transformation. “You start to feel as yourself, not as you think you should feel. You walk taller. You put your shoulders back. You have an air of confidence about you. That’s just an acceptance that happens when riding the horse that you have taken several steps out of your comfort zone and been successful with them. Once you feel that and lose that anxiety, the fear of doing something wrong, then you walk taller. You’re back.”

When someone spends time with a horse and begins to relax, the two heart rates synchronize, Llewellyn said.

“It’s different between horse and every individual, but it does happen,” he said. “When they relax that allows them to start to open their mind up to release the anxiety and give up all of the things that are holding them down. It seems almost unfathomable that something that quickly can allow you to release your feelings of self-worthlessness, anxiety, fear to talk and communicate with others because they won’t understand what you’re trying to say.

“That is assisted by the fact that we are all combat veterans. We’ve been there, we’ve done that and have (post-traumatic stress) and other issues and found out how to live with them and to succeed. That is the big thing.”

Each veteran can decide what he or she wants to do at the ranch. They can go out and work with horses or ride them, connect with fellow veterans over Midwestern barbecue, or sit by the pool and work on their resume and practice interview questions.

War Horses is also dipping into spouse retreats to help veterans’ partners better understand the issues they face and how to better communicate with each other.

The next step will be programming for emergency service providers and law enforcement. Army veteran and volunteer Jason Klepac is helping with the efforts.

“Law enforcement and fire and EMS, it’s constantly a roller coaster ride. You go from one adrenaline rush to the other,” said Klepac, a police officer in Lenexa, Kan. “Before long, if you stay at that level, if you stay on alert all the time, you never relax and you never come down,” the 40-year-old said. “So for me it’s allowed me a different avenue to go out there and relax and clear my head, work with horses, and when the veterans come in I can transfer all that to them.”

He doesn’t know when or how seeking mental health care became such a bad thing, but Klepac said he wants to help change that through mentoring others at War Horses.

“Me and my wife have to go to the doctor for a biometric screening every year to get the discount for insurance. We all go to the doctor for routine maintenance, just check-ups. We all go to the dentist to get our teeth checked. So why is going to see mental health (professionals) and getting some maintenance done — why is that a bad thing?” he said. “Everybody always sees it as a negative response and that’s why people shy away from it.”

Just as with physical fitness, maintaining the mental clarity of a weekend retreat relies on the veteran to take action. For Llewellyn, he said every day is a choice.

This is where Parker, the photographer, sees his photos come into play. He shares them with veterans as a reminder of their experience at the ranch for those rough days they will surely face in the future. A wife once told Parker she presents the photos to her husband when he is struggling.

“You can see on the Friday that they get there, they still have this shell around them, this protective wall,” Parker said. “They still have that look of a deer in headlights.

“On Sunday all you see is smiles. You see relationships that have formed between the participants that are there, and formed between us and them. Sunday pictures are totally different,” Parker said. “You see relaxation, that’s the big thing.”

That’s a pretty good feeling to walk away with, which is why veterans return to War Horses to volunteer or mentor, Parker said.

“When you leave War Horses for Veterans, you have a team behind you,” he said.