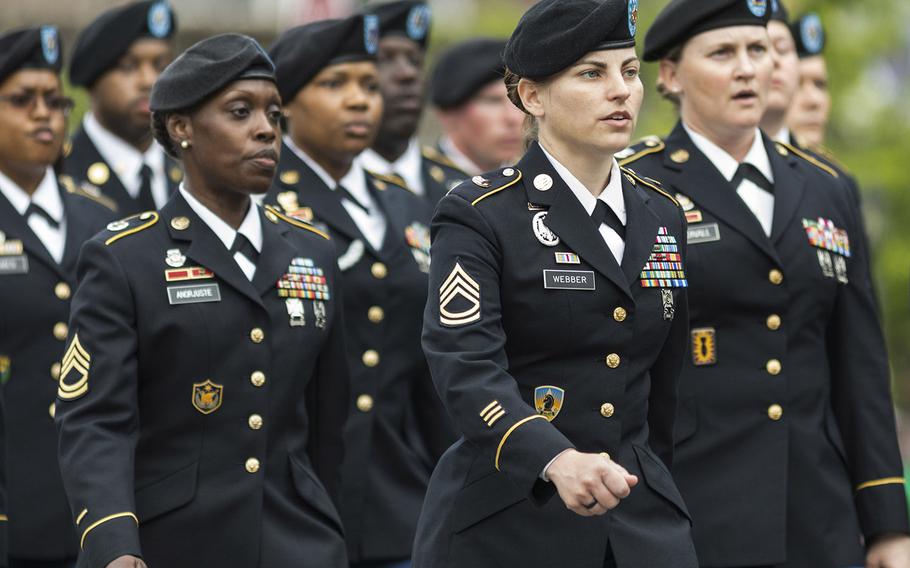 WASHINGTON — Women are the fastest growing demographic in the military, and the number using Department of Veterans Affairs health care has tripled since 2000, according to VA data.

While more women than ever are relying on the VA, it’s still a male-centric system, with predominantly male waiting rooms, exam areas and doctors. Female vets say the lack of gender-specific care, privacy, equitable facilities and security can be barriers to seeking treatment.

“Just having some sensitivity is incredibly important,” said Rep. Susie Lee, D-Nev., chairwoman of the House VA Subcommittee on Technology Modernization. Lee has been involved in veterans’ medical care and women’s health issues. She was one of the sponsors of the Breaking Barriers for Women Veterans Act, which if passed would require the VA to make changes to better serve women. The VA would need to retrofit facilities to support care for female vets, and each location would have to have at least one full-time or part-time women’s health provider. The bill, introduced last year, remains in committee.

The VA has taken measures over the years to address concerns, including women’s care centers, education campaigns, training, studies on barriers to care, and mini residencies on women’s health topics for nurses and primary care providers. Federal data suggests women are happy with VA services overall, but some point to its troubling culture.

A national survey published by the VA in 2019 found that one in four female veterans reported harassment from other veterans at VA facilities.

Jeni Brett, 42, a retired Naval sonar technician, is in therapy at the VA for military sexual trauma. She says she has been a victim of harassment from older veterans at the VA.

“There’s benches outside where there’s guys sitting. If I go by myself, there’s always some old man that opens the door and asks, ‘What’s a pretty lady like you doing here?’ ”

Brett said that the male veterans are rarely overtly inappropriate, but that it’s uncomfortable to be flirted with or harassed every time she shows up alone or is one of the only women around.

“There’s a constant population of old guys that hang out there,” Brett said, referring to the Frank M. Tejeda VA Outpatient Clinic in San Antonio, Texas, where she gets treatment. “They have coffee and doughnuts and guys just seem to be there for the sake of it. It gets crowded; there are men everywhere.”

Brett said the atmosphere makes her reluctant to go for therapy. “I’m not getting the treatment I need because I hate going there, and it makes my anxiety skyrocket,” she said.

Brett, who retired in 2006 as a chief petty officer, said when she does get therapy, virtually all the therapists are male.

“There doesn’t seem to be an urge to get a female with sexual trauma to a female counselor. There needs to be a women’s only clinic and not just for OB-GYN, but a clinic for women veterans to be seen, period,” she said. “We really need a place that’s safe for us. The military wants to pretend we aren’t women and there are no gender differences.”

The VA has established women’s centers across the country with mixed results. In some cases, those centers don’t provide what female veterans say they need, including specialty care.

Julia Lindner-Reid, 48, a retired Air Force officer, had a uterine prolapse when she gave birth, caused by Ehlers-Danlos syndrome, a condition that weakens connective tissue, skin and joints. The disorder has serious complications that affect Lindner-Reid’s health.

She said the VA women’s center in Iowa City only has only one female doctor, and she doesn’t know anything about the rare disorder. Lindner-Reid said she has hit roadblocks trying to find a doctor outside the women’s center — male or female.

“I never got a satisfactory answer about why I had to stay in the women’s center,” Lindner-Reid said. “If I were a man and I didn’t like my doctor, I could try a different one with no issue.”

The issues facing female vets have captured the attention of the Iraq and Afghanistan Veterans of America, which in 2018 launched “one of our most important campaigns ever”: to recognize and improve services for female veterans.

Other veterans service organizations are involved in addressing VA care. The VFW, for example, urged Congress to pass the Deborah Sampson Act, which would expand newborn coverage for veterans who use the VA for maternity care. The legislation would provide other improvements to female veterans’ care.