Finding MIAs' remains in Vietnam is hard work, but fulfilling 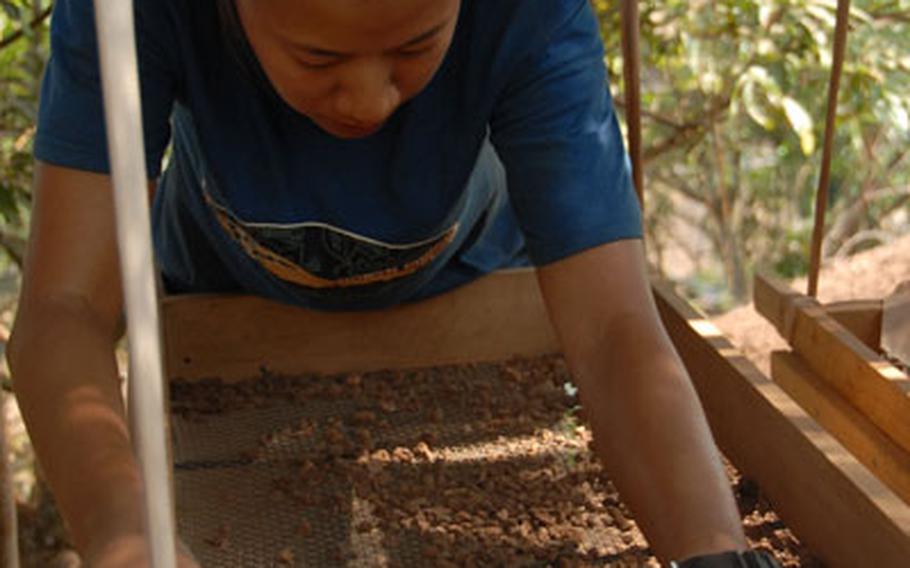 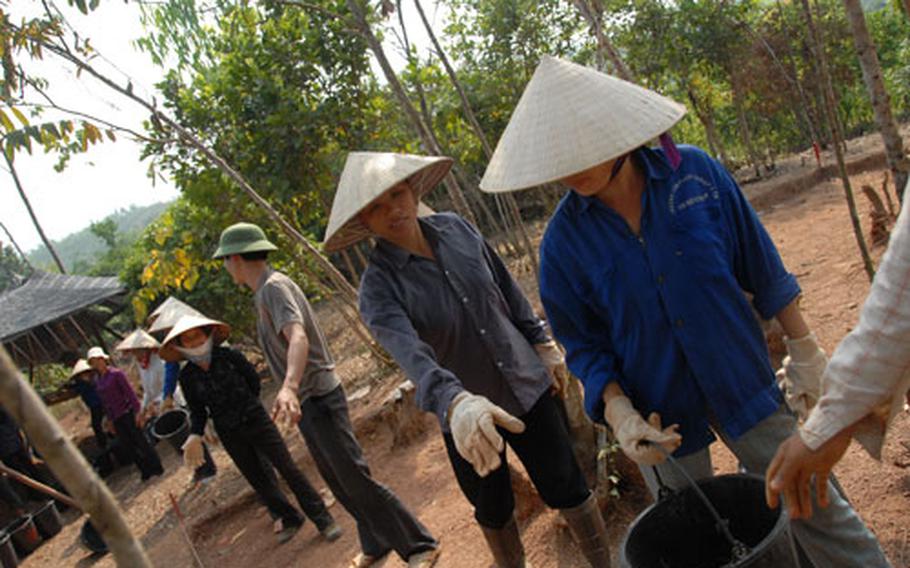 Vietnamese workers pass buckets of dirt from a hilltop dig site to a sifting station, where they and JPAC team members will look for bones and teeth in the dirt. (Ashley Rowland / S&S) 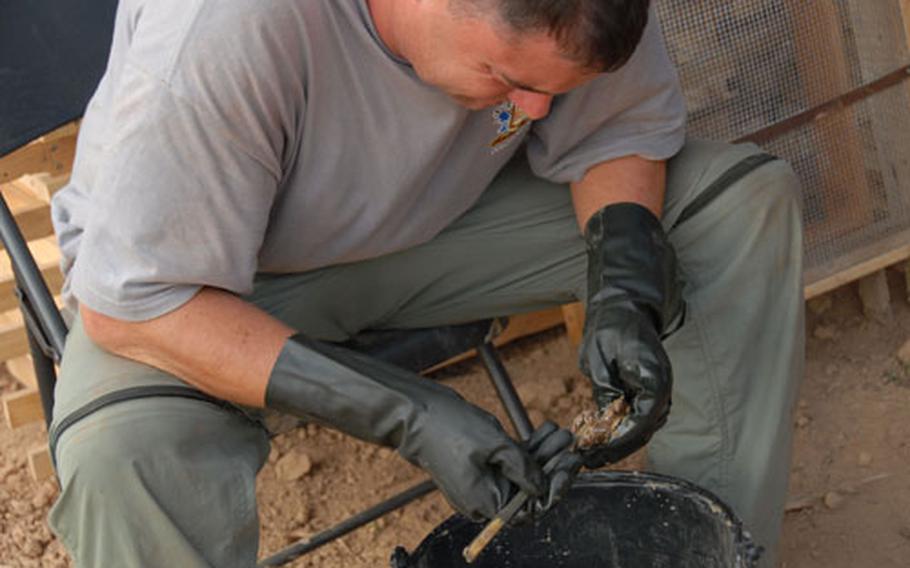 >At the end of a day of digging, Master Sgt. Scott Riker examines debris the JPAC team found after a day of digging in Vietnam. Riker is a life support investigator who can identify what kind of debris the team finds. (Ashley Rowland / S&S) 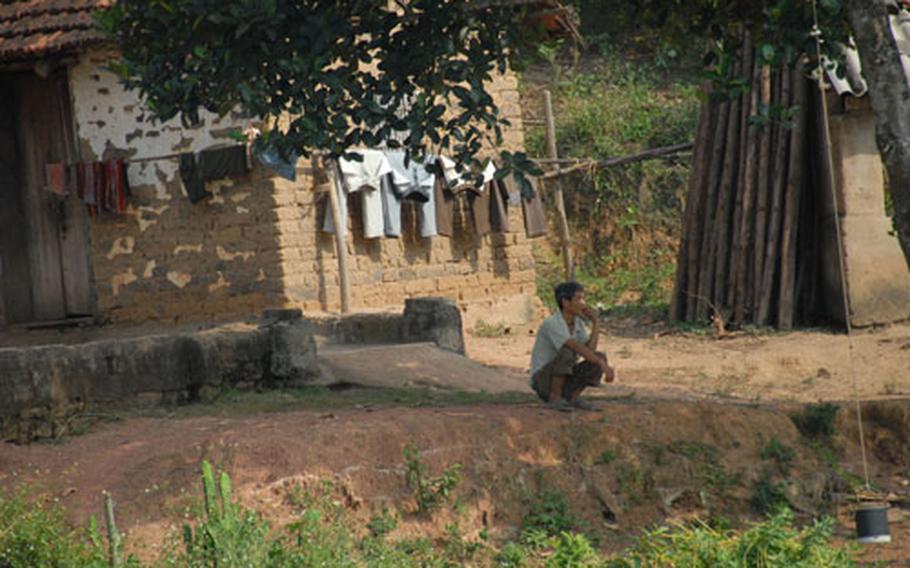 A man squats outside his home in rural Lang Son province, Vietnam, overlooking the rice paddy where an American F-4 Phantom crashed 40 years ago. A JPAC team is digging there for the third time in eight years, trying to find remains of the two-person crew in the jet when it crashed. (Ashley Rowland / S&S)

For Master Sgt. Scott Riker, looking for Americans lost in combat worldwide is like looking for a ghost roaming through an unfamiliar house.

Riker works for the Joint POW/MIA Accounting Command, the U.S. military organization responsible for recovering remains of U.S. troops who went missing in combat, sometimes more than a half-century ago.

He is part of a 17-member team searching for signs of two airmen who disappeared in 1967, when their F-4 Phantom fighter jet was shot down in what was then North Vietnam.

It can take years for JPAC researchers and excavation teams to confirm the deaths of missing servicemembers, many of whom disappeared in remote locations like the one Riker is working at now, in a rice paddy about 40 miles from the Chinese border.

It also takes a lot of money. In fiscal 2008, JPAC plans to spend $10 million in Vietnam alone, and $21 million looking for troops lost during the Vietnam War in that country plus Laos and Cambodia.

Despite the cost and time, most JPAC workers at this excavation site said they would want the U.S. military to look for them if they went missing in combat &#8212; if not for them, then for their families.

Life is difficult for the team. Members spend long hours in the sun, digging and sifting through mud and dirt. They sometimes eat at Vietnamese restaurants, but meals are mostly packaged food they brought from home &#8212; granola bars, tuna, Chef Boyardee, beef jerky. They live in a basic, sometimes not very clean, hotel an hour&#8217;s drive from the site.

Some JPAC teams are stationed in even more remote locations.

While Mills&#8217; team works in northwest Vietnam, two other JPAC teams are camping at excavation sites in the Vietnamese jungle, where snakes are a constant problem.

He also said he would want JPAC to search for his remains, to bring closure to his family and friends.

JPAC teams often don&#8217;t find the remains they&#8217;re looking for. But that doesn&#8217;t mean their time is a waste, said Sgt. Justin Mitchell, who works in mortuary affairs.

Any remains found during an excavation are taken to JPAC&#8217;s identification lab in Hawaii, the largest in the world. It can take years to determine whether the remains belong to the missing servicemember.

Mitchell has worked on nine JPAC missions in the past three years, and he doesn&#8217;t know whether human remains were found during those excavations.

Still, he said working with JPAC is an opportunity of a lifetime. During any repatriation ceremony, when remains arriving in Hawaii are received with full military honors, he feels a swell of pride, even if he didn&#8217;t help find that servicemember.

Americans back home are often surprised when he tells them about his job. Most don&#8217;t realize that the U.S. is still looking for its missing troops.

The U.S. military is among the few that search for its servicemembers lost in combat &#8212; a source of pride to many JPAC team members.

Sgt. Rob Danford re-enlisted when he came back from Iraq so he could work with JPAC, which has workers from all branches of the military. So far, he&#8217;s been on seven recovery missions in Southeast Asia and Europe.

For Spc. Joel Wood, working for JPAC has helped bring him and his father, a former Marine who fought in the Vietnam War, closer.

&#8220;I&#8217;ve seen and I&#8217;ve had family members who are still wondering what happened to their father or husband. When we ID that individual and close the case, they are so appreciative,&#8221; Riker said.

He disappeared in 1950, during one of the bloodiest battles of the Korean War. He was 20 years old.

Pier worried that her brother might have been a prisoner of war, or might have had amnesia and forgotten about his family in Ohio. Over the decades, her parents and two sisters died, always wondering what happened to DiSalvo.

She learned this summer that he died of gunshot wounds. That didn&#8217;t bring comfort to her, but learning that he died instantly and wasn&#8217;t a prisoner did.

She said the time and money spent finding her brother, now buried in a veteran&#8217;s cemetery, were worth it. But his return has been a mixed blessing. Since the day his body arrived in the United States, she&#8217;s been emotional and sometimes has had the &#8220;shakes.&#8221; She believes she&#8217;s grieving again for her brother, and for all of the family members who didn&#8217;t get to grieve for him.

Teamwork is a key part of search effort

Here, in a Vietnamese rice paddy dotted by a few one-room concrete houses, there are no uniforms and members of all four military branches work side by side, digging through the sticky clay and red dirt.

And no earth is moved without the orders of a civilian &#8212; in this case, the anthropologist in charge of the excavation.

The 17 Americans on this Joint POW/MIA Accounting Command mission are looking for the remains of two airmen lost when their F-4 Phantom fighter-bomber jet was shot down here 40 years ago. Team members say the work is different from anything they&#8217;ve done before.

A unit going to Iraq may live and work together for months before a deployment. A JPAC team meets for the first time about 10 days before it leaves Hawaii for its mission.

Team members also have to learn what to do to not offend their hosts. In Vietnam, that means no yelling, no pointing and no palms up.

Officials say mission is worth cost