Sollars Elementary School kindergartners, from left, Samantha Arnold, Aja Martinez and Maurice Robinson hold a paper chain they decorated for the Christmas tree for deployed parents on Misawa Air Base, Japan. The “Lunch Bunch” students recently helped prepare the tree at the Airman and Family Readiness Center with other kids on base who have a parent deployed during the holidays. (Jennifer H. Svan / S&S)

Sollars Elementary School kindergartners, from left, Samantha Arnold, Aja Martinez and Maurice Robinson hold a paper chain they decorated for the Christmas tree for deployed parents on Misawa Air Base, Japan. The “Lunch Bunch” students recently helped prepare the tree at the Airman and Family Readiness Center with other kids on base who have a parent deployed during the holidays. (Jennifer H. Svan / S&S) 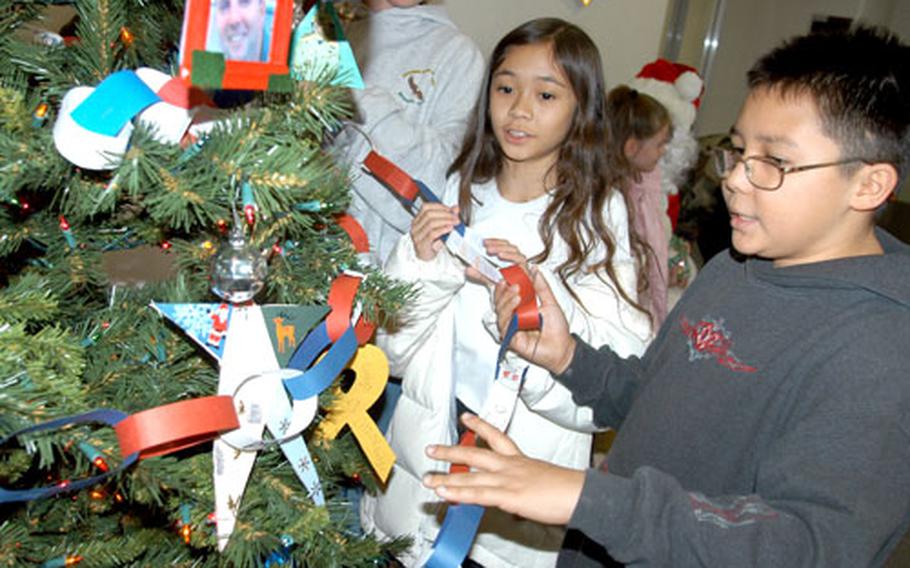 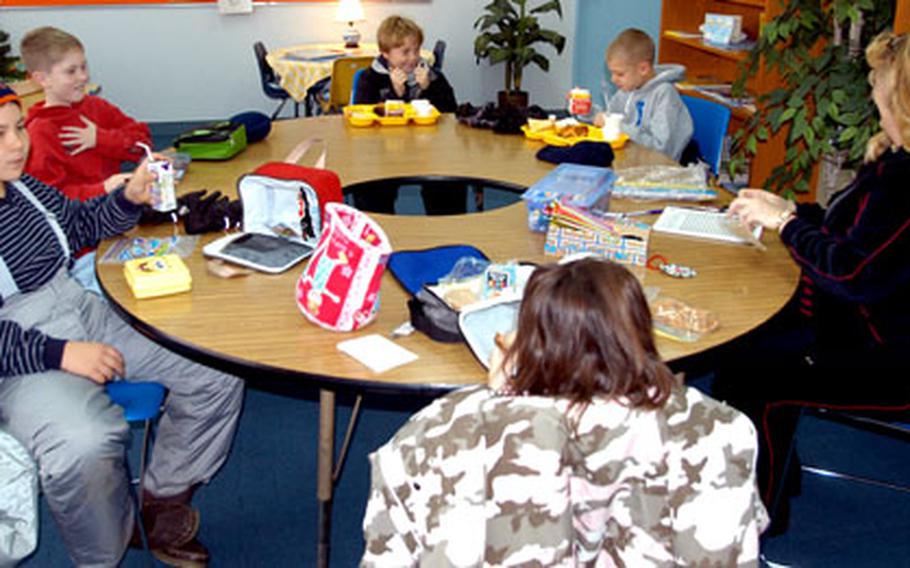 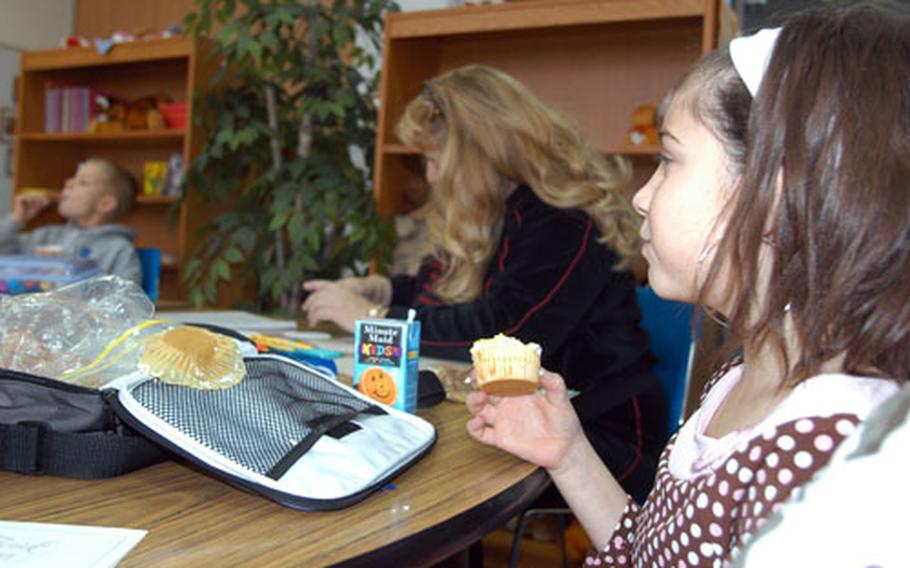 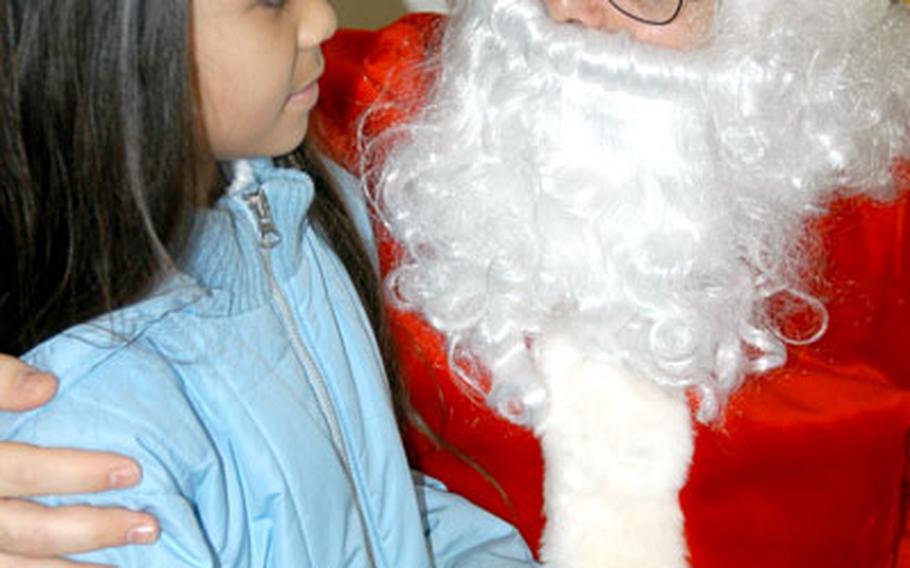 Myriam Huertas, 10, tells Santa Claus her Christmas wishes during a recent event at the Airman and Family Readiness Center at Misawa Air Base, Japan, for students who have a parent deployed. Myriam, who participates in “Lunch Bunch” at Sollars Elementary School along with two of her sisters, said she told Santa she wanted her mom to come home. Master Sgt. Teresa Huertas is deployed and Myriam&#39;s dad, Tech. Sgt. Eliezer Huertas, will soon deploy. (Jennifer H. Svan / S&S)

MISAWA AIR BASE, Japan &#8212; Brady Choban worries most about the bugs. The first-grader told this to school counselor Susan Blake last week while munching on a sandwich.

His mom will soon be deploying. He doesn&#8217;t say where, just someplace where there will be bugs. And helicopters.

Brady seems satisfied with this, and the conversation turns to Dakota Morgan, who happily reports that his downrange dad, who&#8217;s soon coming home, sent him a card that says &#8220;Happy Holidays&#8221; with $6 enclosed.

And so goes another round of &#8220;Lunch Bunch&#8221;: The first-graders listen, eat and share their stories, fears and triumphs.

The Sollars Elementary School program is geared for students in kindergarten through sixth grade who have one or both parents deployed. Kids from each grade meet once a week over their lunch period with either Blake or Leigh Fox, the school counselors.

&#8220;Lunch Bunch&#8221; began in 2002 when Misawa started getting hit with heavy deployments, according to the counselors. And it&#8217;s since grown, with about 50 kids currently involved as Misawa gets ready to send more than 200 airmen to Iraq in support of the January-to-April Aerospace Expeditionary Force rotation.

The program is voluntary. A parent must sign a permission slip. The counselors spread the word at open houses and via parent newsletters. And they rely on classroom teachers to help them identify families with a parent about to deploy or already downrange.

Kids aren&#8217;t forced to attend, but many do, say Blake and Fox, especially the younger ones who say it&#8217;s fun to eat lunch with their counselor and chat with their friends away from the noisy lunchroom.

Sometimes they play games, work on projects or leave early for recess. But often they just talk.

No one is forced to share feelings. Blake begins Lunch Bunch with &#8220;news and announcements.&#8221; That gives the kids an opportunity to talk about their parents &#8212; or something else.

Last week in one of Fox&#8217;s groups, a conversation about Christmas plans prompted one student to report that his mother would be visiting for the holiday and then returning to her deployed assignment until next summer.

Fourth-grader Meghan Schneider, 10, then volunteered that her dad left that day.

Blake has found, especially with her younger kids, having a parent miss special days such as a birthday is particularly difficult.

To help ease those birthday pangs, Blake threw an &#8220;unbirthday&#8221; party for her Lunch Bunch kids in September with cake and candles.

While some of the older students shy away from being associated with a &#8220;deployment group,&#8221; Blake said she keeps them involved by having them help the younger kids with projects, such as baking and decorating Christmas cookies recently for unaccompanied airmen at Misawa.

Blake and Fox said they believe other schools in the Pacific reach out to kids with deployed parents in similar ways.

At Misawa&#8217;s Cummings Elementary School, counselor Deb Young meets with about 20 kids per week who have one or both parents deployed. She doesn&#8217;t call the group anything, just &#8220;something a little extra special that they get to do. I get to touch base with them and get a feeling for how they&#8217;re doing,&#8221; she said.

For the most part, children do amazingly well while their parent is gone, Young said.