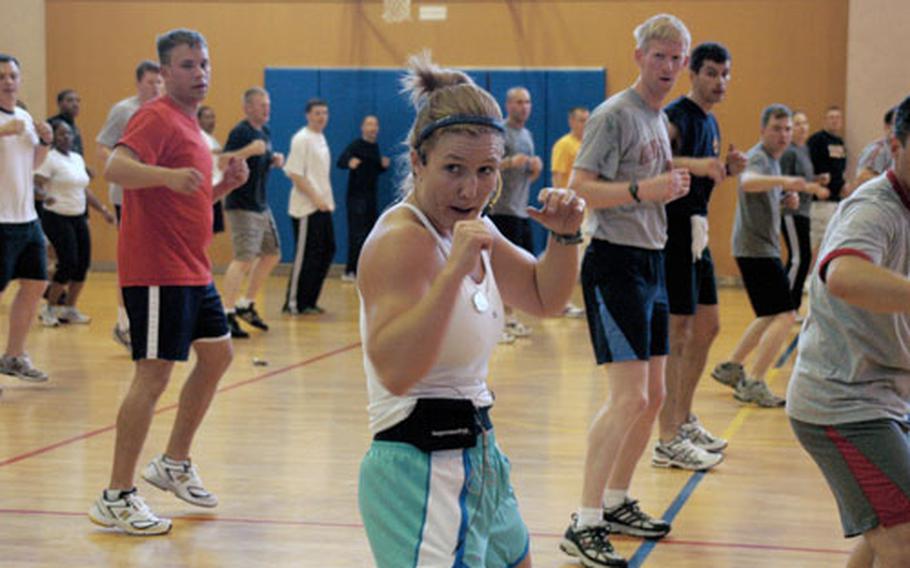 Yokosuka MWR Fitness Director Debbie Deutsch leads the USS Lassen in a kickboxing class July 25. Showing commands that there are more ways to "PT" together other than running is a priority for Deutsch, and Yokosuka offers command classes by request and command swimming three times a week. (Allison Batdorff / S&S)

Fitness centers throughout the Pacific offer units a variety of options to enhance physical training.

At Yokosuka Naval Base, Japan, commands can sign up for classes in swimming, aerobics and cardio &#8220;boot camp,&#8221; said base fitness director Debbie Deutsch.

Offering exercise beyond the &#8220;standard push-ups, mountain climbers and running&#8221; is a priority, Deutsch said recently.

The Wolf Pack Fitness Center at Kunsan Air Base, South Korea, also offers a boot-camp class, as well as spinning, step aerobics and abdominal classes for those wanting something other than just a run, said Master Sgt. Sean P. Houlihan, a base spokesman.

At Yokota Air Base&#8217;s Samurai Fitness Center, Senior Airman Patrice Pineda, who works at the center, said there is a dearth of fitness instructors available to work with units.

But not many units have taken advantage of the opportunities that are available, Pineda said.

Misawa Air Base is already doing that.

Misawa centers also have options such as aerobics classes, circuit training and cardio kickboxing for airmen on mandatory fitness-improvement programs, he said.

Marine units in the Pacific have quite a few options as well, said Carrie McGurk, a fitness coordinator at Gunner&#8217;s Gym on Okinawa&#8217;s Camp Foster.

Units can attend any of the Marine Corps Community Services fitness classes held at fitness centers on Okinawa bases, she said.

Classes are a popular option for units, she said, adding that some individuals are skeptical at first.

Aerobics classes, swimming pools, team sports, tracks, weight rooms and other options are available at most military installations in the Pacific. They are options servicemembers need to take advantage of, McGurk said.

Whatever the method, the results are ultimately up to the individual, McGurk said.