Financial guru on European bases to talk dollars and sense 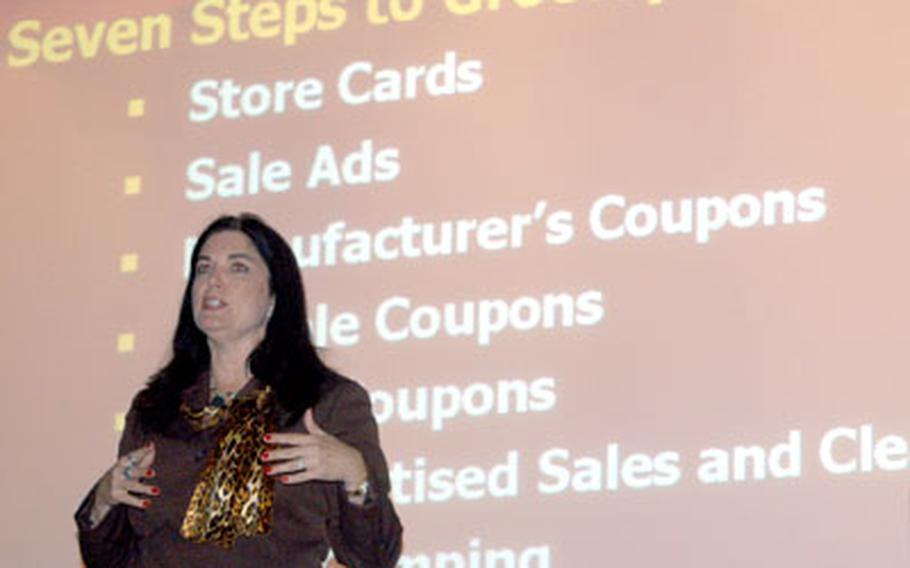 Instead, Kay said, she used her winnings to pay down the $40,000 in consumer debt she and her husband faced.

But she did gain some profound insights from the game show.

&#8220;Bob Barker in real life is orange,&#8221; Kay said to an audience at the Lakenheath movie theater Wednesday morning.

Kay, an author and financial guru whose noteworthy stints include a multipart &#8220;Debt Diet&#8221; series on &#8220;The Oprah Winfrey Show,&#8221; was at Lakenheath on Friday as part of her &#8220;Heroes at Home&#8221; tour, dispensing tips on military life and money to airmen and family members.

Kay recently wrote the book &#8220;Heroes at Home,&#8221; which offers all types of advice for the military spouse. The event focused on both finances and military life.

A former Air Force wife, Kay told the audience that she had five babies in the couple&#8217;s first seven years of marriage and ended up moving 11 times in 13 years for the Air Force, a stat that makes civilian audiences gasp.

The point, she said, is to pay it down and keep focused, no matter how long it may take.

Part of getting on a proper financial path involved reconciling her money habits with her husband&#8217;s.

Kay said she is a born saver, while her husband was a born spender.

Setting aside time to talk frankly about money matters is important to handle finances and keep marriages strong, she said, adding that money issues are a leading cause of divorce.

Military families also struggle with debt as changes of assignments and other needs rack up costs, she said before her speech.

For families outside of the States, it&#8217;s important to strike a balance between the novelty of German furniture or a deal on a BMW with the long-term debt complications.

England and Europe in general are so pricey these days, she said, but financial prudence and planning can help a military family get through it.

Free copies of Kay&#8217;s &#8220;Heroes at Home,&#8221; a guide for military spouses, will be available at local Airman and Family Readiness centers as well.