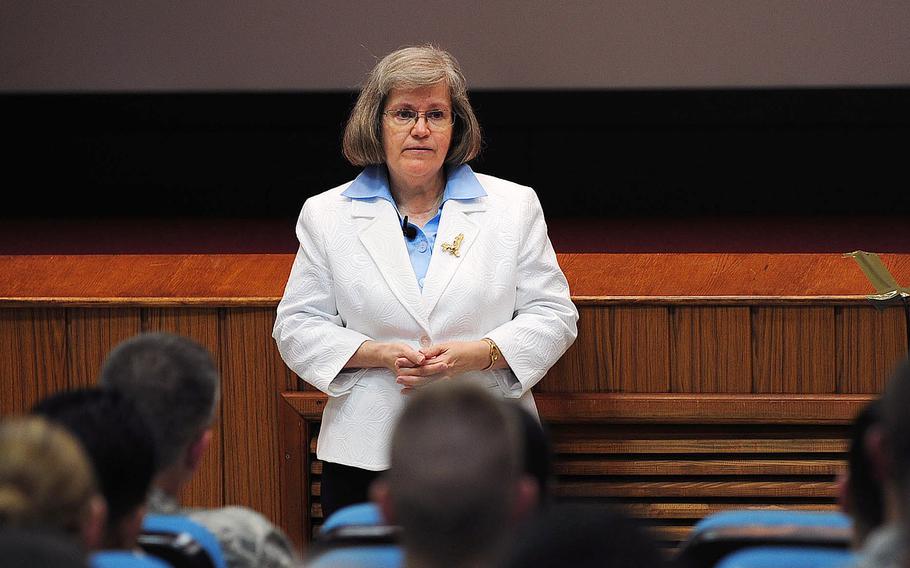 Holly Petraeus, head of the Office of Service Member Affairs at the Consumer Financial Protection Bureau, counsels Airmen on finances May 13, 2014, at Incirlik Air Base, Turkey. (Nicole Sikorski/U.S. Air Force)

NAPLES, Italy — An era of back-to-back combat deployments and enlistment bonuses may be over, but the financial ramifications of a turbulent decade linger for many servicemembers.

Meanwhile, many for-profit colleges see only dollar signs when they look at the military, she said, and new scams are hitting veterans as they seek work or help obtaining benefits.

Speaking here on Wednesday, Petraeus said that while her office and its nine-person staff continue to draw attention to new schemes and scams, existing measures aimed at protecting servicemembers must be strengthened and new ones formulated.

One measure now being reconsidered is the Pentagon’s application of the Military Lending Act, a 2007 law aimed at ending high-interest, short-term loans to military members. The Pentagon originally defined the law as applying to loans of $2,000 or less at a term of no more than 91 days.

“The Military Lending Act was positive when it came out, but the definition of consumer credit that it used was quite limited,” she said. “I think with time it’s been very easy for lenders to just get around that by lengthening the term of their loan or making it open-ended credit and then it’s not covered.”

Another law authorities have struggled to enforce is the Servicemembers Civil Relief Act of 2003, which limits interest on debt before a military member’s service at six percent and requires lenders, landlords and financial companies to recognize the hardships faced by active-duty and deployed servicemembers. The act requires, for example, that banks consider a home owned by a military family to be occupied even if the family does not live there.

The National Mortgage Settlement reached between the U.S. government and major banks in 2012 revealed that many lenders failed to follow the law when considering programs like loan modifications and short sales. A GAO report in the same year catalogued 15,000 instances in which financial institutions failed to reduce servicemembers’ mortgage interest rates as required and more than 300 improper foreclosures.

Petraeus said those mistakes were often due to coding errors in software used by the institution or by customer representatives unaware of the law’s requirements.

“You need to have scripts for them that work, and I think you need to emphasize that if you don’t know the right answer, don’t make one up,” she said. “And we saw that too often.”

Petraeus said enforcement of the SCRA depends on servicemembers’ making official complaints. She pointed to last week’s announcement of the $97 million settlement between student loan servicers Sallie Mae and Navient, which were accused of not providing military members with accurate information about repayment options and of denying interest rate deductions required by the law. The Justice Department acted after CFPB received numerous complaints, Petraeus said.

Other concerns for Petraeus include closing a loophole that encourages for-profit colleges to target servicemembers’ tuition. Federal law prohibits the schools from taking more than 90 percent of their funding from federal student aid, a category that excludes the military’s tuition assistance programs and the post-9/11 GI Bill. An attempt by Congress to close that loophole failed in 2012, and Petraeus said she hopes a new attempt at legislation will succeed.

Veterans and those being separated from the services face their own challenges, Petraeus cautioned. Some scams promise to help veterans retrieve benefits from Veterans Affairs, while others try to hijack pension payments.

Those being separated from the services as the military pares down, meanwhile, are facing an unexpected loss of income, one made harder after years of wartime financial incentives.

“It does concern me that it is going to become more challenging for families to make ends meet that have gotten used to having combat pay and allowances and the income tax relief that comes with that,” she said.

Petraeus was in Naples as part of a two-week tour of bases across Europe. In the three years since she was named head of the military office of the CFPB in 2011, she estimates she has visited more than 80 bases worldwide in an effort to talk to servicemembers and take their concerns to Congress.

“I do get asked back in Washington quite frequently what are the issues, and I want to be sure that I’m answering not just what I think but also what I’ve heard,” she said.