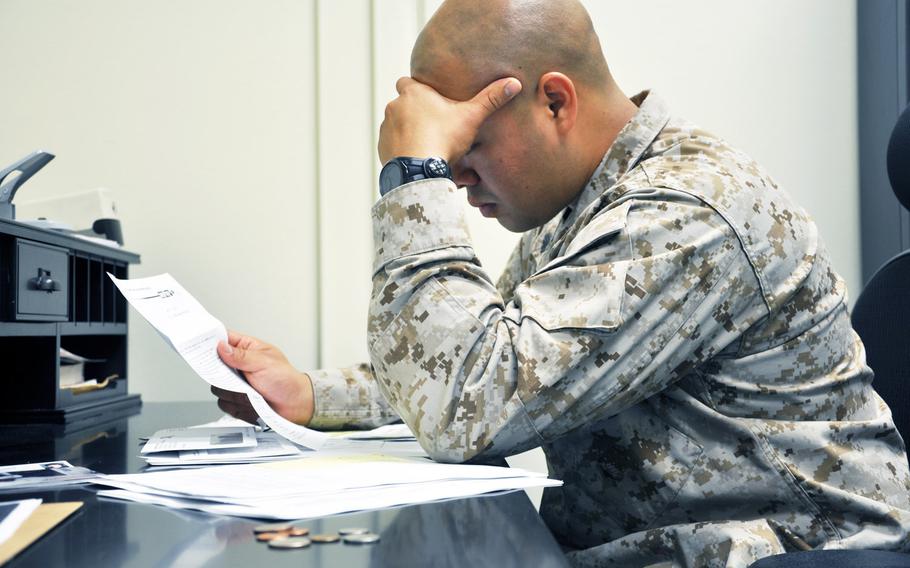 A Marine may be able to keep his or her calm in a combat zone but on the home front there are still many looming threats, including financial security that can bring even the most iron willed warriors into a stressed environment. (U.S. Marines)

A court has ordered an Ohio-based auto finance company that specializes in loans for servicemembers to repay about $2.28 million for engaging in illegal debt-collection practices, the Consumer Financial Protection Bureau said Wednesday.

The order requires Ohio-based Security National Automotive Acceptance Co., which operates in more than two dozen states, to give refunds or credits to servicemembers and other consumers, the statement said. The lender must also pay a $1 million penalty that will go to CFPB’s civil penalty fund, used to “make payments to people harmed by the illegal actions that give rise to civil penalties and who aren’t expected to otherwise get full compensation,” according to the agency’s website.

“(SNAAC) took advantage of military rules to put enormous pressures on servicemembers to pay their debts,” CFPB Director Richard Cordray said while announcing the lawsuit in June. “For all the security they provide us, servicemembers should not have their financial and career security threatened by false information from an auto loan company.”

SNAAC exaggerated potential disciplinary action that servicemembers would face for not making payments on time, contacted or threatened to contact servicemembers’ commanding officers, falsely threatened to garnish wages or misled servicemembers about the legal consequences of not paying a debt, the statement said. A separate court order bans SNAAC from continuing to use such tactics.

CFPB has a history of taking aggressive action against companies that have targeted servicemembers with illegal practices. Last December, the agency, in conjunction with attorneys general from North Carolina and Virginia, filed a consent order in federal court requiring Freedom Stores Inc., Freedom Acceptance Corp. and Military Credit Services LLC to return $2.5 million to consumers and pay a $100,000 civil penalty for using illegal tactics to collect debts from servicemembers.