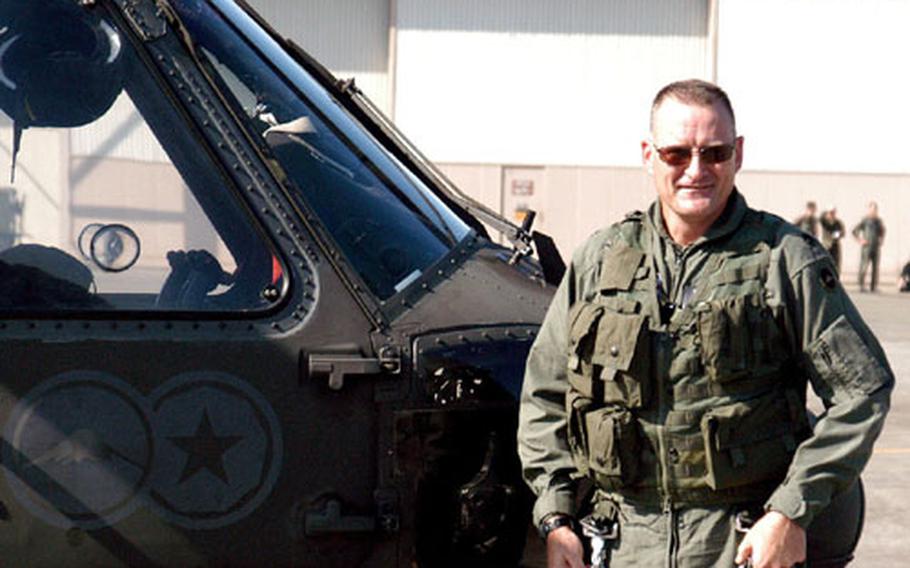 Rodgers, 78th Aviation Battalion commander, will leave behind flying and the battalion he commanded for two years this week to take a staff position with U.S. Army Garrison Japan.

But he also indicates he never forgets that flying, while amazing, is serious business.

The unit flies missions for U.S. Army Japan or any other Department of Defense command that needs it. Its aircraft can fly to Okinawa 800 miles away or across Tokyo. They ferry diplomats and distinguished visitors from all four military services and the state and defense departments.

Rodgers said working in an aviation battalion in Japan is unlike any other. Pilots routinely fly across the massive, congested city of Tokyo, a vantage point other pilots likely would never see. In the States, he said, &#8220;We don&#8217;t fly in the cities &#8212; most of the time we avoid them.&#8221;

The battalion also is unusual for its assets: five Black Hawks and three UC-35 Cessna jets, housed at nearby Atsugi Naval Air Facility. The jets are part of the battalion during peacetime and would switch to a command in South Korea in the event of a conflict.

The battalion flies more than most aviation units outside combat zones. The Army requires 14.5 hours of flight time per month per helicopter; his battalion, he said, averages 20.

The battalion also has one of the best aviation safety records; Rodgers said safety and readiness are the two features of his command he&#8217;s most proud of.

The battalion focuses on readiness to prepare soldiers to deploy or transfer to any other aviation unit. They practice over-water survival, night-vision flights and para-drops for Special Forces, and they train at a range at Camp Fuji to maintain maintain skills.

The battalion has about 60 soldiers and 30 civilian contractors and Japanese Master Labor Contractors, Rodgers said.

He will remain at Camp Zama for the next year, albeit in a grounded position as director of plans, training, mobilization and security for U.S. Army Garrison Japan.

Following Army tradition, after Rodgers&#8217; last flight Monday, battalion members doused him with water from a fire hose, marking the end of a successful flying career.